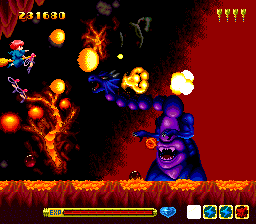 When I think "horror", I don't think of dumb lurching zombies. I think of gruesome beasts with pointy-fanged maws in their stomachs, intent on gnawing peoples' wailing heads off. In other words, I think of Cotton: Fantastic Night Dreams. Just look at that purple creature over to the right -- that thing was pulled kicking and screaming straight from the Berserk anime. That may even be the very beast that devoured Rickett's friends and foster family! Zombies ain't got nothing on this deadly dragon.

If you look closely, you'll see a small red-headed witch riding atop a wooden broom. That's Cotton, the bright-eyed star of this lovable shooter. Cotton just wants candy. Saving civilization from the mouth of madness isn't her goal, even though that's what she'll do by accident . . . assuming your mad gaming skills are mad enough for the task. Cotton's not an easy game. Projectiles abound, and creatures of the night often move more quickly than our petite heroine.

Those creatures are quite numerous, lurking all throughout a frightening night that has fallen upon a once-peaceful village. When I think "terror", I don't think of dirty hallways in need of a janitor. I think of grim forests populated by child-eating trees. I think of dungeons adorned with living statues that exist solely to murder little girls. Cotton weaves through obstacles in all of these areas, accompanied only by the nearly-naked fairy Silk (don't call Silk an "option"; she hates that). Everything else is trying to kill Cotton. Everything else is trying to kill you. 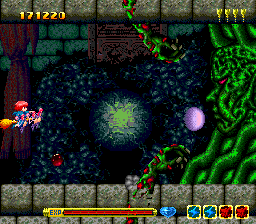 What kind of sick, twisted mind conjures up such deviants as The Carnivorous Giant Plant Man? I imagine a merchant wandering through the forest, eventually stumbling upon a beautiful mandrad -- a plant bearing the face of a human, its mouth locked in an eternal smile, its teeth made of pure diamond. According to ancient legend, the thorns of the mandrad pierce the hearts of greedy travelers, turning them into maniacal shrubbery. Tainted by bitterness, Giant Plant Man's clawed hands rake the sky, swiping and slashing at any young innocent who flies into range.

Any normal children (i.e., not the spell-casting spawn of Satan) caught in Giant Plant Man's grasp would be squeezed until they explode like blood sausages. Being a witch, Cotton is capable of defending herself with powerful spells. Being a young witch, she can only cast a few; Cotton carries no more than four at a time, and if she uses them all, then her standard magical bolts are weakened. That would make Cotton cry. Fortunately, more spells can be earned throughout each stage; after all, what would be the point to a witch without any magic?

Oddly enough, when originally released, Cotton competed with another TurboGrafx little-witch shooter. Magical Chase wasn't as strikingly imaginative, and it lacked CD audio, but it featured a quicker character and shops for purchasing upgrades. People praised its depth. Cotton has none of that. It's a straightforward shooter -- a straightforward but charming shooter that thrives on vibrant artwork and energetic music. It makes the stuff of nightmares feel cute and sometimes even cuddly. Not every game has to change the world to make an impression; Cotton is proof of that.

If you enjoyed this Cotton: Fantastic Night Dreams review, you're encouraged to discuss it with the author and with other members of the site's community. If you don't already have an HonestGamers account, you can sign up for one in a snap. Thank you for reading!

© 1998-2020 HonestGamers
None of the material contained within this site may be reproduced in any conceivable fashion without permission from the author(s) of said material. This site is not sponsored or endorsed by Nintendo, Sega, Sony, Microsoft, or any other such party. Cotton: Fantastic Night Dreams is a registered trademark of its copyright holder. This site makes no claim to Cotton: Fantastic Night Dreams, its characters, screenshots, artwork, music, or any intellectual property contained within. Opinions expressed on this site do not necessarily represent the opinion of site staff or sponsors. Staff and freelance reviews are typically written based on time spent with a retail review copy or review key for the game that is provided by its publisher.