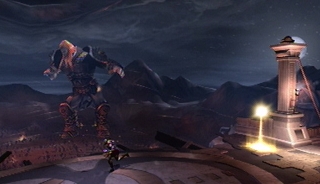 The God of War Collection was a good experience, because it proved one thing to me: almost five years later, the original God of War is still a phenomenal game. Its evocative settings, clever twists on classical Greek mythology, morbid puzzles, and responsive combat still deliver a stellar experience. Episode two, also contained on this disc, continues to mix straight-up fighting with button-pressing and stick-twisting minigames. It's not a style that everyone will appreciate, but those who do won't find the same experience anywhere else.

Imagine! Ares, the God of War himself, lurks in the distance, decimating all who oppose him. Kratos climbs up to the rooftops, grabbing Ares' minions and hurling them to their doom, as Athenian warriors fight undead soldiers upon balconies in the background. Majestic music accompanies the urban warfare.

Deep inside a torchlit dungeon, Medusa slinks into view, accompanied by an Eastern-style melody. This exotic music contrasts against the triumphant fanfares heard before, lending a more personal flavor to the encounter. Smack Medusa's serpentine body, twist off her head, then use its stony gaze to shatter a bevy of minotaurs; battles tax the motor skills.

And before Modern Warfare 2 made us consider our moral complicity in the slaughter of civilians, God of War actually provided an optional incentive for murdering innocents.

Playing the two games back-to-back unfortunately reveals God of War II's relative tameness. There are fewer civilians to be slain, less impalement, and the bosses -- although far more numerous -- cannot compare to the outlandish hydra, giant minotaur, and Ares encounters. What we do get is a little-boy fountain that jizzes while Kratos has offscreen sex. Although more "eventful" than a vase falling and shattering from the force of pelvic thrusts, I can't really call it an improvement.

The first God of War placed its protagonist Kratos in a believable, comprehensible blood feud against a god. Even though the exact nature of this grudge was revealed in piecemeal manner, it was gripping, if gruesomely predictable. Episode two places Kratos in a feud with Zeus, but the cause for their enmity is tenuous. Kratos's actions have somehow imperiled Olympus for reasons that remain unclear. Zeus then wipes out the Spartan army at Rhodes and declares that Kratos will never rule Olympus (which was never his intent). With wounded pride, Kratos vows revenge.

Kratos's petty anti-authoritarianism doesn't carry the same weight as his personal grudge against Ares. In part one, we could cheer for Kratos even though he's a bastard, because his enemy was clearly a bigger bastard. In the second episode, we're supposed to identify with Kratos simply because the establishment is always wrong.

The "series", if you can call it that, is trying to get bigger and bolder . . . but it's actually turning less personal and less meaningful. Although the second part is still a fun game in its own right, this does not make me view the upcoming God of War III as a day-one, must-see-what-happens purchase. This collection reinforces my belief that Kratos's story should have ended after the first episode. Kratos already settled his most personal blood feud. Why should we care what happens next?

BUT FORGET ALL OF THAT. 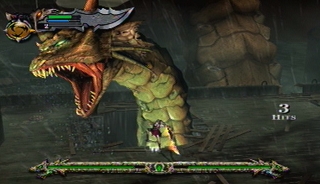 Even though Sony struck thematic gold with the first game, we're not supposed to view God of War as a meaningful tale. We're supposed to view it as a fun action game designed to impress with spectacular Hollywood set pieces. In-game graphics for both episodes are significantly improved, showing off elaborate landscapes, dilapidated temples, and trap-laden dungeons. The cutscenes for part two look spectacular in high definition. Unfortunately, the original game's cutscenes have NOT been remastered; they've simply been expanded to fill the screen. They are therefore blurry and less resolute than the playable portions.

This interferes with moments like the hydra battle. On PS2, the killing blow seamlessly segued into an elaborate death cutscene. It was hard to tell where gameplay ended and cinematic began. This time, it's easy to tell the difference. Kratos strikes the final blow upon the hydra, and as the beast is impaled, the graphics turn to crap! These disparities between gameplay and cutscene infect the formerly perfect transitions with imperfection.

The disc is also not without glitches. While fighting the first Titan in God of War II, I pressed the "quick-time event" key and leapt into the air . . . and struck emptiness, because Kratos flew off into the far-off yonder instead of leaping onto the titan's face as planned. He stood in thin air for a few seconds, slashing at some phantasmal foe, and then fell into a pit and died. Similar glitches happened twice more (one time, he leaped onto the forehead instead of the face) before the quick-time event actually succeeded. I don't know if this glitch was present in the original; even so, it would be silly not to correct it for the collection.

The God of War Collection also does not include the PSP game, Chains of Olympus, which is the game that fans really wanted to play on the big screen. So we've got a "collection" for a three-game series that only contains two games. That's not a surprise; the box is very clear about its contents. Still, while competent, this collection is neither a great value nor a great upgrade. Adding the PSP game is one way -- perhaps the most meaningful way -- Sony could have changed that.

Despite my concerns, both episodes remain enjoyable, and I highly recommend that PS3 owners make sure to at least play through the first. The game looks gorgeous, even though it's almost five years old, and -- even with the blurry cutscenes -- this is the version I'll be playing in 2015. The collection also retains all of the bonus content, so none of the extra unlockable challenges have been lost. It's just a pity that the second half of the collection can't quite hold up.

If you enjoyed this God of War Collection review, you're encouraged to discuss it with the author and with other members of the site's community. If you don't already have an HonestGamers account, you can sign up for one in a snap. Thank you for reading!

© 1998-2020 HonestGamers
None of the material contained within this site may be reproduced in any conceivable fashion without permission from the author(s) of said material. This site is not sponsored or endorsed by Nintendo, Sega, Sony, Microsoft, or any other such party. God of War Collection is a registered trademark of its copyright holder. This site makes no claim to God of War Collection, its characters, screenshots, artwork, music, or any intellectual property contained within. Opinions expressed on this site do not necessarily represent the opinion of site staff or sponsors. Staff and freelance reviews are typically written based on time spent with a retail review copy or review key for the game that is provided by its publisher.