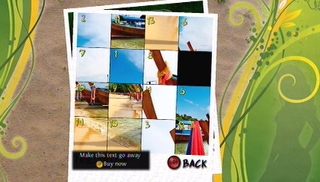 Snowcap Games' 15 Puzzle is exactly what it claims to be: an electronic version of the classic sliding tiles game. Even if you didn't know what it was called, you probably know the one: it's a flat four-by-four grid, containing fifteen tiles and one empty slot. The goal is to slide tiles around until they're in the correct order. Perhaps the tiles form a picture when properly assembled; perhaps they simply display a sequence from 1 to 15. 15 Puzzle competently translates this game to the HDTV screen with some pretty tropical pictures and different difficulty levels. But, competent as it is, this isn't why you bought your Xbox 360.

Nonetheless, some of you will be tempted to purchase 15 Puzzle anyway. After all, it's a casual puzzle game with scenic photographs. Your girlfriend is sure to love it.

You'll forgive the sexist remark because you know it's true. This game is meant to be purchased by insecure guys to appeal to girls who don't play games. In our warped minds, 15 Puzzle would appear to be the key to our fantasies. After a romantic night of Xbox 360, basking in the warm glow of the 40-inch Sony Bravia, the smitten girl would declare, "The Xbox 360 has truly brought us closer together. I'm sorry about mocking your all-night Halo sessions." The gamer-guy, his insecurities washed away like tears in rain, would then turn to his lady and say: "Let's make sweet love."

Of course, that's not how events would actually go down. At best, the aspiring stud would end up sitting on the couch -- bored -- while his girlfriend hogs the Xbox to slide tiles around for an hour or two. And if the bored lad dares attempt conversation, she'll get pissed. Regardless of how often guys are distracted during a Modern Warfare deathmatch, it's unforgivable to interrupt a girl's gaming session. That's why, if you're considering such a devious plan of attack, you should instead download one of the free Windows versions of 15 Puzzle. Some of those even let players create their own puzzles, based around photographs stored on the hard drive! There are a couple nice things about that approach:

ONE: If the girl enjoys the game, you can still play Gears of War or Trigger Heart Exelica while she's busy being boring.

TWO: You can earn bonus points by complimenting your girlfriend's ingenuity after she creates a puzzle based on her new puppy's photo. For even more points, suggest that she make a puzzle based around a photo of the two of you together. Then play Ikaruga while she's busy.

Of course, an insightful and considerate man won't try to "convert" his girlfriend in the first place. He would instead appreciate the diverse perspectives that she introduces to his life. If the relationship is meant to last, she'll support his hobbies in her own way soon enough.

If you enjoyed this 15 Puzzle review, you're encouraged to discuss it with the author and with other members of the site's community. If you don't already have an HonestGamers account, you can sign up for one in a snap. Thank you for reading!

© 1998-2020 HonestGamers
None of the material contained within this site may be reproduced in any conceivable fashion without permission from the author(s) of said material. This site is not sponsored or endorsed by Nintendo, Sega, Sony, Microsoft, or any other such party. 15 Puzzle is a registered trademark of its copyright holder. This site makes no claim to 15 Puzzle, its characters, screenshots, artwork, music, or any intellectual property contained within. Opinions expressed on this site do not necessarily represent the opinion of site staff or sponsors. Staff and freelance reviews are typically written based on time spent with a retail review copy or review key for the game that is provided by its publisher.