Class of Heroes is huge. I remember when my Celestian Valkyrie -- I pervishly call her my angel -- hit level seven. To advance to the next level, she needed 10,500 additional experience. Over ten thousand experience to reach level eight. That's a lot, especially considering I was already 15 hours into the adventure, but the game promised to continue for many, many hours.

Being huge isn't a bad thing. The PSP isn't known for its RPGs (despite hosting the phenomenal Legend of Heroes series), and Atlus's latest dungeoncrawler -- a cute adventure developed by newcomer Zer0div -- fills a niche that was recently re-popularized by Etrian Odyssey. Since these kinds of games don't come along too often, I don't mind spending time with them.

On the other hand, I do mind wasting my time on dull quests.

After enrolling a group of would-be heroes into the Academy (selecting from a HUGE variety of races and majors), the party of six then signs up for classes such as "Fighting Arts" and "Healing Arts" where they're trained how to do things that any RPG gamer worth his or her salt already understands. Did you know that a healing spell heals injured teammates? WOW!

Not every course is easy, mind you, even if the goal is obvious. For the "Hands-On Lesson", my assignment was to kill a particular monster. The instructor even told me where to find this beast, but getting there and slaying the fiendish creature demanded a lot of toil and trouble.

That's a pretty early quest, and dungeoncrawler novices probably won't make it that far, because Class of Heroes' first few hours are brutally difficult. I thought The Dark Spire was tough, but this game is simply unreal. Each character comes equipped with a set of armor that provides ZERO DEFENSE. Wizards can at least toss out a fireball or two, but warriors initially wield feeble daggers. Until players earn some serious money (unlikely) or learn a thing or two about weapon synthesis (more likely), death remains one unlucky random encounter away.

Considering how long the game lasts, I'd call that a missed opportunity. Sure, novices should be forced to master the game's mechanics if they hope to win, but at least let them enjoy 10% of the adventure and get their money's worth!

Oddly, instead of becoming more challenging as I progressed ever onwards, Class of Heroes actually became easier. This was in part due to equipment upgrades; a few points of "evasion" or "defense" made a huge difference. The game also recycles maps across multiple dungeons. Players who fully explore the fiery Pa'Tol Road will be surprised to discover that a huge portion of the Temple at Jetro -- smack dab on the other side of the continent -- uses the same floorplan. I invoked my auto-map, expecting to see a ton of black space, and discovered that everything was already filled in. Thorough exploration early in the game means players won't have to do nearly as much later on.

Each location does feature a unique "inner sanctum", and most contain a unique "labyrinth", so there is some variety between locales. After numerous hours and numerous quests, it quickly became apparent that the recycled maps do not have true "events" on them and serve simply as a time-filler before reaching the inner sanctum or labyrinth, wherein the party encounters knavish thieves, dopey trolls, or hot anime lolitas. It's an artificial way to extend the game's length without actually adding gameplay value. In every other dungeoncrawler I've played, each map is original and contains numerous secrets. That's what makes dungeoncrawling fun: the sense of exploration and wonder at discovering weird new things. Maps that do not need to be explored (since they're the same as previous maps and contain no unique events) clash against the genre's spirit. Class of Heroes may be a dungeoncrawler in presentation, but it's not always a dungeoncrawler at heart.

The occasionally unintuitive menus, lack of battle animations, and absence of music while exploring (but dungeon melodies kick in when you open the sub-menus?!) don't improve the experience, although I mentally coped with those issues pretty quickly.

Basically, Class of Heroes plays like an experimental doujin RPG. By that I mean the game features HUGE amounts of cute content, but some corners were obviously cut. I'm not upset, but I do expect better from a full retail product. 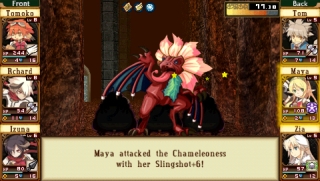 Now that I've told you all of that, I should probably tell you why I so vividly recall my Celestian Valkyrie's ascent to level seven. When she leveled up, her hit points randomly increased by 3. Sometimes they increase by 12 or 18. Randomized stat gains are an outdated concept, but I can live with that. What I can't tolerate are randomized stat LOSSES. Yes, my angel gained 3 hit points, but she actually LOST strength and agility. By killing monsters and earning experience, she became a worse fighter! And it would take 10,500 more experience to possibly earn that strength and agility back! Who in their right mind would actually want such a "feature"?

Since I consider myself to be right in the head, I rebooted the game and replayed that entire section. Class of Heroes lets players save anywhere, but saving after every encounter is a bit too OCD for my tastes, so I had to fight through a few battles to earn experience again. Fight those battles I did, and this time my angel gained strength, agility, vitality, luck, AND 18 hit points. Feast or famine, I suppose.

Other aspects of the game are just as arbitrary. Class of Heroes randomly assigns stat values each time an enemy is encountered. On one attempt, a boss might be super tough and super evasive. Reboot the game and that same boss might get a crappy virtual dice roll. I actually annihilated an advanced labyrinth leader (I had skipped the cute anime babes ahead of her) in one hit, earning a piece of equipment worth 23,200 gold and nearly a thousand experience. For reference, most enemies at that point were dropping about 30 gold.

With that simple victory under my belt, I returned to an earlier dungeon. The supposedly "weaker" boss gave me fits. After a fierce and painful battle, I received 500 experience but NO MONETARY REWARD. I rebooted, put myself through the pain again, and this time I earned an item worth 50,000 gold. I used that money to purchase a quintuple-striking Mithril Sword way before I was supposed to purchase one, and the rest is history.

I suppose you're expecting a final opinion of the game. In response, I'd say that I somewhat enjoyed Class of Heroes when the dice rolls were in my favor, but it didn't have the narrative strength or puzzle-solving depth to keep me entertained for even half of the time I spent on it.

If you enjoyed this Class of Heroes review, you're encouraged to discuss it with the author and with other members of the site's community. If you don't already have an HonestGamers account, you can sign up for one in a snap. Thank you for reading!

© 1998-2021 HonestGamers
None of the material contained within this site may be reproduced in any conceivable fashion without permission from the author(s) of said material. This site is not sponsored or endorsed by Nintendo, Sega, Sony, Microsoft, or any other such party. Class of Heroes is a registered trademark of its copyright holder. This site makes no claim to Class of Heroes, its characters, screenshots, artwork, music, or any intellectual property contained within. Opinions expressed on this site do not necessarily represent the opinion of site staff or sponsors. Staff and freelance reviews are typically written based on time spent with a retail review copy or review key for the game that is provided by its publisher.