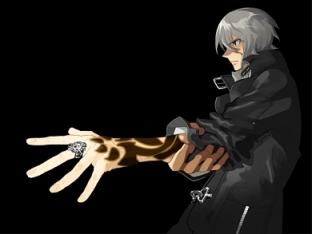 The gorgeously-packaged Lux-Pain begins with a thrilling animated introduction that manages to make people standing around look really exciting. The heroic but cold-hearted Atsuki Saijo gesticulates like a teen possessed, showing off his artificial arm and prosthetic golden eye. Fellow F.O.R.T. members Nola and the loli-goth Natsuki show off their own stylish methods of... standing around.

The aforementioned F.O.R.T. is a secret psychic organization. They stand around and talk a lot. When not standing around, they hunt down evil soul-sucking bugs called Silent that manifest themselves via powerful emotions called shin'en. These emotions -- happiness, sorrow, hope, nostalgia -- look like worms. The presence of shin'en doesn't necessarily mean someone is infected with Silent, by the way. Sometimes an emotion really is just an emotion.

The main character -- Atsuki Saijo -- busts into peoples' hearts and reads their emotions. If he finds a Silent, he whacks or slices it with psychic brain energy. Why does Atsuki hunt these spider-like bugs? Because a Silent-infected fiend murdered his family, chopped off his arm, and pierced his eye -- that's why!

This somewhat confusing but potentially cool premise sets the stage for what turns out to be a rather dull visual novel. I'm not suggesting that visual novels are dull, mind you. The superbly-translated Eve Burst Error was a brilliant mystery. Alas, poor Lux-Pain simply cannot compare even to "solid" titles such as Desire.

The game's basic mechanics aren't an issue. By nature, visual novels contain enormous spans of clicking and reading text, but Lux-Pain intersperses imaginative "scratch" scenes to break up the potential monotony. Basically, players rub madly at characters' bodies to reveal emotions, which then manifest on the top screen as weird poetry accompanied by creepy music. This is a neat use of the DS to connect players to the events transpiring around them. That's what Lux-Pain does well.

The game's primary failure is a very basic one: the story just isn't compelling. One important element for any visual novel is believable characters. Some of Atsuki's classmates manage to avoid standard stereotypes (the fortune-telling blonde is particularly refreshing) but several of the villains are simply outrageous. One early baddie -- a bald man with evil pointy ears and creepy narrow stalker eyes -- repeatedly professes his love for guns and hatred for schoolchildren.

You're expected to believe that this man was actually hired as a teacher.

Another important element for visual novels is emotional delivery. There are several murders and suicides scattered throughout Lux-Pain (some preventable, some pre-destined). A few of these moments were flawed from the start -- a girl who has demonstrated a desire to live suddenly decides that suicide is the answer. Spend too long searching for her, and Atsuki simply receives a phone call saying that someone else will look for her instead.

GAME OVER
Well, wasn't that exciting.

Other dramatic moments (as well as many ordinary moments) are marred by the poor localization. The dub's delivery -- when there's any voice-acting at all -- is coherent and natural. Those are good things. Unfortunately, the dub doesn't match the onscreen script. The text has an unfortunate tendency to mess up in embarrassing ways; at one point, Atsuki talks about "him not hurting anyone" and "him not going to the police".

The problem is that Atsuki's talking about a girl.

At another point, a nice lady was knifed by a "killer". One of the lady's co-workers expressed irritation that she had been "killed".

I was rather surprised to discover that she was in the hospital. Alive.

No, it was not supposed to be a secret.

Keep going and there are some genuinely cool bits, including a creepy but emotional moment of brilliance when Atsuki uses his extra-sensory powers on a corpse. The dead body's last wishes and final regrets were surprisingly touching. Such rare moments are unfortunately surrounded by banter about "odo-sensing machines" and "kee-chan dool". I'm pretty sure it was supposed to be doll, but either way... I just can't bring myself to care about a grown man's doll.

If you enjoyed this Lux-Pain review, you're encouraged to discuss it with the author and with other members of the site's community. If you don't already have an HonestGamers account, you can sign up for one in a snap. Thank you for reading!

© 1998-2021 HonestGamers
None of the material contained within this site may be reproduced in any conceivable fashion without permission from the author(s) of said material. This site is not sponsored or endorsed by Nintendo, Sega, Sony, Microsoft, or any other such party. Lux-Pain is a registered trademark of its copyright holder. This site makes no claim to Lux-Pain, its characters, screenshots, artwork, music, or any intellectual property contained within. Opinions expressed on this site do not necessarily represent the opinion of site staff or sponsors. Staff and freelance reviews are typically written based on time spent with a retail review copy or review key for the game that is provided by its publisher.