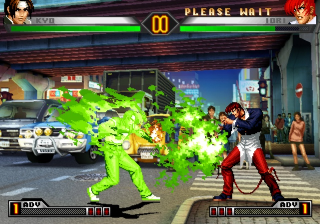 My first King of Fighters experience was the Dreamcast's Dream Match 1999, which was actually a remake of The King of Fighters '98. For 1998, SNK re-assembled their greatest modern warriors for one grand battle before moving on to a new storyline and new roster. Dream Match was intended to infuse this ultimate battle with 3D backgrounds and CD-quality audio that the NeoGeo couldn't produce.

I was shocked by the super-smooth gameplay. It was slick. Slicker than any fighter I'd played to that point. Unfortunately, the 3D backgrounds were distractingly poor, and the music reset after each round instead of playing through an entire match. I couldn't get past the misguided audiovisuals, so I shelved Dream Match.

The tale above -- and my preference for other, later KOF titles such as Evolution -- brought about many scornful internet glares. Diehard fans insisted that 1998, in all its iterations, was the best episode. This had been determined by Absolute Cosmic Law. Or perhaps by featuring an enormous cast that was ridiculously well balanced, so that practically any character could believably defeat any other. Either way, I couldn't get into it.

Ten years later, The King of Fighters '98 Ultimate Match fell into my lap. In a curious reversal of Dreamcast fans' "THE PS2 HAS JAGGIES" mantra, this version's 3D backdrops are much cleaner. The arranged music -- there's even more of it now -- plays through an entire battle. Extra characters have been added while still retaining the super slick gameplay. And the introduction's kinetic style, with burning fists and catchy nerd rap, kicks butt in that nostalgic '90's arcade way.

Now it comes and here we go,
KOF is here again!
SNK Playmore's somewhat recent KOF '94 Re-Bout also had a cool introduction, but once the game actually started, the high-resolution characters stood out like sore thumbs against the primitive backgrounds. The sprites in Ultimate Match are lower resolution, but blend with the scenery so well that the whole game ends up looking better. I especially enjoyed watching debris and animals get sucked up into the celestial vortex that had opened above the traditional KOF arena... all while fighting the egomaniacal Goenitz, who wasn't even in Dream Match.

If you're not already familiar with KOF, if all the talk of Re-Bouts and Dream Matches and yearly episodes is overwhelming or confusing, then here's what you need to know: this game -- this Ultimate Match -- dispenses with all the storytelling, all the over-the-top blood rituals, all the annual additions to and subtractions from the cast. It's a single, solitary collection of mighty champions, diabolical villains, and magnificent bastards, duking it out in one-on-one or three-on-three matches. Personalities and rivalries are conveyed through the action without resorting to any fancy cutscenes.

It's funny. Brian Battler, US football champion (and vastly improved since his original KOF appearance), beats his chest and unleashes masculine bellows over and over... until glamour girl Shermie saunters over and slaps him in the face. Brian stops shouting, clearly ashamed. But when Shermie walks back to her side of the battlefield, Brian lets out one more bellow. Brian Battler always wins, because he's NUMBER ONE! RAHHHH!

Most importantly, it's a rush. Gripping the controller with white knuckles, blocking energy attacks after watching friend Joe and brother Andy get torn apart by the beastly Omega Rugal, praying that Terry Bogard's burning knuckle will pierce the demi-god's defense and wipe out that last sliver of vitality... SNK bosses have always been notoriously difficult, and this is no exception.

Some particularly notable pairings even feature super-secret music. The game never had a shortage of catchy, high-quality tunes, but hearing Blue Mary's standard melody replaced with a vocal track was pretty cool. It'd be easy to declare Ultimate Match a success based on the slick control, absurdly huge roster (many characters even have special variants -- play as regular wicked Iori, or as insanely bloodthirsty Orochi Iori), energetic visuals, and sweet dual soundtracks. And in case you don't want to play the updated version, the original NeoGeo ROM is included on the disc.

But the thing that truly makes Ultimate Match stand out is SNK Playmore's understanding of fighting game players.

The game creates a blend of styles not by mimicking actual martial arts, but by supplementing video gamers' natural tendencies. Some players crouch and block every attack, some aggressively leap towards their opponent, some try to get close and grapple, others play the role of Aikido master and counter opponents' strikes. Whatever method someone naturally leans toward, there are characters designed to match that style. When people talk about 1998's balance, that's what they mean. Instead of conforming to an esoteric combat system, success is based on finding a team that conforms to you.

This is definitely a well-timed release. For fans, it's a nice "remember why you love KOF?" before the visually incredible King of Fighters XII hits later this year, a memory of the days when these characters were fresh and Athena was still hot. For series newbies, it's a fantastic way to build familiarity with the cast. It's such a complete package that I feel like I don't need another KOF game (probably not what Ignition or SNK Playmore wants to read), but I know I'll purchase KOF XII anyway. And they've got The King of Fighters '98 Ultimate Match to thank for that.

If you enjoyed this The King of Fighters '98 Ultimate Match review, you're encouraged to discuss it with the author and with other members of the site's community. If you don't already have an HonestGamers account, you can sign up for one in a snap. Thank you for reading!

© 1998-2021 HonestGamers
None of the material contained within this site may be reproduced in any conceivable fashion without permission from the author(s) of said material. This site is not sponsored or endorsed by Nintendo, Sega, Sony, Microsoft, or any other such party. The King of Fighters '98 Ultimate Match is a registered trademark of its copyright holder. This site makes no claim to The King of Fighters '98 Ultimate Match, its characters, screenshots, artwork, music, or any intellectual property contained within. Opinions expressed on this site do not necessarily represent the opinion of site staff or sponsors. Staff and freelance reviews are typically written based on time spent with a retail review copy or review key for the game that is provided by its publisher.