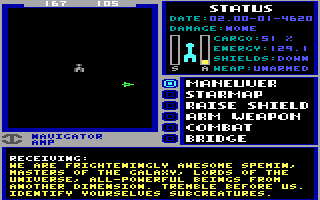 When Binary Systems' space exploration adventure Starflight hit store shelves in 1986, it boasted some impressive features. I could recruit and train my crew, selecting among five different species. I could explore planets and harvest minerals or capture wild beasts. I could communicate with alien races in friendly, hostile, or obsequious tones, or I could communicate with high-powered weaponry. Hundreds of solar systems housed a thousand planets. Starflight was the pioneer of sci-fi sandbox, pre-dating Star Quest and Star Control 2 . . . and it all fit on two 360K floppy disks.

My vague orders were to explore the universe and gather information. A warning accompanied those orders -- spaceport lost contact with two ships at coordinates 135,84. That sounded dangerous. Dangerous but exciting! I immediately set about training my crew and equipping my newly-christened ship (the I.S.S. TARDIS) with cargo pods. Lasers, missile launchers, and better engines would have to wait until I earned more money. As CAPTAIN ZIG, I ordered my ship's navigator to begin the launch sequence. Adventure awaits -- I'll explore new worlds! Capture non-sentients! Gather minerals! And keep from getting brutally killed!

I also decided that I would discover the lost planet: Earth.

Finding Earth proved difficult, but recommending other inhabitable planets for colonization proved lucrative. Of course, I had to be sensible. Even though Starflight doesn't show images of intergalactic buses imploding upon entering a 12G atmosphere, the hefty fines imply some severity for making stupid recommendations.

One evening, while harvesting minerals from a tropical planet, I stumbled across some ruins. Starflight's universe is not a young one; many others swam through the sea of stars before I even dipped my toes. Ancient artifacts lie within pyramids, waiting to be discovered; a notorious space pirate's trail leads to some surprising booty.

Other beings also thirst for knowledge. When alarms sound, it means aliens are approaching! Some will shoot first. Others wish to speak and share wisdom. And some just want to boast.

As much as I wanted to blast their insectoid spleens, I had to contain myself and speak of "our children someday playing together, calling one another brother". In Starflight, death is permanent. And the Veloxi had guns.

I bought some guns of my own. When the spineless Spemin -- a race of sentient blobs -- began kow-towing before my might, I knew I had become a powerful being. I demonstrated this by attacking their homeworld. It was easy to justify slaughtering the Spemin fleets; they're a thoroughly unlikable species of sycophants who stab others in the back.

It was tougher to justify conquering the Veloxi homeworld. They're braggarts, but they aren't evil. By then, my cruelty was beyond justification. I just wanted more Endurium fuel. After all, he who controls the fuel controls the universe! So I landed on the Veloxi homeworld and ransacked "the most magnificent hexagon", an area marked by a hexagonal assemblage of Endurium.

After obliterating a couple planets with rare black egg bombs, I felt invincible. But stars were flaring, annihilating entire solar systems. My empire's final days were approaching. I finally discovered the source of this peril, and I intended to stop them. After all, what is the point in conquest if there's no one left to rule?

Harvest minerals. Discover lost civilizations. Meet powerful alien races. Craft an uber-ship capable of fighting their fleets. Conquer lesser species' homeworlds. Abandon conquest to defend all that you've seized. Put all of this together and Starflight was a ridiculously ambitious project. Even today, few games have approached its planet-hopping scope. Grand Theft Auto IV provides a lot of freedom, but you're still bound by Nikolai's life -- his personality, his ambitions, his missions. Starflight was my story!

With the advent of the internet age and online gaming, when sandbox games became so common that the term "sandbox" was coined, Starflight could have faded from memory. But that's not what happened. Instead, I discovered others who had been touched by Binary Systems' classic. Comparing memories, we had all followed the same path -- from intrepid explorer, to studious anthropologist, to obsequious diplomat, to diabolical conqueror, and finally to universe's savior. I thought Starflight was my story -- but all along, it was our story.

If you enjoyed this Starflight review, you're encouraged to discuss it with the author and with other members of the site's community. If you don't already have an HonestGamers account, you can sign up for one in a snap. Thank you for reading!

© 1998-2021 HonestGamers
None of the material contained within this site may be reproduced in any conceivable fashion without permission from the author(s) of said material. This site is not sponsored or endorsed by Nintendo, Sega, Sony, Microsoft, or any other such party. Starflight is a registered trademark of its copyright holder. This site makes no claim to Starflight, its characters, screenshots, artwork, music, or any intellectual property contained within. Opinions expressed on this site do not necessarily represent the opinion of site staff or sponsors. Staff and freelance reviews are typically written based on time spent with a retail review copy or review key for the game that is provided by its publisher.