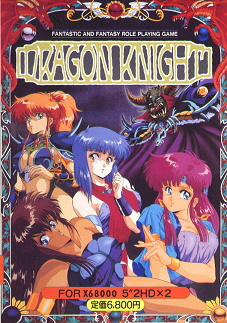 These are the luscious lands of Strawberry Fields. Lands that were protected by the warmth of the goddess Adriana. Lands upon which mothers watched their daughters play. Lands that were at peace. Lands that are now being crushed beneath the iron heels of the five Dragon Knights and their dark emperor.

The Dragon Knights have conquered the Goddess Tower and turned Strawberry Fields' benefactress to stone. Jadestone, to be precise. The Queen's strongest swordswomen have ventured into the tower to defeat the vicious violent knights, but none have returned. Those valiant vivacious women are now presumed dead... or worse, they may be naked.

Amidst this turmoil, a warrior from another land arrived. He was a man. A man with a golden knife. A man possessing a bare minimum of magical knowledge that he gleaned from some old hag.

Go forth, man! You alone can save the women of Strawberry Fields!

Discovered by an attractive young maiden named Lilia Luna, the man-from-another-land simply smiled. It was a kind but firm smile. The sort of smile that sets a girl's heart at ease, the sort of smile that tells a girl everything is going to be okay. Luna gazed into the warrior's eyes, entranced by the way the sun glistened upon his corneas. And then the warrior spoke.

"I am Takeru. You have nice breasts."

Japan is often credited with popularizing the RPG genre. However, it was a Western game that popularized the genre in Japan... a first-person dungeon crawler called Wizardry. Throughout the 80's and early 90's, dungeon crawler clones exploded across the orient. Many of these games have been lost to time, relegated to that pit of Hell reserved for cheap imitations, but a scant few still occupy a fond spot in gamers' hearts.

The odd thing is that, unlike Wizardry or Japan's own Arcus, Elf's classic only featured one playable character, one town, and one dungeon. Within the land of Strawberry Fields, when it's time to go adventuring, Takeru can visit the Goddess Tower, or he can visit... the Goddess Tower. And it's only six stories tall. I don't recall how many maps The Bard's Tale featured, but it was firmly within the double digits.

One could thus conclude that Dragon Knight was only popular because it had naked girls. That's not quite true; until the Tower's final two floors, most of the women actually wear clothing. They just don't wear very much of it. Attributing the game's popularity to pretty girls, drawn in the Rubenesque style that was popular in the 80's... now that's a bit closer to the truth. Luna -- the red-head who enlisted Takeru's aid -- was such a hit with the gaming public that she even earned the coveted cover spot on Elf's Christmas music CD, featuring their hentai heroines performing Jingle Bells, Silent Night, and other holiday classics.

Damn, I miss those days.

The more significant reason Dragon Knight was so popular -- and ultimately, so important -- is because it was one of the first hentai games that was actually good. If you don't believe me, then ask anyone whether they remember Quintia Road or Gunblaze. It's easy to shoehorn pretty women into a dull game, but it's much harder to build a quality product around the idea of a lecherous knight who rescues distressed damsels. Dragon Knight is extremely short and simplistic (Takeru can only cast two spells: "heal" and "harm") but, within those limited boundaries, the game showcases a ridiculous amount of variety, humor, and clever puzzles. And the music is really damn catchy.

Every level of Dragon Knight's dungeon is crammed full of unique monsters, pretty ladies, and bizarre trap concepts. On one level, you'll "rescue" a girl who's been transformed into the world's cutest orc... and she'll clue you in on the secret that will let you transform into a monster yourself. That's what you'll need to do to sneak your way into the Minotaur's torture chamber. On another level, you'll acquire the legendarily powerful White Sword, only to break it in half a few minutes later while fighting weird creatures that look like brains with legs and wings.

And every now and then, you'll bust in on a monster who's about to molest a pretty young girl.

The monster will look at you. The words "GO AWAY" will be written on its face, kind of like the time you walked in on your roommate having sex.

And then, after the troll, berserker, or whatever other monster happened to be tormenting the poor girl has been dispatched, the lovely lass will cover up and return home. Takeru may be lecherous, but he's not an ass. 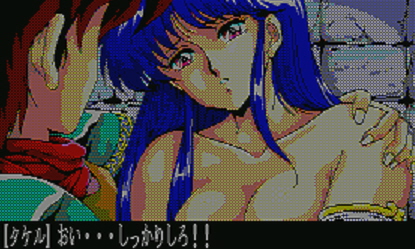 Even with only six maps, there's so much to discover that you can actually slay the Dragon Knights' emperor and beat the game, but still miss out on rescuing some of the better-hidden girls. I know this because I finished Dragon Knight on my high-powered X68000 Expert 10-meg RAM beast machine, but I somehow missed the ultra-cute green-haired girl (who, based on pictures floating around on the internet, actually is naked).

Unfortunately, before I could play the game again, my X68000 exploded. I don't mean "went on the fritz", I mean the thing EXPLODED. It was smoking out the back and everything. For any of you who plan to purchase an X68000 (a.k.a. the greatest gaming computer of all time), I suggest NOT leaving the power on overnight.

A couple years later, I played Dragon Knight again, this time via an emulator. The experience was exactly as I remembered: the bouncy music, the primitive but appealing graphics (replete with scan-lines), and the fast-paced gameplay. All of the little details I had forgotten -- like the giant bronze golem with the giant bronze penis -- came rushing back, warming the stone-cold cockles of my jaded gamer heart.

But then, at the beginning of the fifth level, the emulator crashed. I booted up another emulator. Then another. No matter what I tried, it was impossible to progress any further. To say I was upset would be an understatement; I had spent the better part of a day building experience and drawing maps to get to that point.

Dragon Knight is a great game. And even though the world has repeatedly tried to stop me, I'll play it again. After all, I'm the man! I alone can save the women of Strawberry Fields!

If you enjoyed this Dragon Knight review, you're encouraged to discuss it with the author and with other members of the site's community. If you don't already have an HonestGamers account, you can sign up for one in a snap. Thank you for reading!

© 1998-2021 HonestGamers
None of the material contained within this site may be reproduced in any conceivable fashion without permission from the author(s) of said material. This site is not sponsored or endorsed by Nintendo, Sega, Sony, Microsoft, or any other such party. Dragon Knight is a registered trademark of its copyright holder. This site makes no claim to Dragon Knight, its characters, screenshots, artwork, music, or any intellectual property contained within. Opinions expressed on this site do not necessarily represent the opinion of site staff or sponsors. Staff and freelance reviews are typically written based on time spent with a retail review copy or review key for the game that is provided by its publisher.