Breaking news: Golden Axe: Beast Rider doesn't have the cocky stylishness of Devil May Cry, the deep combat system of Ninja Gaiden, or the outlandishly epic trappings of God of War.

I doubt anyone is surprised; despite the developers' declarations of love for the original series, many gamers had Beast Rider pegged as "crap" before it even hit storeshelves, and the generic cover art didn't help. To Sega's credit, it's actually a competent and enjoyable adventure. Key word: adventure. This isn't a 3D Golden Axe. This is an adventure set in the Golden Axe world, similar in spirit to the Game Gear's Ax Battler, but this time, the star is Tyris Flare. I could slam this game for not being a brawler. I could slam it for not being two-player simultaneous, and I could slam it for not including a slew of selectable characters.

I could also slam Panzer Dragoon Saga for not being a shooter. 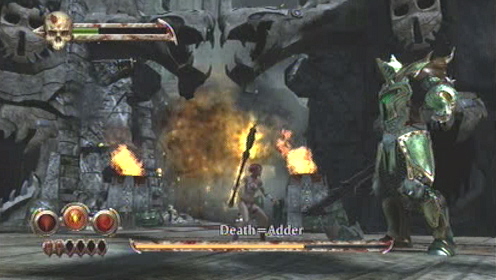 Empowered by legions of grubbers, skeletons, and dark knights, the iron-fisted Death=Adder has squeezed all hope from the land of Yuria. Only one group opposes him, but that won't last for long -- the very first chapter depicts the destruction of Tyris Flare's amazonian tribe and the abduction of their guardian deity. Tyris is the last survivor of her clan, and she vows to rescue the sacred dragon, last survivor of the legendary Titans.

It's a pretty flashy opening, but flashy openings have become a dime a dozen. To be honest, I was a bit frightened by the game's first few minutes. According to the instruction manual, I had to actually earn my magical abilities. Tyris had doffed her skimpy outfit and chopped her long hair in favor of becoming the "tough warrior chick who's too cool to act sexy". There was an in-game tutorial. I feared that Beast Rider was going to be a generic fantasy adventure feeding on fond Golden Axe memories.

Then the gnomes showed up.

I've never been so happy to see those damned little buggers. The familiar music, the familiar squeals, the familiar feeling of beating their indestructible behinds -- that's when I knew this really was Golden Axe. Gnomes pop up throughout the adventure, just like they did in the original game, delivering health and magical restoration potions after difficult encounters. As a cool and politically incorrect twist, Death=Adder eventually employs suicide bomber gnomes. They deliver death.

"BY MY BALLS, GIRL, I THOUGHT YOU WERE DEAD!"

Only the ultra-masculine dwarven warrior Gilius Thunderhead, with his true viking spirit (and super long beard), could deliver a line like that and not sound stupid. When I heard those ridiculous words, I tried to laugh, but he seriously sounded... cool.

That's one of the nice things about this game. Long-time fans of the franchise will notice that Golden Axe: Beast Rider incorporates a LOT of characters and backdrops from the original game, and none from any of the sequels or other incarnations. That's fine with me: Death=Adder always was a cooler villain than Dark Guld, and the final battle was well worth the time spent traveling through ugly landscapes. This is not the technical ugliness of "bland graphics" or "poor clipping", but the atmospheric ugliness that accompanies a diabolical despot's total conquest. Villages have been ransacked and ravaged; decomposing bodies lie strewn about the desert wastes; bitter knights prowl empty castle courtyards amidst the pouring rain. They've no one left to fight. No one but you. 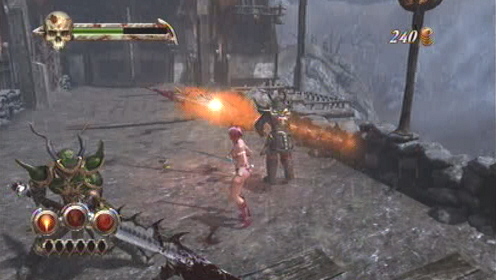 The dismal atmosphere separates Golden Axe from other fantasy games like Conan. Even though they're both fantasy adventures, Conan enjoyed the thrill of adventure and sought pleasure in a world full of life. Tyris is fighting to survive in a world on the brink of destruction. This is obvious just by looking at the naked women. In Conan, you rescue naked women from certain death. In Golden Axe, the naked women are already dead. They're not just dead -- they're lying in pools of blood, they're decapitated and dismembered, they're speared through their nether regions and hoisted up to rot in the baking sun.

That's one of the creepy things about this game. Dead female bodies keep popping up everywhere. Not male bodies. Yes, you chop your male enemies to pieces, but you don't find naked men lying dead on the ground. Just women. Lots of dead, topless women. And unlike other female gaming protagonists, Tyris doesn't die with dignity -- lose all your health and you'll see Tyris get decapitated, cleaved in twain, or ground into a bloody pile of flesh.

The game even goes so far as to hint that it will take a man to truly set things right in this world. I don't know if Sega is thumbing their nose at "hot female heroine" games like Heavenly Sword, or if Sega really just hates women.

Either way, Tyris is the only person seriously trying to stop Death=Adder. To this end, she uses her blade, her magic, and the world's many beasts. Melee combat is limited, but it's not shallow. Tyris doesn't learn new attacks, and she doesn't find new weapons. Hell, Tyris doesn't "level up" in any way whatsoever (aside from finding her magic spells, which actually happens very early in the adventure). This game goes back to the old school style: to become stronger, you have to get better. You have to practice and perfect your parries, counterstrikes, and positioning. It may sound simple, but beating the game -- knowing that Tyris was no stronger at the end than she was at the beginning, knowing that my success was all because of ME -- was a tremendously satisfying feeling. I'm not suggesting that every game should abandon character growth, but it was handled well here.

Although the melee combat flows smoothly, the beast combat is a bit clunkier. That's pretty easy to forgive, for a couple reasons: first, beast riding has always been tricky. Second, the beasts are pretty damned powerful, capable of mauling hellhounds in two blows instead of twenty. Whether spewing fire, rending foes with spiky claws, or spearing hapless opponents with a spiked tail (then pressing a different button to eat them like a shish-ka-bob), these creatures rip through enemies with frightening speed. As a nice little perk, players who take the time to master each beast and consecutively kill a bunch of Death=Adder's minions will earn additional achievement points as well as additional "tribute". That's right -- slaughter all who oppose you and the gods pay tribute to your exalted gaming talent. 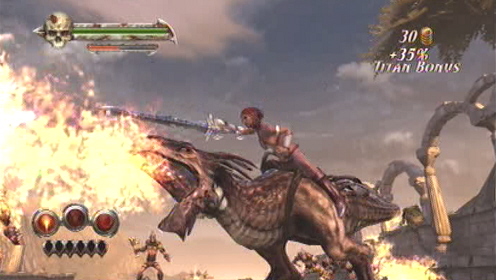 Even though Golden Axe doesn't reign supreme over its action-adventure brethren, and even though the scenery can be a bit creepy, it's obvious that the designers truly respect the Golden Axe name. It's all too common these days for developers to design their own world and just slap a familiar name on it, but that's not what happened here. It's especially nice to see the developers incorporate things that we all wanted to see in the original 16-bit adventures. When Tyris actually manages to assemble the Golden Axe, Sega does something very exciting that truly makes the legendary axe feel like the most powerful weapon in the world. Despite starting with the linear levels you'd expect from a generic third-person adventure, Golden Axe: Beast Rider eventually becomes a strong sword-and-sorcery tale.

...even if the abrupt ending is just an excuse for Gilius to say "BLOOD AND SHIT".

If you enjoyed this Golden Axe: Beast Rider review, you're encouraged to discuss it with the author and with other members of the site's community. If you don't already have an HonestGamers account, you can sign up for one in a snap. Thank you for reading!

© 1998-2021 HonestGamers
None of the material contained within this site may be reproduced in any conceivable fashion without permission from the author(s) of said material. This site is not sponsored or endorsed by Nintendo, Sega, Sony, Microsoft, or any other such party. Golden Axe: Beast Rider is a registered trademark of its copyright holder. This site makes no claim to Golden Axe: Beast Rider, its characters, screenshots, artwork, music, or any intellectual property contained within. Opinions expressed on this site do not necessarily represent the opinion of site staff or sponsors. Staff and freelance reviews are typically written based on time spent with a retail review copy or review key for the game that is provided by its publisher.