Video game companies have been milking Romance of the Three Kingdoms for over twenty years. Of these companies, Koei has been the most successful. They've been so successful that, although Japanese fans know better, I wouldn't blame Western gamers for thinking Koei invented the franchise.

Truth is, Romance of the Three Kingdoms was a serial work of historical fiction, penned by Luo Guanzhong back in the 14th century. It took actual figures from China's "warring kingdoms" period and creatively embellished their legendary personalities. Romance's larger-than-life approach to history was immensely popular across all of Asia, and inspired several artists to adapt the story into manga form. It also inspired countless Japanese authors to pen similar novels about their own homeland's "warring states" period. Both Romance and the samurai epic -- stories with different settings but similar characters -- remain enormously popular in Japan.

However, even though such novels are barely known in the West, Koei has insidiously laid the groundwork for American pop culture conquest! Every year, manly brawler fans can count on a new episode in the Dynasty Warriors or Samurai Warriors series -- games that capture the sweeping battles, political intrigue, and fan service cameos of their literary inspiration. Even though the series began as a simple one-on-one Playstation fighter, most notable for the scene of one guy eating his own eyeball, it quickly ballooned into a chaotic blend of "one man against hundreds" third-person action and experience-driven level grinding. Players select one warrior from an assortment of dozens, and then slice through officers with fancy names (and throngs of their nameless underlings), while assisting allies who are visible on the playfield... allies fighting their own desperate battles. It's exciting and, in its own subtle way, educational. Although highly exaggerated, the events depicted onscreen could have actually happened.

In no version of our world could Warriors Orochi have actually happened.

Quite simply, Warriors Orochi is a Japanese boy's craziest fantasy come true. It combines the greatest Chinese heroes from Romance, the strongest Japanese warriors from historical samurai epics, and mashes them all together in a battle against SERPENT WARRIORS FROM SPACE. Basically, the demon god Orochi has warped time and reality, plunging heaps of Chinese and Japanese soldiers into one messed-up world. 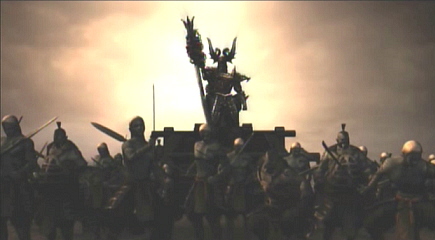 Fans of Rurouni Kenshin or Path of the Assassin will recognize more than a few characters -- Hattori Hanzou is just as bad-ass a ninja as one would expect, and Gan Ning clearly inspired the rugged Sanosuke. Every other American will wonder, "What in the unholy hell is going on?" For that reason, if you're interested in learning about the historical drama behind Romance of the Three Kingdoms, this is NOT the proper game to purchase. For that, you'd best pick up the excellent Dynasty Warriors 5, which features an entertaining story mode for every character.

On the other hand, if you're just interested in brutal, fast-paced action, Orochi should do just fine. Seeing as it features every legend from Koei's two flagship series, plus a few new characters above and beyond, there's no shortage of heroic grandstanding, villainous treachery, and screen-wiping carnage. A special treat for existing Dynasty Warriors fans: Koei has finally conquered the "enemies popping up out of thin air" graphical glitch. This update of a PS2 game isn't as visually impressive as Ninety-Nine Nights but, at long last, enemies can actually be seen in the distance. Watching one skirmish in the background, while you fight another in the foreground, significantly enhances the feeling of actual battle.

Although many have chastised Koei's brawlers for their pop-up, the most common complaint leveled against the Warrior games is that they're too repetitive. For the most part, you control one character who runs around a map, repeatedly pressing buttons to kill hundreds of enemies. Win one mission, start the next, kill hundreds more. Although true, "repetitive" is a careless complaint that could be said of almost any RPG, first-person shooter, or third-person action game. I believe the real issue is that naysayers don't find Koei's games to be rewarding.

That's one thing I like about this particular episode -- the combat never feels useless. If you die during a mission, you get to keep whatever experience you earned. If you fight and win, then you earn new weapons and abilities. If you acquire a weapon you already own, you can melt it down to improve your existing weapon. The abilities -- things like improving defense or horseback riding -- carry over from one character to another. If you're having trouble on a high-level mission with one hero, then you can play as a different warrior, earn some new abilities during easy missions, and then return to the first character with extra power under your belt. I've clocked in over 40 hours and have yet to feel like I wasted my time; there's always something to be gained.

Of course, some would say killing dozens of enemies with Ginchiyo Tachibana's electric aura is reward enough. 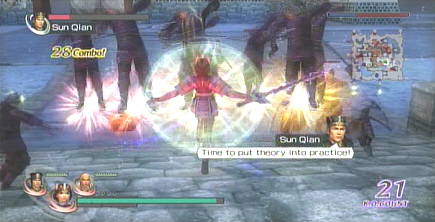 If you get tired of Miss Tachibana, you can switch to another character at any time; as in King of Fighters, you control a team of three. Unlike King of Fighters, the demonic Orochi will not be defeated by streetwise schoolchildren. Since each character has his or her own distinct fighting style -- Meng Huo flattens foes with his massive body, Hideyoshi Toyotomi can chain a series of twelve spins together -- the ability to swap heroes adds variety to the combat. It's also a necessity during tough battles, so that "sidelined" characters can heal. Unless you're playing as Guan Ping or Nobunaga Oda. They're absurdly powerful. Character balance is not this game's strong point. Then again, I don't expect perfect balance in a game with over 70 legendary warriors -- some people should be tougher than others. Nobunaga wasn't called a "demon general" for nothing.

Warriors Orochi will obviously have less meaning to (most) Western gamers than it does to Japanese players. The Warriors titles have sold millions upon millions upon MILLIONS in Japan because people love to play as their kick-butt childhood heroes. That's why -- even though I love the game -- it's hard for me to recommend Orochi when I know other manly brawlers do a better job of establishing their characters without relying on prior knowledge. However! If you're the kind of person who doesn't mind a silly story about ancient warriors facing off against celestial serpent gods -- if you're the kind of person who prioritizes fun gameplay above engaging storyline and don't mind watching one of the most inappropriately sappy endings in gaming history -- then Warriors Orochi delivers where it matters.

If you enjoyed this Warriors Orochi review, you're encouraged to discuss it with the author and with other members of the site's community. If you don't already have an HonestGamers account, you can sign up for one in a snap. Thank you for reading!

© 1998-2021 HonestGamers
None of the material contained within this site may be reproduced in any conceivable fashion without permission from the author(s) of said material. This site is not sponsored or endorsed by Nintendo, Sega, Sony, Microsoft, or any other such party. Warriors Orochi is a registered trademark of its copyright holder. This site makes no claim to Warriors Orochi, its characters, screenshots, artwork, music, or any intellectual property contained within. Opinions expressed on this site do not necessarily represent the opinion of site staff or sponsors. Staff and freelance reviews are typically written based on time spent with a retail review copy or review key for the game that is provided by its publisher.