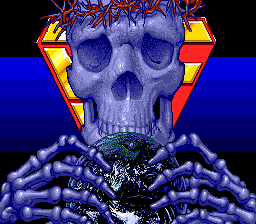 20TH NOVEMBER 1988
A special ops team infiltrated the jungles of South America to take out a terrorist army. The team had been promised assistance by the local government of "Lloyd"... only to be cruelly betrayed! As depicted in a gruesome cinematic slaughter, only one man survived the massacre...

20TH NOVEMBER 1989
One year later, the world has fallen into corruption and despair. Arms dealers, terrorists, and even famous financiers are all connected by an intricate web with a criminal syndicate at its center. Playing the role of reaper, this syndicate -- a fearsome foursome known as the "Force Project" -- holds the world in its skeletal grip. To deal with this diabolical menace, the CIA needs someone tough. Someone strong. Someone like...

22ND DECEMBER 1989
A lonely man, living day-by-day on the line between life and death, met with an old friend. A tinge of sadness colored his voice.

"I thought we'd always do things together... even when we die!"

James did not respond, because he was dead. Guy Kazama kneeled before his dear friend's grave, a mixture of sorrow and anger welling up within his embattled soul. The wicked Lloyd government must pay for their hellish deeds!

Enter Harvey Leonard, director of the CIA and Guy's mentor... and a man who speaks in near-falsetto. He reveals to our vengeful hero that the Lloyd government was operating under direction of the Force Project -- Colonel Kadat of Libya is the true mastermind of his friend's tragic demise! Harvey assigns Guy an important mission: assassinate Colonel Kadat!

Guy Kazama is quick to accept.

As you may have already guessed, Last Alert places you in the boots of "one man army" Guy Kazama, as he embarks on the Turbo CD equivalent of Stallone's entire action movie library smashed together into a single disc. Upon first glance, this appears to be a bloodier, fancier version of Ikari Warriors -- replete with sweet CD soundtrack. However! As the game progresses, several of the multi-segmented missions demand either a special objective (such as rescuing POWs) or place unusual obstacles in your path (such as bamboo stake traps). These frequent additions give the game more variety than similar run 'n guns of the era.

The developers' effort is especially impressive considering the amount of variety already inherent in the game's scope. First, you'll hunt down the aforementioned Libyan terrorist leader, a stinking louse who dares call himself a Colonel. This task is an epic in and of itself, which involves foiling diabolical plots (by destroying a terrorist stealth bomber fleet or rescuing the US President) and then taking down the Colonel's own hierarchy of henchmen. As you eliminate soldiers, jeeps, and grenadiers, you'll gain valuable experience. This increases your military rank eighteen times over, from RANGER to TANK BUSTER to FULL ARMOR GUY, and higher ranks also let you wield more powerful weapons such as the superheroic four-way rocket launcher.

But that's just the beginning; Colonel Kadat is only one member of the Force Project! After successfully assassinating the terrorist leader, a Chinese kingpin is quickly informed of the Colonel's death.

"Guy Kazama intends to enter the martial arts tournament you hold every year to kill you, Mister Lee."

Yes -- whereas other games would end with saving the President, that's how this epic begins. After thwarting terrorist plots and wiping out 90% of Libya, Guy has to fight his way through a gauntlet of cybernetically enhanced Chinese kung fu fighters! Somehow, it doesn't seem fair to slaughter karate masters with an assault rifle or grenade launcher, but that's how a badass like "MAD THUNDER" Kazama operates. He's out to win, not to be polite... and he won't take any lip.

Amusingly enough, Mister Lee happens to speak with an offensively bad Chinese accent. It's the kind of thing you'd hear on South Park, but back in 1989, the designers of Last Alert probably thought it actually sounded authentic.

"Ret me be your oh-ponent naow!"

Although several of the twenty bosses just run around the screen and shoot, most of them are quite a bit more interesting, as well as more technically demanding. Mister Lee flings trios of steel claws (reminiscent of Enter the Dragon), which then turn inwards to pin Guy in place. During a swamp battle, in which the water is already slowing Guy down, a scuba diver submerges and reappears at random locations on the screen. These battles require a lot of turning and shooting; fortunately, Guy has the ability to strafe or use special weapons (such as flamethrowers), which makes even the more demanding encounters less frustrating.


Last Alert really does play out like a series of cheesy action films. Guy Kazama slaughters evil martial artists, he invades island prisons, and he dons his finest GQ tux and wreaks havoc on a luxury cruiseliner. The game just keeps going and going, and it just keeps getting better. At one point, an evil scientist flees his laboratory to an adjacent hangar. Just as Guy arrives, the scientist escapes via SPACE SHUTTLE. Fortunately, there just so happens to be a second space shuttle parked nearby... so Guy hops inside and flies off after the scientist into outer space!

Whether leaping into stealth bombers as they're rolling down the runway, or blowing up chickens and pigs in random Asian villages, these interactive moments -- as well as neat visual details (like snowmen dotting the wintry tundra) -- lend the game a unique charm that its more straightforward peers did not possess.

Along with the fast-paced action and impressive variety, there's a lot of hilariously bad voicework. The quality of the acting is so HORRIBLE that every line is worth a laugh -- since the game only utilizes three voice actors, they keep putting on these ridiculous fake accents. I swear, one soldier sounds like Kermit the Frog. The script is also pretty stilted, although it does make Guy come across as a genuine (if goofy) badass.

Duke Nukem clone: "The president is an important guest of ours. I can't let him go."
Guy (with guttural growl): "That makes me want to get him back even more!"

Scuba warrior: "Dis river's gonna turn red with your blood!"
Guy Kazama: "How interesting. But it's going to be YOUR blood, not mine!"

Chopper Pilot: "Hey, Guy! Let my baby Betty throw you a kiss!"
Guy Kazama: "You're some weirdo, naming your helicopter!"

Colonel Kadat: "How dare you kill these precious men that I have trained?"
Guy Kazama: "Well, Colonel, you haven't done a very good job of training them."

That's just a sample -- there's a plethora of dialogue, because every boss speaks to you before (and occasionally after) a battle. Amazingly enough -- even though each line's delivery is laughably bad -- it manages to remain tolerable. If Last Alert's dialogue had been performed with Shakespearean care, the end result would be a cool game with an amusing action-film plot. However, the voice-overs were performed with no care whatsoever, making the game's genuine charms feel even more surprising and refreshing. It's like the mole on a supermodel's face; a case of imperfection making the beauty around it so much more apparent. This is not just another forgettable action game: this is kitsch classic Last Alert.

If you enjoyed this Last Alert review, you're encouraged to discuss it with the author and with other members of the site's community. If you don't already have an HonestGamers account, you can sign up for one in a snap. Thank you for reading!

© 1998-2021 HonestGamers
None of the material contained within this site may be reproduced in any conceivable fashion without permission from the author(s) of said material. This site is not sponsored or endorsed by Nintendo, Sega, Sony, Microsoft, or any other such party. Last Alert is a registered trademark of its copyright holder. This site makes no claim to Last Alert, its characters, screenshots, artwork, music, or any intellectual property contained within. Opinions expressed on this site do not necessarily represent the opinion of site staff or sponsors. Staff and freelance reviews are typically written based on time spent with a retail review copy or review key for the game that is provided by its publisher.