You are AMURU, paladin of justice and light. Your companions are the evil archeress RIA, wily thief URUTO WARREN, peaceful cleric DO GA, high wizard ASURA FROST, and the mighty LANCE. The epic tale of how six unrelated, oppositely-aligned characters came together is a tale lost to time, but NEC will be damned if they don't give us some laughable tripe to take its place!

(Even though characters' mouths move, the actual cinematic has no voice or text, so I filled in the gaps myself.) 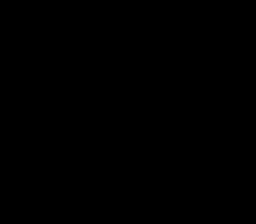 (Black loading screen. A common sight.)
So begins the Japan-ified version of American RPG classic Might and Magic, a neutered PC Engine port that completely removes the ability to customize your characters. No name creation, no class modification, and no race selection -- I hope you like humans, because that's all you're going to get! Such a blatant downgrade might, might, have been acceptable had stirring story sequences been spliced into the game to create some form of empathy or connection to NEC's pre-conceived protagonists but, aside from the cinematic introduction depicted above, the game is bereft of any such drama.

Oddly enough, even though the character creation was removed -- leaving you to control pre-set characters with pre-set classes and pre-set alignments -- the equipment and spell lists were left untouched. For example, the LIGHTNING BOW can only be used by a good-aligned archer. But your archer is not good. She's evil. And in this version of the game, alignments can't be changed... so the once-mighty LIGHTNING BOW is now useless.

That's a pity, because that bow would have come in handy when your small party, while slogging through the northern swamps, accidentally stumbled across a group of fourteen fire ants, orc raiders, and wererabbits. 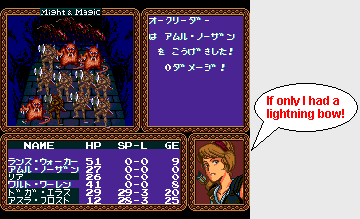 Misguided though its approach may be, NEC's port still hasn't spoiled the imagination that went into the game's expansive world. Damsels in distress stand chained to walls in volcanic lairs, awaiting the kiss that will free them from their bonds (and subsequently incur the wrath of a fiery god). Pirates' treasures lie buried in hidden coves, a reward for clever players who master the spell of levitation. Treacherous warlords, depicted via smirking portraits, send your unsuspecting party on errands in the service of evil. Ethereal voices assign you quests to slay enormous red dragons.

Yes -- earlier in the game, a generic centaur single-handedly wrecked your boat and laid you out. Now you're supposed to put a friggin' fire-breathing dragon to the sword.

Silly as that scenario may sound, I won't fault the game for giving players the freedom to perform the presumably impossible. Before Grand Theft Auto 3 popularized the word "sandbox", Might and Magic delivered the concept: a wide-open world, ripe for exploration and conquest. There is a main storyline -- you're pursuing the evil bastard who wrecked your precious boat -- but there are so many optional quests along the way that it's easy to forget the game is ever supposed to end.

* Will you free all the prisoners from the palaces scattered across the land?

* Will you release TOWN OF PORTSMITH from its curse?

* Where in the world might the mysterious alien be hiding?

Might and Magic is an easy game to recommend, but not in this particular format. NEC clearly wanted to expand on the game's main storyline, they clearly wanted to infuse the epic gameplay with a presentation to match, but -- either through lack of time or lack of competence -- the opening and ending cinematics come across as laughable bookends rather than meaningful additions. Aside from the lavishly-colored graphics (a clear improvement over the original), the PC Engine version of Might and Magic doesn't offer anything above and beyond other ports. The music is disappointing, the loading times are tiresome, and the lack of any character customization -- a feature present in every other version of the game -- is mind-boggling.

Dammit, NEC! I don't want to be a human paladin named AMURU! I want to be an elven sorcerer named...

If you enjoyed this Might and Magic review, you're encouraged to discuss it with the author and with other members of the site's community. If you don't already have an HonestGamers account, you can sign up for one in a snap. Thank you for reading!

© 1998-2021 HonestGamers
None of the material contained within this site may be reproduced in any conceivable fashion without permission from the author(s) of said material. This site is not sponsored or endorsed by Nintendo, Sega, Sony, Microsoft, or any other such party. Might and Magic is a registered trademark of its copyright holder. This site makes no claim to Might and Magic, its characters, screenshots, artwork, music, or any intellectual property contained within. Opinions expressed on this site do not necessarily represent the opinion of site staff or sponsors. Staff and freelance reviews are typically written based on time spent with a retail review copy or review key for the game that is provided by its publisher.