Simply based on the title, you might expect this game to be a bad ripoff of the legendary text adventure Leather Goddesses of Phobos. Or you might be whipping out the Vaseline and old gym socks. But oh man, either way would you ever be WRONG! Unlike the pile of bad adventure games that are merely forgettable, Sex Vixens From Space actually manages to be noteworthy thanks to reverse achievement. Whether pretty graphics, raunchy humor or rugged sex appeal, theres no start to its good points. 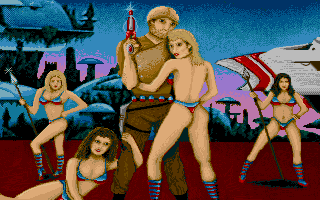 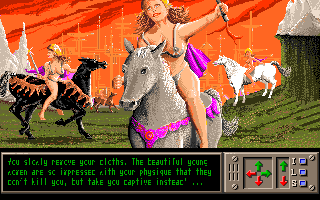 We join our hero BRAD STALLION, outrageously manly space guy, as he sets out to defend the universe from a legion of outrageously horny amazons, even if the title screen does make him look more like some sort of intergalactic Davy Crockett. Unfortunately for this spacefaring studmuffin, the writing is pure drivel consisting of the same pathetic, transparent attempts at humor repeated over and over again. The developers apparently thought it would be the height of wit to have every single character make the same remark about our heros Big Thruster, his starship shaped like a giant penis. This is what is known as a double entendre or play on words in reference to his genitalia, which is presumably also shaped like a giant penis.

Now the earlier Commodore 64 version was a crappy text adventure, but for this bigger, badder Amiga port Free Spirit decided to go ahead and torture us with graphics. Unfortunately they couldnt seem to decide whether to go with a text parser or make you point and click on tiny objects, so youll just have to randomly use both. Since theres no look command to highlight the items of importance, youll be hard pressed to even notice those tiny objects, and taking one doesnt even make it disappear from the screen. 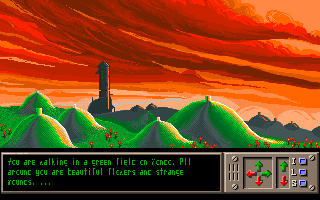 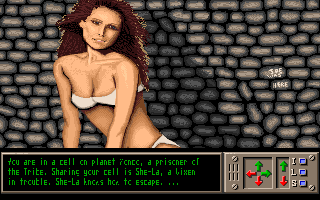 Of course these pixel hunts are still a hell of a lot easier than the alternative, as the text parser only accepts the one EXACT phrase it was programmed for and nothing else. Youd think it would have raised a red flag when saving the galaxy from certain destruction has nothing on trying to acquire a little maid service.

>GET MAID
Sorry, I dont understand.

>PUNCH MAID IN THE FUCKING MOUTH
Try some different words.

For those of you playing at home, the correct answer was SEND MAID.
>WTF

Not only is most of your time spent trying to figure out what youre expected to type or scouring the screen for a dot, but the puzzles are either blatantly obvious or dont make any sense. But the final slap in the face are those newly introduced graphics, which look like they were drawn by a 10 year old and are about as sexy as an enema  and knowing some of you people, let me make it clear that I mean that as a bad thing. Ranging from butt ugly to downright grotesque, its no wonder these so-called sex vixens have to forcibly rape the galaxy just to get some. Now we know why Brad is considered the bravest man in the universe.

If you enjoyed this Sex Vixens from Space review, you're encouraged to discuss it with the author and with other members of the site's community. If you don't already have an HonestGamers account, you can sign up for one in a snap. Thank you for reading!

© 1998-2021 HonestGamers
None of the material contained within this site may be reproduced in any conceivable fashion without permission from the author(s) of said material. This site is not sponsored or endorsed by Nintendo, Sega, Sony, Microsoft, or any other such party. Sex Vixens from Space is a registered trademark of its copyright holder. This site makes no claim to Sex Vixens from Space, its characters, screenshots, artwork, music, or any intellectual property contained within. Opinions expressed on this site do not necessarily represent the opinion of site staff or sponsors. Staff and freelance reviews are typically written based on time spent with a retail review copy or review key for the game that is provided by its publisher.