3DS | PC | PS4 | PS5 | SWITCH | VITA | XB1 | XSX | All
LUST IN SPACE
Ah, November: a time when all the madness and horror of Halloween quickly give way to the even more terrifying onslaught that is the holiday shopping season. It also means that Thanksgiving is fast approaching here at HonestGamers, so what better way to celebrate our glorious American way of life than with a big fat turkey? Thats right, its time for another torturous "adventure" with spacefaring studmuffin BRAD STALLION, a man who really knows how to stuff his birds, on a quest to pry lovely PRINCESS ORGASMA from the lecherous grip of (sigh) DOCTOR DILDO.

Now for those of you who recall the good captains previous outing, the thought of snatching a "lovely" princess probably dredges up barely suppressed nightmares of the LURKING HORRORS. But after the eye-melting monstrosities of SEX VIXENS FROM SPACE, Free Spirit apparently decided to hire an actual artist for this subsequent attempt to create an actual game. Unfortunately they must have been so busy wanking over the new graphics that they forgot to include those niggling little details like "puzzles," "plot," and "point." 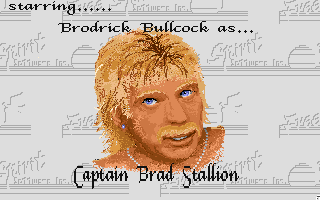 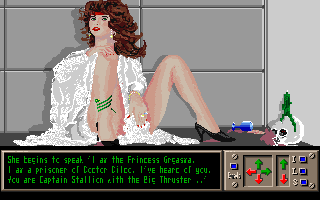 I mean its great and all that Brads new main squeeze is now identifiable as a human female rather than some sort of shaggy-maned intergalactic hobgoblin, but despite the bevy of buxom beauties lolling about on the cover shes also the only ladytype in the entire game. Of course, in this case the "entire game" literally lasts all of five whole minutes. The only reason that the wretched text parser wont annoy your oh-so-tight pants off is that there arent any puzzles to solve  you nab the holy apple of randyness while stumbling through a series of jungle screens, ravish what must be the princess identical twin sister in order to obtain her mystical water of burning lust, then return to your phallic starcruiser BIG THRUSTER and blast off to the lair of the dreaded doctor, where you foil his diabolical plans for world domination by clicking on him.

"With a single blow of your manly fist you knock the villain unconscious."

Seeing as how this punishing gauntlet of danger could be overcome by a blindfolded howler monkey (and not one of those super-intelligent space varieties), the developers made sure to toss in a number of arbitrary deaths for good measure. The jungle where you start off is (naturally) a maze, and when you reach the cavern of burning lust youll notice its in the shape of a rather fertile woman; click anywhere on the mountain and youll find yourself instantly crushed by a dislodged boulder along with a helpful message to indicate that "YOU DIE!" After locating the mystical springs of eternal passion, you absolutely need to take the exit up ahead; attempting to go back the way you came will result in our hero becoming hopelessly lost  thats right, YOU DIE! Didnt buckle your seatbelt before taking off in Big Thruster? DEATH. Theres even an alternate way to reach Doctor Dildo that apparently makes the game unwinnable, forcing you to start over again. Oh man, thats like 240 seconds of progress lost!

And your reward for heroically persevering through this grueling five minute marathon? A closeup of Brads bronzed, buff body as he reclines by a pool in the nude. I am not making this up. Of course getting to that point means you would have already waded through some of the most insipid prose ever, so fortunately by then your brain will have already shut down from gems like this one:

"She quickly undress you and seizes you in a passionate embrace. You fall to the floor and roll like animals locked in lust." 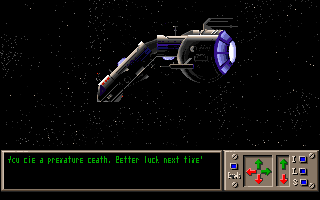 Maybe its not quite as bad as the first game  mostly because there are only 2.5 other sentient beings to interact with  but the script basically consists of "steamy" pillow talk written by a horny 14 year old coupled with the hilarious coincidence that Brads "Big Thruster" is shaped like a hulking durasteel dong and goes flaccid whenever he dies (ahem) prematurely. Still, I have to extend a sort of grudging respect to Free Spirit for shaking their fist at the heavens and defiantly ploughing on with a series that somehow continues to get worse before finally ending with the penultimate SEX OLYMPICS; when confronted with such a fathomless void of talent, I can only waver between laughter and a profound sense of pity. But dont take my word for it; this year, get into the Thanksgiving spirit of visiting people you actually cant stand by taking a trip down to the PLANET OF LUST (population: one.) Youll be sorry you did.

If you enjoyed this Planet of Lust review, you're encouraged to discuss it with the author and with other members of the site's community. If you don't already have an HonestGamers account, you can sign up for one in a snap. Thank you for reading!

© 1998-2021 HonestGamers
None of the material contained within this site may be reproduced in any conceivable fashion without permission from the author(s) of said material. This site is not sponsored or endorsed by Nintendo, Sega, Sony, Microsoft, or any other such party. Planet of Lust is a registered trademark of its copyright holder. This site makes no claim to Planet of Lust, its characters, screenshots, artwork, music, or any intellectual property contained within. Opinions expressed on this site do not necessarily represent the opinion of site staff or sponsors. Staff and freelance reviews are typically written based on time spent with a retail review copy or review key for the game that is provided by its publisher.