Capcom's not afraid to take chances. They keep things fresh, and I respect that.

If you're wondering why I'd say such nice things about the company that churned out five versions of Street Fighter II and shut down Clover Studio, here's the reason: for every Resident Evil, there's a Chaos Legion, a Tech Romancer, and a Killer 7. Even though their back catalog is littered with one-shot commercial failures, Capcom keeps trying, they keep clawing and scratching, until they hit upon the Next Big Thing: a game that will father a new franchise and inspire all the "me-too" manufacturers. I think they've actually pulled it off. I think Capcom tapped into the 360's potential earlier than anyone ever expected.

...but I'm guessing you're here to read nitty-gritty details, not an ode to Capcom. Fair enough! The basic idea behind Lost Planet is that you're a guy trapped on a desolate world trying to avenge his dead father. Along the way, you'll kill a bunch of monsters and collect the "Thermal Energy" they leave behind, which keeps you warm in the bitter winter cold. This energy depletes over time, even while indoors, so you need to collect as much as possible. If it ever runs out, you'll freeze to death... even if you're crossing rivers of molten lava. 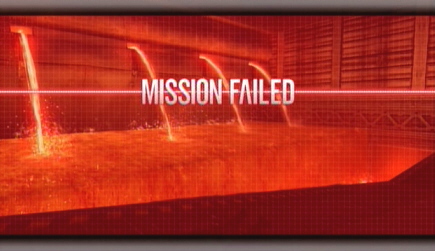 If you've perused our screenshot gallery, you may have noticed several images of an abandoned, frozen-over city. Telephone poles and power lines teeter precariously, battered down by pounds of snow and ice. Windows reflect the wintry desolation with astonishing clarity. It's an arresting cityscape, which is probably why Capcom released those pictures first. They wanted to make jaws drop.

The good news is that there are more such areas within the game, such as a volcanic pool ringed by broken-down cars, vehicles perhaps abandoned by hapless civilians fleeing from an unexpected eruption beneath the city's surface. Such environments are not only striking, but engaging; nooks and crannies provide plenty of hiding places for a quick weapon reload, and multiple ledges offer Lost Planet's bionic commando -- Wayne -- plenty of opportunities to use his fantastic grappling arm to zip from one sniping point to the next. Unfortunately, the actual sniping is poorly implemented due to a terrible zoom function (proving the Japanese still have a thing or two to learn from the West). Fans of strategy in their third-person shooters may want to track down Gears of War or Bullet Witch instead.

Likewise, people expecting a believable atmosphere will likely be disappointed by Lost Planet's internal incongruence; Wayne freezes to death while exploring volcanoes, huge chunks of explosive debris harmlessly pass through his body, and if Wayne knocks down any of his photo-realistic opponents, they're invincible until they stand back up. I don't expect video games to perfectly imitate life, but when a game puts forth so much effort into looking authentic, quirks that make it feel artificial are both irritating and distracting.

In short, forget strategy and immersion. With its cannon-fodder enemies and straightforward level design, Lost Planet is clearly aimed at gamers looking for some hearty old-school arcade shooting. At first glance, the game appears to deliver the non-stop action (if not charm) that you'd expect from a 3D Metal Slug. Cutscenes are easily skipped, there are no goofy puzzles, and exploration is both minimal and optional. Wayne simply runs through each level gunning down infinite squishy aliens, head-shotting corrupt soldiers, and commandeering a variety of custom-made mobile suits. When facing a particularly large slatherer, Wayne can even launch a hook into its skin, latch onto the beast's belly, and pump it full of lead.

The beast unfortunately shakes Wayne off its belly so quickly that there's barely time to do any pumping. Yeah, at first glance the game appears to deliver the non-stop action of a Metal Slug, but appearances can be deceiving. Just when you're getting into the run-and-gun groove, Lost Planet slaps you in the face with some annoying quirk that slows everything down. Frequent clouds of smoke and soot completely block your vision. If a hot pink laser beam catches Wayne in the chest, he'll fall to the ground... and a few uneventful seconds pass before he finally rises to his feet. By that time, the mechanical sentry with the hot pink projectiles may have already reloaded and fired a second blast, knocking Wayne down again.

Basically, Lost Planet is an action game that keeps interrupting the action. Capcom failed to fully conceptualize their project, and the final product comes across as a mish-mash of ideas that don't completely gel.

On the other hand, the bosses are pretty slick. I'll spare you a thousand words: Tell me that's not cool! However, that's not actually a boss. That's just a random creature that pops up during the third level... and you're expected to run, not fight. The Giant Worm could have been an awesome optional battle, but it has an annoying tendency to eat Wayne whole, killing him instantly (even on the lower difficulties). Near-death is exhilarating; instant death is not.

That's kind of how the whole game works. Players are rewarded for discovering a hidden weapon or secret route... not for honing their fighting skills. The second level's mobile suit boss seemed tough until I ran for the hills and stumbled across a buried shotgun that waxed it handily. A harrowing and genuinely exciting firefight in an underground city, with armored mechs bombarding me from all sides, became much easier once I realized I could simply climb inside a nearby mobile suit and fly all the way to the boss at level's end without actually fighting anyone.

The game hands you powerful weapons and pits you against interesting enemies. The game gets you in the mood to FIGHT. And then it rewards you for running away like a frightened puppy. That kind of defeats the purpose behind a run-and-gun shooter. Capcom has deceived us!

Although the game itself is disappointing, Lost Planet's story is downright terrible. The CG sequences are high-quality -- Capcom actually modeled Wayne after some famous Korean actor -- but they're dull and nonsensical. For at least a few minutes, Wayne accused this moron of being the killer. Does that twin-pigtailed countenance inspire a stylish sense of dread? It's supposed to... but it just made me laugh in that "how could it all go so tragically wrong" kind of way. Even Nanobreaker had better cutscenes: energetic confrontations between hero and villain that made you want to keep playing just to see what would happen next. And Nanobreaker SUCKED.

Lost Planet's story is like a crazy mystery movie where the detective accuses everyone of being the killer because he has no idea who the killer really is. After a while, I stopped caring. I fought bosses as a rote matter of course, which was kind of disheartening. The climactic final battle would have been amazing if there were any actual emotional investment.

On the plus side, Wayne's bionic arm never starts talking.

Although far from terrible, Lost Planet's not "arcadey" enough to satisfy my lust for action, and not "deep" enough to immerse me in the experience. There are already 360 games with faster action and more engrossing atmosphere. Still, I'm glad to see Capcom trying out new ideas. Even though their back catalog is littered with one-shot commercial failures, Capcom keeps trying, they keep clawing and scratching, until they hit upon the Next Big Thing: a game that will father a new franchise and inspire all the "me-too" manufacturers. I think they've actually pulled it off.

If you enjoyed this Lost Planet: Extreme Condition review, you're encouraged to discuss it with the author and with other members of the site's community. If you don't already have an HonestGamers account, you can sign up for one in a snap. Thank you for reading!

© 1998-2021 HonestGamers
None of the material contained within this site may be reproduced in any conceivable fashion without permission from the author(s) of said material. This site is not sponsored or endorsed by Nintendo, Sega, Sony, Microsoft, or any other such party. Lost Planet: Extreme Condition is a registered trademark of its copyright holder. This site makes no claim to Lost Planet: Extreme Condition, its characters, screenshots, artwork, music, or any intellectual property contained within. Opinions expressed on this site do not necessarily represent the opinion of site staff or sponsors. Staff and freelance reviews are typically written based on time spent with a retail review copy or review key for the game that is provided by its publisher.