Dead or Alive Xtreme 2 is absurd.

The game takes nine beautiful but violent girls, several of whom have tried to assassinate each other in the past, and drops them onto an island paradise where they give each other gifts like Chinese tea sets and prototype Xboxes. There is absolutely no reason that Hitomi and Lei Fang -- last seen toppling fruit stands in Dead or Alive 4's outdoor marketplace -- should share a single soft-serve ice cream cone... but there they are, on my TV screen, sitting side-by-side on a wooden bench. One licks, the other licks, and then they grin like young yuri lovers. Even ignoring the skimpy swimsuits and lurid gravure scenes, this game is a mockery of Dead or Alive's fragile integrity.

To some people, this tropical adventure might feel like a natural extension of the original concept. Cynics might say that Dead or Alive was always about the exploitation of big-breasted women. Nonsense! Perhaps the naysayers are pencil-neck geeks driven by a sick and twisted desire to feel superior to manly men like Leon The Mercenary, who fights in pursuit of... a flower. Perhaps they're closed-minded philistines unable to recognize the serious social commentary underscoring such scenes as Lei Fang's harrowing encounter with a groper on a Japanese train. In any case, those people won't get the point; they won't realize that the Xtreme games are Team Ninja's way of mocking them.

But that's okay. The nice thing about Dead or Alive Xtreme 2 is that no one has to get the point. It's a soothing, stress-relieving excursion that succeeds on its own merits.

For a few hours, I thought just the opposite. I played a quick round of volleyball, expecting to nail a perfect game, and... I lost! I played the new (and gorgeous) watercraft event, but... I had no idea where I was going! It was frustrating. I felt anything but soothed. Sure, the graphics were beautiful, there were more suits, and there were more mini-games, but I was quite upset. I hurriedly penned the following paragraph:

The first DOAX was easy to defend because of its high production values. Even though it was a silly spin-off, it was clearly a product of love. Since Dead or Alive Xtreme 2 lacks many of the advancements and refinements expected in a Team Ninja sequel, it's a harder game to praise. Marginally improved as it may be, I don't feel the love.

I was proud of myself. I felt as though I had come up with the perfect passage by which to both defend my high score for the original DOAX and justify slamming the second episode! I just needed to play the game a bit more -- to gather examples to prove my point -- and then the review would practically write itself. 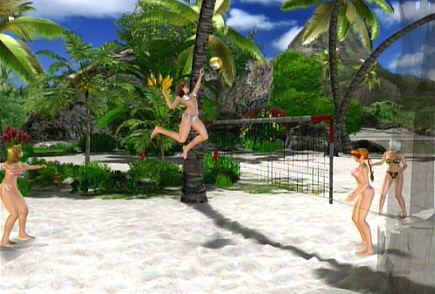 Something funny happened: I got better. Sometime during the second hour, after numerous misfires, the synapses in my brain finally clicked. I figured out how to play. Instead of standing around like an idiot while the volleyball soared past my head and bounced off the ground, I started spiking it into the other girls' faces. When lost during a jet ski race, I learned to slow down and follow the other women around rocks or underneath piers. Instead of staring at the rippling, glistening marina waters with eyes of confusion, I began to see a distinct path formed by yellow buoys. The game was no longer an exercise in frustration; it had become exciting.

I played for five hours straight.

Although I could whine about DOAX2's more challenging (but still fair) version of volleyball, the marina race is far, far better than volleyball ever was. There are a lot of courses -- more are unlocked after a first-place finish -- and the aquatic atmosphere provides a relaxing counterbalance to the adrenaline of high-speed battle. Even after mastering the basic course layout, there's still the "flag" system used to earn turbo boosts, the stunt system which lets me pull off some crazy flips, and the fair but persistent opposition. Plus, I get to stare at a gorgeous girl's butt while listening to "Hungry Like the Wolf", "Blazed up Melpomene", or any other song I feel like copying to the 360's hard drive. The marina race alone would make for a worthy game. 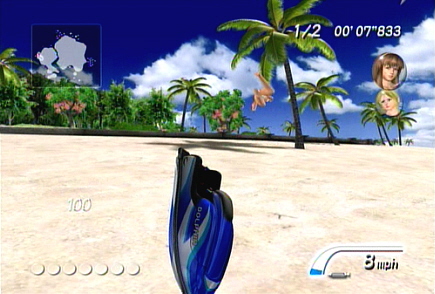 It also has some amusingly violent crashes.

There's a lot more to Dead or Alive Xtreme 2 than volleyball and marina racing. In fact, there's so much "game" here that it makes my over-analysis of the original look embarrassingly impressed by what now seems to be very little.

Whereas the original was basically "volleyball or bust", DOAX2 spices the vacation up with a bunch of optional mini games, my favorite being the water slide. Imagine you're at a fun-filled theme park: people cascade down a long rubbery tube while gleefully shrieking from the thrill of a 20-foot drop into a giant pool of water. Exciting but safe. Now imagine the water slide from hell, a gargantuan mass of twists and turns that makes the Olympic luge look simplistic by comparison. It's a difficult event that relies on precise banking and intelligent speed control.

Now imagine poor little Kokoro hurtling over the edge to her half-naked death.

As demonstrated by the impossibly difficult water slide and the laughably lewd "butt battle" fighting game, Dead or Alive Xtreme 2's charm is that it desperately tries to mask a world of absurdity with a straight face of sincerity. Even with all the craziness going on around them, the characters never seem to realize they're part of a massive joke. A fun, gorgeous, and immensely playable joke. 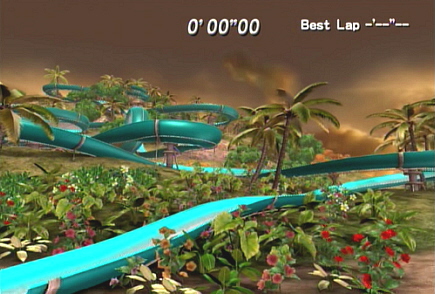 Despite its EVEN MORE XTREME THAN BEFORE trappings, the focus of the game remains on gift-giving. Like a dating sim without any actual dating, players are expected to win the hearts of their favorite girls and lavish them with hundreds of sexy swimsuits. For those who successfully fill up a girls' inventory, there's a significant reward (above and beyond the Xbox 360 Achievements). Furthermore, this time around, the game is more generous; never again will anyone spend 1,000,000 dollars on the saucy "Venus" suit, only to see that dreaded message:

Christie has trashed the Venus suit.

If one girl doesn't like her present, she'll now return it! ...at which point, it can promptly be re-wrapped as a gift for someone else. Traditional ninja girl Ayane might get irritated if she keeps receiving radio-controlled cars, but at least she won't destroy them. DOAX2's forgiving attitude rewards experimentation, which makes the game much less frustrating than the first. And if a girl particularly likes a certain swimsuit gift, then she'll show it off in style. 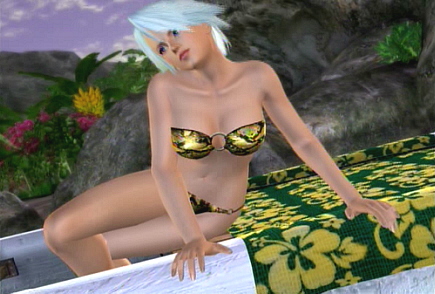 Female exploitation? More like admiration. If I were a girl, I wouldn't look at Dead or Alive Xtreme 2 with disgust -- I'd look at it with envy. These curvaceous ladies may not be the most intellectually admirable specimens of our race, but there's no doubt that they're living the good life... and that I'm vicariously living the good life through them. At its heart, that's what Dead or Alive Xtreme 2 is really all about.

If you enjoyed this Dead or Alive Xtreme 2 review, you're encouraged to discuss it with the author and with other members of the site's community. If you don't already have an HonestGamers account, you can sign up for one in a snap. Thank you for reading!

© 1998-2021 HonestGamers
None of the material contained within this site may be reproduced in any conceivable fashion without permission from the author(s) of said material. This site is not sponsored or endorsed by Nintendo, Sega, Sony, Microsoft, or any other such party. Dead or Alive Xtreme 2 is a registered trademark of its copyright holder. This site makes no claim to Dead or Alive Xtreme 2, its characters, screenshots, artwork, music, or any intellectual property contained within. Opinions expressed on this site do not necessarily represent the opinion of site staff or sponsors. Staff and freelance reviews are typically written based on time spent with a retail review copy or review key for the game that is provided by its publisher.