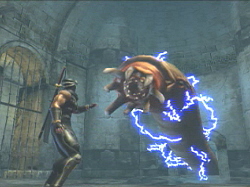 Ninja Gaiden told the story of the World's Greatest Super Ninja: Ryu Hayabusa, owner of the unimaginatively-named "Dragon Sword". Set two years before the first Dead or Alive tournament, Ryu's original Xbox adventure incorporated ninjas (SHOCK!), enormous flame-spewing dragons (DOUBLE SHOCK!), and even a few sexy females (100 MEGA SHOCK!). I daresay Team Ninja would have lost a lot of credibility if their ninja action game had turned out to be rotten. Fortunately, it was a thrilling experience! But, as fresh new games are released, even the most hot-blooded experience eventually becomes nothing more than a warm nostalgic memory. It doesn't matter whether or not games like God of War and Devil May Cry 3 are better; all that matters is that they're new. That's enough to send old classics to the closet.

Tecmo's hardworking team tried to keep the ninja spirit alive by releasing downloadable "Hurricane Packs" through Xbox Live. Each pack featured new enemies, weapons, and missions that made the game HARD AS HELL. The Xbox original was already a difficult game even before the Hurricane Packs forced Ryu to fight his evil twin; the original's very first boss, Ryu's wizened mentor Murai, trounced me handily with his twirling nunchaku. After making players deal with brutish ogres and a fresh set of fiends, sadistic director Tomonobu Itagaki dreamed up a crazy new "Master Ninja" mode. Rather than release a third Hurricane Pack, Team Ninja threw (almost) everything together and gave it the manly name Ninja Gaiden Black.

If Ninja Gaiden is the story of the World's Greatest Super Ninja, then Ninja Gaiden Black is the epic tale of how a lowly dog becomes a Master Ninja. With each successive play, Black adds enemies and obstacles that not only make the game harder, but keep it fresh  including a new whip-swinging Greater Fiend. To even survive the tougher modes, I had to sharpen my reflexes, train my memory, and master the game's many secrets. In short, I had to follow the Path of the Ninja.

At least, that's what I'd like you to believe. The truth is, after a year without practice, Murai smashed me across his mighty knee. Repeatedly. With tears streaming down my cheeks, I bitterly turned my watery eyes towards another Tecmo classic . . . . .

"Deception, I thought we had a deal! You promised to grant me power in exchange for my soul! DECEIVER!!!"

As if in response to my hateful words, small white letters appeared on the screen:

Do you choose to abandon the way of the Ninja?
YES

Are you sure?
YES.

Understood.
Ayane, the beautiful lavender-haired creature from Dead or Alive, approached my broken, beaten body. With contempt in her voice, she gave me a new lease on life. Thus was born Ryu Hayabusa: NINJA DOG. With fewer (and weaker) enemies, this mode makes the game accessible for people who can't handle the original's difficulty . . . but it doesn't make you feel good about it. 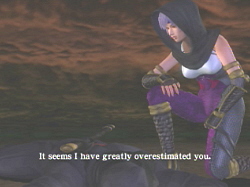 Back when I played through the original Ninja Gaiden and spoke down to Ayane, I felt like a badass. "I'm the World's Greatest Super Ninja! You're just Murai's little pet!" There was a definite sense of hierarchy, and Ryu  as possessor of the Dragon Sword  operated at a higher level than 14-year-old Ayane. In Black, when playing through Ninja Dog mode, these same scenes made me feel like a rotten no-good fraud. Ryu's mannerisms remained the same, but Ayane kept offering patronizingly-named items like "Ayane's Rations". It's almost like Team Ninja actually wants people to feel bad for wimping out!

Whether you play on Normal or barrel through the Ninja Dog mode, the full game remains as fun as ever. The magma caverns are still stressful and imposing, the music is still alternately ambient and menacing, and the organic demon Alma (reminiscent of The Jaquio) can still kick ass in thirty seconds flat. The only things missing are successive play (which was always implemented poorly anyways) and the Ninja Gaiden Trilogy, which has been replaced with the Ninja Gaiden arcade game.

Black goes beyond the original, providing a lot of content that people without Xbox Live may have missed. Harder difficulties feature new enemies, such as the red spider ninjas; with a slash from the blade, these crimson devils can set Ryu on fire. The game includes new equipment, such as the Lunar staff  a kick-ass weapon capable of a dozen flashy combos. Black also has the Master Ninja mode, which is an insane difficulty created specifically for this release. And for those who've squeezed every drop of joy from all five iterations of the original adventure, a fifty-level Mission Mode offers an unpredictable and thoroughly enjoyable test of strength  and you'll need your strength when you face Lord Doku and his samurai guards . . . all at once.

What Black doesn't have is the Intercept, which was an AWESOME ability available only in the Hurricane Packs. Intercept, which was basically a form of riposte, spawned an entirely new and aggressive style of play. I'm all for games offering alternate styles, but with the number of angry "WHERE IS INTERCEPT? I CANNOT WIN WITHOUT INTERCEPT!!@!" threads that have popped up on message boards, it's clear that people had become dependent on the move. I'm guessing that's why Team Ninja removed it  someone (damn that Itagaki!) must have decided that parries don't fit the "spirit" of ninja combat. Tecmo also weakened a few other attacks, such as the flying swallow dive (which is still great, but many enemies are now a bit better at avoiding it).

So, in short, Ninja Gaiden Black's improved AI and re-balanced mechanics force players to learn enemies' timing and master their favorite weapons. A single error can cost a huge chunk of life  especially at the hardest difficulties. However, even with all the intensity, Black still allows itself a few light-hearted moments. Consider this excerpt from Gen's ninja Diary (unceremoniously plucked from Gen's dead body):

"While it may be true that the Dark Dragon Blade is formed out of dragon bones, one of the greatest delicacies of the ancient world, our master's plan to grind it up and use it for his herbal tea is ridiculous. Of course I cannot tell anyone this, and therefore I must take this laughable secret with me to the grave..."

Ryu's original adventure had such an effect on me that I actually tried to emulate his awesome wall-cling in real life. (Yeah, I'm a nerd.) While Ninja Gaiden Black still offers the same great battles and same great moments (humorous or dramatic), the focus is no longer on experiencing the adventure . . . the game's now focused on truly becoming the World's Greatest Super Ninja by perfecting the art of battle. Playing each successive difficulty and being surprised by the changes  practicing new strategies to deal with opponents that simply didn't exist before  is both intense and thrilling. This change in focus is how Team Ninja managed to not only improve on one of the best games ever made, but to give it lasting relevance.

If you enjoyed this Ninja Gaiden Black review, you're encouraged to discuss it with the author and with other members of the site's community. If you don't already have an HonestGamers account, you can sign up for one in a snap. Thank you for reading!

© 1998 - 2022 HonestGamers
None of the material contained within this site may be reproduced in any conceivable fashion without permission from the author(s) of said material. This site is not sponsored or endorsed by Nintendo, Sega, Sony, Microsoft, or any other such party. Ninja Gaiden Black is a registered trademark of its copyright holder. This site makes no claim to Ninja Gaiden Black, its characters, screenshots, artwork, music, or any intellectual property contained within. Opinions expressed on this site do not necessarily represent the opinion of site staff or sponsors. Staff and freelance reviews are typically written based on time spent with a retail review copy or review key for the game that is provided by its publisher.