Akane Maniax (a.k.a. "Shooting Star Legend Gouda") covers the period immediately after KimiNozo ends. It assumes that players earned the coveted "Mitsuki ending", where wishy-washy hero Takayuki said goodbye to Akane's bed-ridden sister. Obviously, Akane was rooting for her sister, so she was a bit upset -- perhaps "shattered" would be the better word -- by Takayuki's decision. Originally released as a serial in PC magazines, this fan club disc (which runs around $140 now) compiles all five episodes and piles on a few cool bonuses. Even though the story revolves around Akane, she's seen through the eyes of a new lead character: a senior-year transfer student at Hakuryo Academy.

Episode One: His Name Was George! 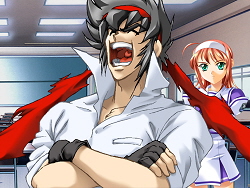 Anyone who's moved from one school to another has felt that uneasy fear of solitude, but there's also the hope for reinvention. Even though all your old friends are miles away, no one at your new school knows what kind of person you've been or what foolishness you've committed in your bothersome past. Bullies can become stand-up students, renowned troublemakers can bask in anonymity, and geeks can party hearty!

Jouji (George) Gouda is a major geek. Not in the ugly unwashed nerd sense, but in the bandanna-clad, wild-haired, open-collared, Gundam freak sense. His one significant non-geek talent is baseball -- he's been bred to become a home-run king. When Akane Maniax begins, Gouda has just arrived on the schoolgrounds and is already proclaiming his upcoming awesomeness . . .

"At this school, I will begin my new life of glory!"

Being a visual novel (and therefore based around still pictures), most characters in Akane Maniax just sort of materialize onscreen. On the other hand, Gouda often zoooooooms in from the right, trailed by a blurry after-image. This emphasizes Gouda's over-the-top personality. He's even drawn differently from everyone else, with thick black outlines (reminiscent of old '80s anime) instead of thin borders. He's voiced by Tomokazu Seki from Gundam Seed, since development team age can somehow always afford to pay for famous voice actors.

When Gouda zooms into the classroom for the first time and is introduced to his peers (Yoroshiku!), he proudly announces his intention to become the school's all-time greatest baseball star. He's informed by Takeo (the fat bespectacled nerd who's about to bust out of his tightly-buttoned shirt) that a senior-year transfer can't join the baseball team. Signups have already ended.

He laughs quietly. He laughs loudly. Finally, poor Gouda suffers a complete mental breakdown right in the middle of class, collapsing to the floor in a weeping heap. Although his expressions are over-the-top and comedic, this would be a serious blow to any young man's pride. Somber music, matching and possibly surpassing that heard in KimiNozo, reinforces the moment's disappointment: this is a scene of excruciating heartbreak! Jouji Gouda, who dreamed of leading a baseball team to victory in his senior year, has forever lost his chance. His last year of school will pass in anonymity.

Of course, the whole incident also makes Gouda look like a dumbass, because anyone who had done the least bit of research would have learned the rules before transferring. That's basically what nerdy Takeo -- accompanied by his own hard-rocking Japanese theme music -- flat-out says, rubbing the whole situation in Gouda's tear-streaked face.

But Gouda isn't like the wimpy Japanese high-schoolers that normally serve as gal game protagonists. He's a man of ACTION. After a few tearful moments, Gouda stops slouching, stands tall, and clenches his fist in iron resolve.

"Yes, my heart is aflame! I have a plan that cannot fail!"

"YOU AREN'T LOOKING AT MY EYES!"

Takeo breaks out in a cold sweat. Suspenseful music resonates through the classroom, accentuating this showdown between courageous hope and cowardly oppression. Flames of passion rage behind Gouda's reinvigorated image.

"YES! My plan . . . . . . . is to fail and repeat senior year! Then I can become the school's greatest baseball champion next season!"

After a brief moment of stunned silence, the class unanimously declares Gouda a "genuine idiot". Amidst the exhortations, one girl introduces herself as our man with a (dumb) plan walks to his seat.

"My name is Akane Suzumiya. It's nice to meet you."

From here, everything changes. Stricken by her beauty, Gouda's next words are in your hands. Do you simply say, "Akane! I love you!" Do you declare her a vision of beauty and ask her to marry you? Or will you select the romantic "I want to die together with you!!!"

I picked option three. The class was astonished, Akane was offended, and the sultry schoolteacher was amused. As Akane frowns, Gouda internally exclaims: "OH SHIT!" and quickly comes up with something to save himself.

If you instead pick option two, Gouda even goes so far as to invite the whole class to the wedding! Unfortunately, that doesn't save Gouda from rejection and humiliation. After such an embarrassing first day at school, he's pretty much lost any hope at a glorious reincarnation.

Later on, the homeroom teacher (in distinctive pink text, since each character is color-coded) tells Akane to give Gouda a little tour . . . and wishes Gouda luck. Akane simply points out a few places in the hallway, but that's not enough for Gouda.

In his blissful ignorance, Gouda has pointed to the very tree where Akane's sister Haruka confessed her love to Takayuki three years ago . . . a confession that left lasting scars on Akane's heart. Her sister sits alone in her bedroom, lost in lonely memories of the man who abandoned her. Meanwhile, Akane spends every night cursing the fickle nature of love, lonely nights pining for the gentle and open-hearted sister she used to know.

Akane starts to tell Gouda a bit of the tree's history. She tells him that it's a place where two people come to confess their love for each other . . . and then Gouda screws everything up by assuming Akane brought him here to declare her undying love for him. We learn this because the game shifts into "Gouda Innerspace", where a facsimile Akane runs through several different possible ways to announce her love. Expect to see Gouda Innerspace quite often.

You should also expect to see a lot more amusing situations, such as when Gouda proposes the school host an "Akane-fest", complete with Akane dancing in skintight samba garb. Akane is not amused. One classmate punches him in the face. Gouda's attempt to join the swim team -- since Akane likes swimming -- doesn't go too well, either. He sucks and nearly drowns. Akane saves his life, but she's not impressed. As Gouda spits water out of his mouth and tries to catch his breath, Akane gives him a piece of her mind.

"What happened to all that talk about baseball? Now you're trying out for the swim club instead. I guess your love for baseball was just a lie. Too bad. I actually thought you were sincere."

Even when it comes to sports, Akane believes a man's declaration of love is insincere and meaningless. When Gouda tries to join the swimming club, she assumes he doesn't love baseball anymore.

But Gouda's resilient. Later on, when he has another chance to talk to Akane, Gouda delivers a long speech about how he loves baseball, but he's trying his best to succeed at swimming even though he's not very good at it and other people might make fun of him.

To Akane, who's depressed and afraid, that kind of hope and enthusiasm about life is a foreign concept. She's not like Gouda. When Akane falls, she breaks. When Gouda falls, he gets up the next day and falls even harder. He's not going to take the easy way out of life, even if that's what everyone expects of him. He's already good at baseball. He can return to that path at any time. Right now, he has a more important road to follow. Gouda may be a terrible swimmer, but he won't give up on something so important. Akane is scared. With every word, you can hear that she's coming closer to tears . . .

. . . and the rest is up to you. After you're done with the main game, you can watch some hilarious "previews" and "commercials", which is a ridiculous concept itself when you consider that this is just a fan club special disc and not a commercial release.

Whenever you look at a picture in the CG gallery (which features some AWESOME music) Akane provides humorous commentary. For example, just check out the "samba Akane" pic! There she is, happily dancing (in Gouda's imagination) with see-through attire and yellow nipple covers. While you look at the picture, Akane exclaims: "NO NO NO NO NO! Don't look!" Or perhaps the seductive picture of Akane in a wedding dress: "What the hell is this?" Akane crying into Gouda's chest: "Don't look at this one. It's a little embarrassing . . ."

It's a cute touch, and the whole game shows a lot of heart -- a lot more heart than I'd expect from a fan club freebie. Honestly, I like Akane and Gouda a hell of a lot more than I liked Haruka, Mitsuki, and Takayuki from Kimi ga Nozomu Eien. While KimiNozo is about three people burrowing their way deeper into despair and self-destruction, Akane Maniax is about someone who's trying to dig his way up to the light, and bringing the girl he loves up there with him. Akane's in pain, and Gouda is just the medicine she needs . . . but will you be able to help Gouda heal her wounds, or will you instead guide him towards an easy (but false) life of self-delusional fantasy? That's Gouda's battle. Don't let him down!

As a super-special bonus, this disc also includes Kimi ga Nozomu Eien: Another Episode: The Wind Stirs the Water's Surface, which does manage to squeeze in a single shot of skin. But make no mistake: Akane's story is the real highlight.

If you enjoyed this Akane Maniax review, you're encouraged to discuss it with the author and with other members of the site's community. If you don't already have an HonestGamers account, you can sign up for one in a snap. Thank you for reading!

© 1998 - 2022 HonestGamers
None of the material contained within this site may be reproduced in any conceivable fashion without permission from the author(s) of said material. This site is not sponsored or endorsed by Nintendo, Sega, Sony, Microsoft, or any other such party. Akane Maniax is a registered trademark of its copyright holder. This site makes no claim to Akane Maniax, its characters, screenshots, artwork, music, or any intellectual property contained within. Opinions expressed on this site do not necessarily represent the opinion of site staff or sponsors. Staff and freelance reviews are typically written based on time spent with a retail review copy or review key for the game that is provided by its publisher.