A quiet, soulful voice cuts through the silence.

As soon as the opening monologue hits, one thing is immediately obvious: Welcome to Pia Carrot is a stylish game. As the words fade from the screen, a slickly-produced and attention-grabbing short plays out, briefly showcasing each of the lovely girls you'll meet. It feels like an advertisement . . . which is not surprising since this intro actually was an advertisement, aired on broadcast TV in Japan.

"Please buy our game!" the girls plead at the end.

A plea that must have fallen on deaf ears, since the PC-FX's second in the sun was over before it had begun. Releasing a bunch of sexy dating games no doubt looked good on paper, but that plan was burned in the flames of the PlayStation and Saturn's mainstream glory. It's a shame, too; past the style, beyond the gloss, this is a profound gaming experience.

I can already hear alarms of disbelief blaring after the word "profound", so let me back up a bit, and start from the very beginning . . . . . 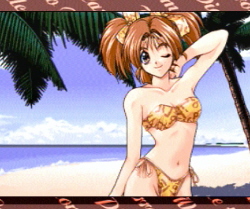 Once upon a time, there was a boy named Yusuke. He loved his computer games, he loved his comic books, and he loved the girls. Not his girls, mind you  just random girls that he admired from afar. Basically, Yusuke loved life. He did not, however, love studying. Too much partying put poor little Yu in a bit of a bind.

Yusuke's father owns a family business. Anyone born into a homegrown company knows that "responsibility to the family comes before personal freedom!" But, nice man that he is, Yu's father offered his son an out; a bit of a wager, if you will. "Earn high grades . . . and you're free to do whatever you want. I'll even pay for it." In this case, "whatever Yu wants" meant frolicking across summertime beaches chasing after bikini-clad vixens.

Well, Yu is a bit of a loser, so, naturally, he didn't quite make the grade. Alas poor Yusuke! Now Yu must perform menial labor at the Pia Carrot restaurant.

Yes, at first, Yusuke's adventure seems little more than a "work simulation", focused on resource management and attribute balance. Want to increase social charisma? Fill in for a day as a waiter. Looking to accumulate academic prowess? A morning of studying is in order! Yusuke's plans wither away in a grueling season of labor, his sexy summer uprooted by boredom's hand. That's the punishment for being a loser.

. . . . . but this loser's arrival ends up turning the Pia's little inbred world on its ear.

During the work day, Yu'll run across (or into) eight different girls, each in the flower of their youth. That number doesn't include little sister Rumi, by the way. In a shocking twist, the hero doesn't boink his bouncy baby sister. You'd be surprised how rare that is in these Japanese dating games. Each girl demands a particular assortment of attributes; the glamour girl has a fetish for fashion, the academic wants a gentle boy with brains, and Satomi (Yusuke's childhood crush) respects an earnest man with some backbone. Knowing when to say the right thing will help with all of this, but the biggest boost to Yusuke's appeal comes through textbooks and manual labor. Nothing makes a body buff like shelving crates in the stockroom.

Hard work does a man good (in this case, literally) but too much stress can wear Yu out. When the week's work has worn Yusuke down, it's time to schedule some additional hours for rest and relaxation. Can't let the old bones wear out from exhaustion, or Yu will oversleep and miss a day . . . and that increases the dreaded "CRITICISM FACTOR"!

As Yusuke interacts with the ladies, his attributes (niceness, communication ability, et cetera) will increase. But pick the wrong thing to say, and . . . . .

Girl: "You wouldn't understand my problems."

Yusuke: "Hey hey, if you want that, let's check into a Love Hotel together!"

Bing! Criticism Factor goes up by one. The girls like a man with a variety of traits, but none of the lovely ladies appreciate a lecherous boor. Act like a loser, and they'll just wait for someone better to come along.

~we've been waiting for you~

In one sense, a free-flowing follow-up to the "Welcome!" greeting, delivered to ravenous restaurant patrons. In another sense, a single line that encapsulates the mentality, conscious or otherwise, of all the women Yusuke will meet. Each girl has been waiting for Yu  waiting for him to come along and help resolve her personal conflicts and emotional tribulations. Waiting to demonstrate something important to you, the player. Something important about living.

Herein lies the power of Pia Carrot. From beginning of game to end, you must choose a single girl to pursue (and perhaps even screw  though to win with some, you've got to got to play innocent the whole way through). Oh you can try to woo them all, but that's a recipe for disaster. As you court a particular girl, her story will slowly unravel. This in and of itself is not unusual  standard form for most Romantic Adventure games. The uniqueness of Pia hinges upon the dual nature of the storytelling. Not only is Yu the character charming a particular lady, but you the player are exploring some very deep, very touching, very real-world-applicable emotional issues. This game always feels as though it has purpose; a raison d'etre beyond serving as an animated skin-flick. You don't probe the girls' minds merely to see nekkid drawings; you persevere to learn more about the way human nature works.

Work as a waiter at closing time in early August, and you will spot a young green-haired girl, sitting alone at an empty table, wistfully staring out the window . . .

Yusuke: That's our school uniform, isn't it? I wonder what she's looking at outside... she looks so lonely...

Yusuke: "Well, yes. If you don't mind, would you like to settle the bill now?"

Girl: "I heard you, mister. Geez... what an annoying person."

Yusuke: Grrr... no! Calm down, calm down. I must remain calm. Getting angry at customers would be bad. I must politely ask her to return home!

Of course, she then skips out without paying. And to make matters worse  she tries to pull the same stunt the following night! At that point, you can either react in anger, or you can treat her like a human being. No one is entirely incorrigible; try to understand her motivations, and you just might learn something new.

Naturally, you don't have to wait around for sexy single customers to show up. You're surrounded by gorgeous waitresses, after all!

For example, consider Yukiko Kawai  a lovely raven-haired server, a gentle and overly-submissive girl. Her boyfriend is a jerk, and she suffers from a serious fear of rejection  to the extent that she's hidden herself behind a series of masks. Some people know her as the cute, stylish waitress. Others know her as a Samurai Shodown junkie. She's a girl with varied interests, trying to get along with intolerant peers  afraid that her friends would drop her like a rock if they knew the real Yukiko.

This embarrassment of oneself is a common real-world issue. Did you know that a lot of girls, in real life, pretend to be less intelligent and geeky than they really are, in hopes of attracting the hunky jock-type boys? Yukiko is a severe case, but not an unrealistic one. 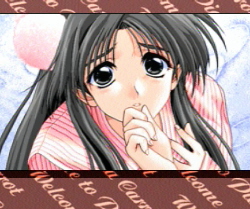 Welcome to Pia Carrot teaches us something important  that even a loser can have an impact just by being a good guy. 'Play around' and Yu will be forgotten and alone in the end. Do the right thing by a girl and, through 'teaching' her, you'll learn a valuable lesson as well. This is not a case of exploiting weakness to get it on with a girl; weakness and strength are inexplicably tied. In life, people are forced to develop power to compensate for their inadequacies, or else they'd never be able to improve their station in life. Your job is to show the girls their own strength  the strength that is obvious to everyone else, even though they're wrapped up in their own insecurities. It's a great concept for a game, since the women you'll meet are all real  the kind of girls you might actually meet in your own not-so-mundane life. Not-so-mundane? Yes, this game also demonstrates that there's beauty in life without adding sex to every scene or concocting outrageous scenarios.

I hate to proclaim a game "the best of all time", as something better could come along, but as far as I can see, Pia Carrot is the best hentai game of all time. It's a believable experience, in a genre that basks in the ludicrous. It contains well-timed full frontal nudity, in a genre that becomes more unrealistically conservative with each new console generation (yet more gratuitously sexual each year on the Japanese PC). Come on developers, try to strike a balance between total chastity and five-girls-at-once! But even in the particulars, Pia never did try to be like the rest. After all, it even featured full cast voice-acting  at a time when the genre typically assigned voices only to the females. Everything about this game, from the presentation to the interface to the content to the hidden secrets, is so carefully constructed that I absolutely cannot imagine any way in which it could have been improved.

In other words, Pia Carrot is a singular occurrence in the console gaming world  a provocative work forged in the kiln of reality, but steeped in hot-blooded youthful fantasy. Between missed opportunities and general clumsiness, few boys actually live the way Yusuke lives, but Welcome to Pia Carrot makes such a life seem possible, even noble. The game lets you take your own wistful 20/20 hindsight and apply it to Yusuke's summer of love  and from there build a better world, even if only for two.

If you enjoyed this Welcome to Pia Carrot!! review, you're encouraged to discuss it with the author and with other members of the site's community. If you don't already have an HonestGamers account, you can sign up for one in a snap. Thank you for reading!

© 1998 - 2023 HonestGamers
None of the material contained within this site may be reproduced in any conceivable fashion without permission from the author(s) of said material. This site is not sponsored or endorsed by Nintendo, Sega, Sony, Microsoft, or any other such party. Welcome to Pia Carrot!! is a registered trademark of its copyright holder. This site makes no claim to Welcome to Pia Carrot!!, its characters, screenshots, artwork, music, or any intellectual property contained within. Opinions expressed on this site do not necessarily represent the opinion of site staff or sponsors. Staff and freelance reviews are typically written based on time spent with a retail review copy or review key for the game that is provided by its publisher.