Since youre reading this I guess you must be a diehard PC Engine fan whos in the mood for a balanced and cleverly designed all-girl fighter.

You took one glance at the title and came running for naked chicks. At least I certainly hope thats the case, because otherwise youre pretty much SOL. 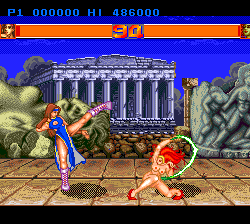 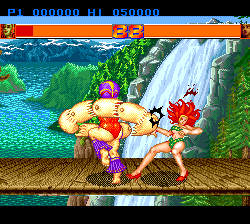 Thats right my randy young friend, this game does indeed provide the tasteless filth that you so desperately crave. Youll be treated to a digitized pinup of a hot girl in her underthings after you win the first round, this cheap display accompanied by the most annoying chiptune in the universe. But dont get your digitized panties in a bunch just yet  win the second round and you get to see it ALL . . .

. . . except for her crotch, because its been abducted by ninjas in accordance with Japanese law. You know, the one that requires all depictions of genitalia to be covered with either a mosaic or half a dozen probing tentacles. Not that it really matters, since the models are all pretty homely to begin with and have creepy animated eyes that soullessly wink at you before the camera pans down their unappealing bodies.

Speaking of unappealing things, you only get six characters to choose from and their designs settle for somewhere between pathetic and merely lame. Yes, tremble before the prestigious champions of striptease martial arts  whose ranks include chronically obese woman wearing purple wig, butch shemonster sporting mohawk, and blonde ballerina in stockings. I wasnt really trying with that last one, but then neither was the artist. Their special moves, besides requiring divine intervention to pull off successfully, occasionally flash a bit of skin for a few seconds but theyre nowhere near as sexy as those blinking babes in between matches. Well, except maybe when the fat woman exposes her mammoth bosoms and starts spinning them around to engulf her opponent in a furious flurry of flabby flesh. Dont worry, youll get plenty of chances to witness such assaults seeing as how the computer-controlled fighters seem to have a direct line with Jesus.

Theoretically youd control this sad group using the 6-button pad, except that the different attacks are practically identical anyway. The controls are terribly unresponsive, the gameplay sloppy as hell, and it basically feels like something that was slapped together as an afterthought to the already inept dirty pictures. (Shocking, I know.) Once again this doesnt really matter because most of the time you can beat the default AI just by using the same kick over and over again. Of course, the higher levels of difficulty are barely even playable since your rivals will just endlessly blast you with so many instant special moves that even Guile would shake his flat-topped head in disgust. Dont expect a final boss or an ending sequence either; you just see all the same pictures again. 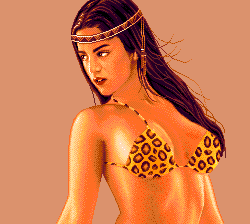 In conclusion, it is my objective and unbiased opinion that Strip Fighter totally blows. Now if it had been on Turbo CD with cheesy 70s disco porn music and animated intermissions featuring wobbling jello-breasts . . . well, it still wouldnt be worth a damn but at least then it might have enjoyed some decent kitsch value. The price this game goes for is just plain insulting, especially when you could get a truly awesome Super CD fighter like Flash Hiders or Asuka 120% instead. I suppose you might enjoy it if you were some sort of rich pervert who maintains low standards and always wanted to see Ryu execute his rising dragon on Chun Li. Me, Id say that if you really want to mix sex and violence that badly youd be a lot better off just pulling out those Playboys from under your mattress and then repeatedly punching yourself in the face.

If you enjoyed this Strip Fighter II review, you're encouraged to discuss it with the author and with other members of the site's community. If you don't already have an HonestGamers account, you can sign up for one in a snap. Thank you for reading!

© 1998 - 2022 HonestGamers
None of the material contained within this site may be reproduced in any conceivable fashion without permission from the author(s) of said material. This site is not sponsored or endorsed by Nintendo, Sega, Sony, Microsoft, or any other such party. Strip Fighter II is a registered trademark of its copyright holder. This site makes no claim to Strip Fighter II, its characters, screenshots, artwork, music, or any intellectual property contained within. Opinions expressed on this site do not necessarily represent the opinion of site staff or sponsors. Staff and freelance reviews are typically written based on time spent with a retail review copy or review key for the game that is provided by its publisher.