Today I would like to relate a nice little anecdote.

I first stumbled upon the original Street Fighter at the local pizzeria; the cabinet looked pretty worn and was tucked away in the back, right next to the delicate aroma wafting from the restrooms. Someone had set the machine to freeplay, imagine that, and having never played it before, I was most eager to rectify that. After all, this was the (then) little-known precursor to World Warrior, the juggernaut that had incited arcades all over the country to explode into a furious frenzy of fighter mania!

Well, to make a long story short  the breadsticks were late, the pizza was as greasy as the teenager who made it, and this game sucks.

But you surely deduced that simply by glancing at the score, so lets go ahead and join the iconic blackbelt Ryu, here depicted as a red-headed stepchild and sporting a dorky gi with ridiculous crimson slippers, as he takes on the nine greatest (and thoroughly non-selectable) fighters that the entire world has to offer! Emerge triumphant from this international GAUNTLET OF DOOM and hell face a final showdown with a battle-scarred veteran youre no doubt already well acquainted with, the towering kickboxer Sagat! Only then will our courageous karateka at last prove his manliness to all and be crowned KING OF THE HILL!

The best of the best apparently includes the likes of:

MIKE (the black man) is essentially a prototypical M. Bison  the psychotic boxer who stole Balrogs name in a feeble attempt at concealing his transparent parody of beloved pugilist/thug Mike Tyson. Capcom claims theyre completely unrelated, naturally, but Ive made it a point to ignore them ever since they retroactively decided that Poison, the sexy chick from Final Fight, was actually a dude. (Yeah, right.) And yes, this game does mark our fond introductions to Adon, Gen, and Birdie, but theyre so uninspired and lame that no one would have ever cared had Zero 2 not come along years later to do them up right. You know, by giving them distinctive appearances, actual fighting styles, and decent AI. 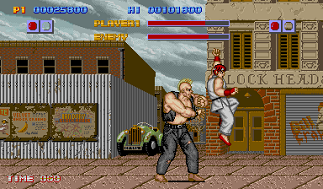 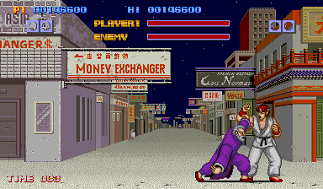 Mind you, these moronic character designs wouldnt bother me if the game was any fun to play, but beyond a good chortle in response to its ineptitude, sadly thats not the case at all. No, instead you have game balance thats honestly laughable, while the controls are so floaty that I feared the joystick would get up and sneak away if I didnt keep my hands firmly clamped on it at all times. Meanwhile, Ryu doesnt so much walk towards his opponents as much as he takes little spastic hops in their direction. Dont count on landing a flying kick to the face, either; while in midair you can only attack at the very end of a jump, leaving you a sitting (er, airborne) duck until then. The designers did place the now legendary six-button layout at your disposal, offering punches and kicks of three different strengths  yet theres hardly any recoil when someone gets hit, so your opponents can just shrug off your meager assaults, move in, and land only a few crushing blows of their own before our heros reduced to a bloody pulp. Yeah, thats right  even when theyre not employing their lethal special attacks, the enemy fighters can generally smack Ryu into oblivion with a pittance of successful strikes; pity that he cant say the same. At least the computer follows a set number of patterns pretty much religiously, allowing you to predict each challengers movements through rote (and additional coinage), but its still gratingly common for Ryu to expire within the first ten seconds of a particular round when his villainous rival proceeds to leap forth and cruelly wail into him before you can do anything about it. 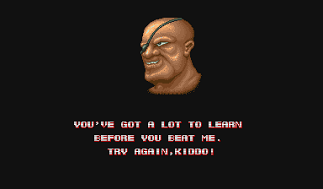 YOOVE GAHT AH ROHT TOO RAHN BEFOH YOO BEET MEE, TOORIGH AGAAYN KEED (heh heh heh hahahahaha)
Now had Capcom merely left things like this then the sum of their efforts would be completely unfair and bordering on unplayability. (Im specifically looking at you, Adon. You and your thrice-damned Jaguar Kick!) Hence the need for an equalizer, in this case a quick and dirty fix; the potency of the (then) secret moves in this game is utterly ridiculous. On the one hand, theyre literally painful to execute thanks to the wonkiness of the joystick; unleashing the familiar ForwardDownDownForward motion for a well-nigh unstoppable DOHRAHGAHN PAHNCH! feels like nothing more than arbitrary luck. On the other hand, which is actually more of a taped fist thats been liberally applied to broken glass, these attacks inflict a jaw-dropping amount of damage assuming you can actually manage to pull one of them off. Youve really got to see one in action to believe it, gaping in disbelief as you brutally SAVAGE a third or even HALF of your opponents health bar in a single go! Sure, youll furiously struggle with the horrid controls to crank out a fireball, often frantically hopping just out of reach so as to avoided getting pounded in the meantime, until sometimes  just sometimes!  Ryu will actually scream out a muffled HEHROOFIGHYAH! and send his rival to suddenly collapse in the dirt, as if felled by a Mack Truck. 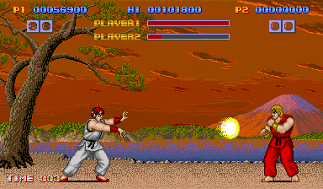 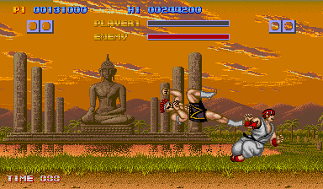 Thats right, Ryu  float like a crack addict, sting like a bellowing rhinoceros. Its only fair; in the world of Street Fighter, the sudden and oh-so cheap annihilation of either side, which one of them being determined more or less haphazardly, is ultimately the name of the game. The restaurant I was in could have run a special; if someones not flattened in thirty seconds or less, the pizzas free. Their machine certainly was . . . and with good reason, as it turned out. Free, that is. Not flattened. Although thats not to say that I wasnt sorely tempted on more than one occasion.

This 1987 classic certainly helped pave the way for a true phenomenon in the form of Street Fighter II. And I suppose the backgrounds look alright. The announcer is probably superior to most of their recent attempts. You can even be deem it to be of historical importance for the concepts it pioneered, most notably the button layout and the quarter-circle projectile. But actually bother to play the thing and youll quickly realize that just about all it really has going for it anymore is a highly recognizable title. Seriously, had its illustrious sequel been called anything else, the name Street Fighter would probably be about as well-known to the average coin-op fan as Street Smart and Violence Fight. Unsurprisingly, the next time I stopped by that grease parlor theyd retired their washed-up, broken-down old Street Fighter cabinet with a shiny new Mortal Kombat.

It was a marginal improvement.

If you enjoyed this Street Fighter review, you're encouraged to discuss it with the author and with other members of the site's community. If you don't already have an HonestGamers account, you can sign up for one in a snap. Thank you for reading!

© 1998-2022 HonestGamers
None of the material contained within this site may be reproduced in any conceivable fashion without permission from the author(s) of said material. This site is not sponsored or endorsed by Nintendo, Sega, Sony, Microsoft, or any other such party. Street Fighter is a registered trademark of its copyright holder. This site makes no claim to Street Fighter, its characters, screenshots, artwork, music, or any intellectual property contained within. Opinions expressed on this site do not necessarily represent the opinion of site staff or sponsors. Staff and freelance reviews are typically written based on time spent with a retail review copy or review key for the game that is provided by its publisher.