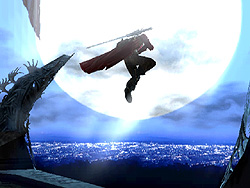 That's what my good friend Dave had to say about the first DMC, but there's something he failed to consider. I'm not referring to Capcom farming Devil May Cry 2 out to a less talented crew -- no one expected that. What Dave didn't consider is that no matter how many sequels Capcom made, no matter how many wicked awesome moves they added, each new DMC would be just another "enemy of the year" adventure, each pitting Dante against some wicked demon who is (supposedly) stronger than the evil incarnate previously defeated. "That other demon only appeared once every five thousand years. I, the omnipowerful Mundarius, appear only once every five MILLION years! RAAAHHHHHHH!"

Fortunately, that's not what happened here! Devil May Cry 3: Dante's Awakening tops the original not because of a bigger and badder demon to be offed, but because it has a scope that the original in all of its awesomeness couldn't have possibly matched. DMC 3 actually goes back in time and chronicles the most important moment of Dante's life -- the night during which he learned the truth about his birth and fought his twin brother Vergil, his only remaining kin, in an epic battle to the death. Badass to badass, this personal battle means a lot more than lowering the boom on some blobular demon.

But now we get to the part that doesn't make much sense. In Devil May Cry 3, Dante's become a badass to the ridiculously n'th degree -- his adolescent form here would MURDER the tame swashbuckler from Capcom's original! Not that I'm complaining. Who wouldn't admire a guy who challenges a 50-foot-tall ice-spitting hellhound to a fistfight or compares a self-important deity to a backed-up toilet? Even better is when Dante shuts up and kicks ass by bodysurfing on demons' backs or sparring hot devil hunters in the grooviest gun-kata since Equilibrium. Dante proves again and again that not only is he one cocky SOB, but he's got the goods to back it up. And damn it all, playing as this guy makes me feel like a badass, too.

Dante shows off his goods with Capcom's highly-touted "style" system -- hell, that's about the only thing the boxback even mentions. As quick examples: in Gunslinger style, Dante rains death from above and in Quicksilver style he stops time itself. There are four more, and these styles are a great way to add depth, flexibility, and outright badass-ness to the game without sacrificing game balance. Any fool who says "just let me use ALL of his moves at once!" doesn't realize just how many friggin' moves this guy's got! Every weapon comes with its own selection of combos and special attacks, and the various styles affect each weapon differently. Swordsman Dante twirls 'chuks like a madman but flings waves of ice and fire from his twin elemental sabres!

Having a lot of moves doesn't automatically make an action game fun. For example, Nanobreaker has crap-stained diaperloads of fully customizable combination attacks . . . but that means nothing when a few powerful combinations are so much easier to pull off than others. By dividing Dante's available attacks between different styles and weapons, every attack is easily performed; even a beginner can pull off impressive-sounding moves like Whirlwind and Rising Dragon because both are done by simply pressing forward + triangle. There's no up up down down PPK jibber-jabber here!

Despite the ridiculously huge repertoire, DMC 3 is one of the most challenging action games to date. A lot of people compare it to Ninja Gaiden on the Xbox, which is a horrible comparison because Ninja Gaiden's enemies block everything and DMC 3's enemies don't. The closest similarity between the two games is that you've got to approach every fight seriously or else you're gonna get ROCKED. Since Capcom knows that Dante friggin' rules, they weren't afraid to throw an evil teleporting grim reaper boss into the second level. Capcom knows that if Dante's Stinger thrusts don't connect, the aerial bullet rain storm will . . . but does the player know this? At first "no", but with experience and practice, this is one of the deepest combat systems around.

If DMC 3 sounds like a straight-up action game, that's because it is. No more winding walks up abandoned cliffs or boring exploration levels! DMC 3's first scene is a brawl in Dante's as-yet-unnamed shop that lets you get a taste for racking up insane stylin' combos, and later levels keep churning out new types of monsters to slaughter. Forget repeating the Round Trip attack for high rankings -- DMC 3 rewards real style, and that means variety. Do the same thing too often -- any thing -- and you'll drop from Sweet! to Dope faster than Dante drops after a soul-sucking kiss from the sexy sorceress Nevan.

The coolest part of combat is that Dante can switch between two guns and two melee weapons at the touch of a shoulder button, which lets you rack up massive points and pull off INSANE combination attacks, like knocking abyssal specters up into the air with a sword, bouncing them with rapid handgun blasts, then juggling them across the room with the Beowulf combat gloves before blasting the specter's mutilated corpse with a rocket. The more you mix it up, the more money you earn to buy new items and skills at the shop like the mighty Jam Session that summons a swarm of bats from Dante's electric guitar weapon.

One problem with the first Devil May Cry is that the story pretty much didn't exist throughout the entire middle of the game. Dante's Awakening is loaded with FMVs before and after levels, and they're some of the most ridiculous nonsense I've ever seen. After first learning the devil trigger ability, Dante races down the straight vertical side of a tower while gunning down hundreds of gargoyles. The climactic moment involves Dante spearing about four of these flying vermin on his sword "Rebellion", then leaping through the air with the full moon in the background. It's like E.T., except with hard rock music, blood, and no bicycle. At this point, a giant killer whale that also happens to be flying through the air swallows Dante and the fleshy eighth level (heartworms and all) begins.

When it's not being super-cheesy, the story is actually really cool. The first battle between Vergil and Dante ROCKS -- it's a swordfight atop a demonic tower underneath the full moon in the pouring rain. Sibling rivalry, exploited by a dark priest for his own diabolical ends: this is a classic setup, reminiscent of Wolf Team's masterpiece El Viento. However! Capcom's mid-game turnabout flips the plot on its head -- this ain't no cliché. DMC 3's story takes twists and turns, but after twenty levels it ends exactly as it should: with an intensely gratifying finale that makes Dave prematurely squeal, "Game of the year!" Compared to Devil May Cry 3: Dante's Awakening, the original is just a minor episode. Now if you'll excuse me, I'm gonna go kick some 50-foot-tall hellhound ass.

By the way, the camera angles are a lot better now.

If you enjoyed this Devil May Cry 3: Dante's Awakening review, you're encouraged to discuss it with the author and with other members of the site's community. If you don't already have an HonestGamers account, you can sign up for one in a snap. Thank you for reading!

© 1998-2022 HonestGamers
None of the material contained within this site may be reproduced in any conceivable fashion without permission from the author(s) of said material. This site is not sponsored or endorsed by Nintendo, Sega, Sony, Microsoft, or any other such party. Devil May Cry 3: Dante's Awakening is a registered trademark of its copyright holder. This site makes no claim to Devil May Cry 3: Dante's Awakening, its characters, screenshots, artwork, music, or any intellectual property contained within. Opinions expressed on this site do not necessarily represent the opinion of site staff or sponsors. Staff and freelance reviews are typically written based on time spent with a retail review copy or review key for the game that is provided by its publisher.