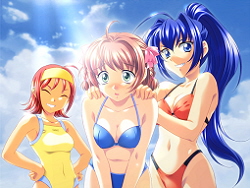 I hate to admit it, but I'm a fan of "Gal" games. No, they're not made for girls  quite the opposite. These are games where the objective is to pretend to be a loser Japanese kid and date cute chicks. PC games are famous for filling such titles with high-schooler nudity, sex, and sometimes even worse! I'm not a fan of "worse", but nudity and sex are always a bonus. My cultural fanboyism is so bad, I even collect the PG-rated Dreamcast ports. "For the high-quality stories," I tell myself. A delusion, mind you. Despite the standard fan rhetoric, most Gal game stories are pretty trite and repetitive, falling into one of a few stereotypes:

After each and every one, I ask myself, "Why do I waste my time on these horrible games?" The usual (honest) answer is "naked chicks". My new answer is: Kimi ga Nozomu Eien, a name that roughly translates to "The Eternity You Desire". It could translate to "Slutbagger" for all I care  it'd still be a great game. Seven duds in a row, instantly forgiven by one single shining diamond. A jewel so vibrant that other gems, like To Heart and X-Change (haha just kidding about that one), gleam a turdly brown by comparison.

When I bought KimiNozo, I was actually looking for My Dear Mister Big-Dick. Apparently that one's out of print. So, instead of the "haha" game, I ended up  purely by chance  with a dramatic soap opera of human misery and self-destruction. After playing it, I knew KimiNozo was wasted on an adult-exclusive game and hoped some observant Japanese perv would make an awesome anime series out of it. Well lo and behold they made one, which garnered an enormous cult following, briefly surpassing Cowboy Bebop as the most-illegally-downloaded anime!

So if you're like me and you're an uber-fan of Gal games, you can just go ahead and pick up Kimi ga Nozomu Eien now. No need to read any further, no need to spoil any of the surprises (and there are many). Just pay your money and get the game. You won't be sorry!

Everyone else, keep reading.

The hero's name is Takayuki, pronounced "tah-kah-you-key". He might have a crush on this really hot blue-haired girl named Mitsuki. It's hard to tell because he's a listless and depressed dweeb. Meanwhile, the excessively shy (to the point of annoyance) Haruka wants to date with him. Mitsuki has a crush on Takayuki, but since she's deadset on being a good friend, Mitsuki agrees to help set Haruka up on a date with Takayuki.

Cue the triangular love angst. Like most games of this type, it's a sequence of still pictures accompanied by full voice and music. Unlike most gal games, the music is FANTASTIC; it's so good I even bought the soundtrack. There's a lot of violin and piano due to its soap operatic nature, but the composition shows a lot more thought and insight than any other Gal game I've played.

SIDE-NOTE: This company's next game, Muv-Luv, had a kick-ass soundtrack too.

For what it is  a tale of three teenagers trying to work out their self-important love lives  the story's pretty good. I hate Haruka, but the combination of visuals, music, and dialogue made me actually care. I kept restoring saved games over and over to try and nab Mitsuki: that's more than I can say for most of these games.

Eventually, Takayuki always ended up with Haruka. That really pissed me off, but I was tired of replaying scenes over and over. Sometime after that romantic night, while on his way to an afternoon picnic with Haruka, Takayuki runs into Mitsuki (depressed, of course) and buys her a silver ring for her birthday. Yeah, it's moronic to buy presents for girls you're not dating, but Takayuki is the kind of person who tries to make everyone happy. So he stops to buy this ring, chats with Mitsuki for a bit, and then realizes he's late and runs off to meet Haruka.

And he finds the pavement covered in blood because Haruka's been hit by a bus. And now she's in a coma.

Fast-forward three years to Takayuki's apartment. He's in the shower, having sex with Mitsuki  and you get to choose the, uhm, "details". Three choices to make in a single scene  what a change from the prologue's one choice per fifteen minutes! 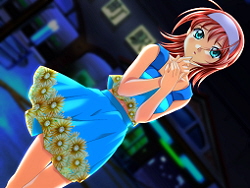 KimiNozo really comes alive in the second half. While the prologue always stuck Takayuki with Haruka, you can match him up with any of seven girls here, although some  like Haruka's really cute little sister Akane  are a lot tougher to catch than others. There are a lot of options and a lot of twists the story could take . . .

. . . and the writers keep twisting the knife in your heart. Just as you're getting used to shacking up with Mitsuki, just when you're all like "yeah I'm loving these new scenes every night", Akane  who you haven't seen in three years  calls you up on the phone. Haruka has woken up! Takayuki of course visits her, because he's a nice guy.

Then things get weird. Haruka doesn't realize three years have passed; she thinks she's still dating Takayuki! Unfortunately, she's still really weak and bedridden, so she can't really go anywhere. Out of concern for her health, Takayuki pretends to still be Haruka's boyfriend so that she won't lose her will to live and suffer relapse. What a nice guy.

The main story follows these three flawed characters through one agonizing scene after another. Takayuki tries to make everyone happy even though he knows he can't. Mitsuki sabotages her own happiness in an effort to help others. And naive Haruka doesn't think of anyone but herself. Throughout the story, you know the crap's gonna hit the fan, and part of the fun (although it's sometimes too painful to call "fun") is in trying your best to keep everyones' heads from exploding.

Unless you choose to bang the cute but bitchy waitress instead. The ability to completely avoid the main story is part of what makes Kimi ga Nozomu Eien so cool, although you'll miss out on a lot of heart-wrenching drama if you choose that path.

But at least it's your path to choose.

If you enjoyed this Kimi ga Nozomu Eien review, you're encouraged to discuss it with the author and with other members of the site's community. If you don't already have an HonestGamers account, you can sign up for one in a snap. Thank you for reading!

© 1998 - 2022 HonestGamers
None of the material contained within this site may be reproduced in any conceivable fashion without permission from the author(s) of said material. This site is not sponsored or endorsed by Nintendo, Sega, Sony, Microsoft, or any other such party. Kimi ga Nozomu Eien is a registered trademark of its copyright holder. This site makes no claim to Kimi ga Nozomu Eien, its characters, screenshots, artwork, music, or any intellectual property contained within. Opinions expressed on this site do not necessarily represent the opinion of site staff or sponsors. Staff and freelance reviews are typically written based on time spent with a retail review copy or review key for the game that is provided by its publisher.