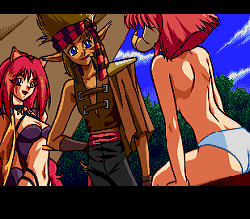 Welcome to the wonderful world of Westina, a lush planet inhabited by super-cute elves, cat-women, and goat-girls! The "Master Embryos", known to most as "seven succulent sorceresses", have governed the world for years, maintaining peace and order. Unfortunately, this peace was not to last! The dread "Quan Virus" infected these seven sexy leaders, draining the mercy from their minds and the humanity from their hearts. Now, the former champions of good are ravaging the lands, converting the planet's climate so that the Virus may prosper.

This world needs a hero! Fortunately, there are two. In Steam Hearts, you'll play as one of the nefarious outlaws that have magically escaped infection  either the masculine cat-boy Blondia Varady (nicknamed "Blow" for short), or his redheaded feline sister Falandia (nicknamed "Falla"). You'll then confront the Master Embryos . . . one by one. Fortunately, rather than simply kill the planet's former guardians, Blondia delivers the antidote necessary to cure their tainted bodies.

As with most shooters, the story has little effect on the action. For the most part, you'll simply fly your chosen character through the skies in a small and agile spaceship, destroying everything in sight, from kamikaze drones, to mechanical hornets that angrily follow you around the screen, to bullet-spewing cannon-toting soldiers. Every enemy in this game unloads gobs of bullets, coating the screen in a white glaze of war.

Although slow to start, Steam Hearts builds towards an exciting climax. For example, after cruising through an asteroid field, accompanied by soothing space lounge tunes, the music suddenly ramps up to 100 miles an hour, swarms of enemies surge forth, and lasers streak across the black space from off-screen battleships. This mid-level switch from rock dodging to all-out starfleet combat is both exciting and involving. This level tells a story; I only wish the game's other stages were so clever. 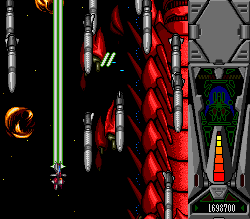 Steam Hearts only features two weapons, but they behave differently depending on your chosen character. For example, Blondia's laser is a fully-frontal, streaming ejaculation of carnage, while Falandia's laser spread-eagles diagonally in thin wisps of whitehot bliss. Toss in eight levels of weapon upgrades, a reasonable dose of powerups (shields, black hole missiles, or homing droids), and you've got a decent firepower potential despite the limited weapon selection.

As you penetrate further and further into the game, the foes can fight back quite fiercely, even on the easiest difficulty setting. The ore chasm, a rocky mining shaft filled with cannons and gatling turrets, is particularly harrowing. Steam Hearts dispenses with the entire idea of memorization, instead forcing the player to dodge volley after volley of bullets, with little room to maneuver (due to a MASSIVE hit-box). Fortunately, control is slick and stable, making it surprisingly easy for a skilled player to wind his way through even the tightest and most intricate streams of cannonfire.

When caught in a tight situation, tap the button for a quick Turbo Boost. This burst of Knight Rider speed is easily capable of sending you from one side of the screen to the other in a split second. Even at top speed, your craft remains easy to control  with just a bit of practice, I found myself blazing through enemy bombardments of lasers and cluster bombs! This Turbo Boost not only allows you to escape from tight spots, but it also lets the game throw an occasional ultra-fast curveball, without coming across as cheap or unfair.

The graphics are detailed and colorful. The fast-paced techno soundtrack keeps the blood flowing until the raging climax. However, the boss battles are where Steam Hearts blows its load. Each of the female leaders pilots an ornate mech, all equipped with elaborate weaponry. LayFang, the guardian of Ancient Westina, will launch blue homing beams and pelt you with bullets. Beat her down . . . and then she pulls out a REALLY long staff (it nearly spans the length of the screen!) which sends lasers streaking through the sky! Another boss briefly summons a black hole. The cool part is that, while dodging the antimatter bomb (tap that Turbo Boost button!), Blondia and Falandia scream: "Oh my god, what is that?!" "It's a black hole!" "Hit the speed, avoid it! Watch out!"

That kind of character reaction turns a potentially typical attack into a memorable event. Furthermore, each of the Master Embryos speak before the battle begins, adding a bit of drama to the whole affair.

And, once you've physically beaten down the boss, you'll have sex with her. 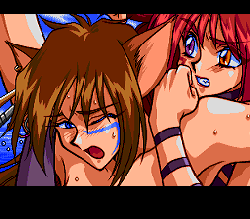 Yes  sex. The key to victory in Steam Hearts is coerced copulation. You remember how I mentioned that Blondia has the antidote to the deadly Quan Virus? Well, that antidote happens to be his sperm. So, once you've blown one of the frisky female leaders' mobile suits to bits, Falandia will subdue and molest the cutie (prepping her hormones for Blondia's arrival, no doubt) and then you'll be treated to a well-drawn cutscene depicting the sexual purification of the Master Embryo. It's for the good of Westina!

After the deed is done, the little lady turns back to the Path of Justice and helps you out (usually by providing information about the Virus). While most of the so-called goodies are cleverly obscured by hair, arms, and heart-speckled panties, this is pretty hardcore stuff in concept. Heads on the ground, buttocks in the air  I think you get the picture. Blondia risks his life to save the world . . . by having sex with anime babes.

I'm sure the designers would say something along the lines of "it's about love conquering violence", which is a load of bull. People who look deeper will probably find some misogynistic message behind the idea of a male physically subduing females, then sexually dominating them through non-consensual intercourse (in other words, rape). Some might even say that by providing attractive imagery of naked, nubile vixens, players are rewarded for engaging in this exploitive, caveman behavior.

Unfortunately, I really like looking at cute naked cat-girls. I guess that means I'm going to hell.

At their core, all shooters focus on blasting things to bits. Even titles with special gimmicks (like Giga Wing) usually end up glomming together into one huge puddle of wanton destruction. In a sea of shmups crammed with tricks, powerups, and incendiary gadgets, it takes a pretty strong hook to create lasting, vivid memories.

Steam Hearts features a hook so notoriously unforgettable that the game remains famous over a decade later. Sure, it contains some disturbing undertones, but as long as you've got a healthy mind and a desire for some decent action, it's not a bad catch. Besides, you can rationalize the heroes' distasteful actions with one simple motto: "It's for the good of Westina!" 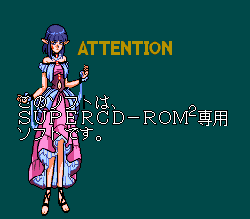 If you enjoyed this Steam Hearts review, you're encouraged to discuss it with the author and with other members of the site's community. If you don't already have an HonestGamers account, you can sign up for one in a snap. Thank you for reading!

© 1998 - 2022 HonestGamers
None of the material contained within this site may be reproduced in any conceivable fashion without permission from the author(s) of said material. This site is not sponsored or endorsed by Nintendo, Sega, Sony, Microsoft, or any other such party. Steam Hearts is a registered trademark of its copyright holder. This site makes no claim to Steam Hearts, its characters, screenshots, artwork, music, or any intellectual property contained within. Opinions expressed on this site do not necessarily represent the opinion of site staff or sponsors. Staff and freelance reviews are typically written based on time spent with a retail review copy or review key for the game that is provided by its publisher.