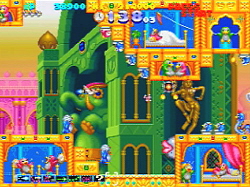 Straight from the arcades (if you live in Japan) to your home via the Sega Saturn (again, if you live in Japan) is Grad... no... Life For... no... hmm. It plays like Gradius, it has the same types of powerups as Life Force, but it's something quite different indeed. It's Sexy Parodius, the most risqué entry in Konami's self-parody series Parodius!

Like its serious-minded cousin Gradius, Sexy Parodius is a sidescrolling shoot-em-up that focuses more on creative designs than on slick gameplay (yep... the ship still moves really slowly). Unlike its predecessor, THIS time around you can pick from eight different protagonists! Not only does the Vic Viper make its grand return, but so does Gabriel, the castrated angelic pig! "Wait," you may say: "there weren't any flying pigs in Gradius!" Well, get used to it, because you'll be seeing a lot of strange things in this game.

Once you've chosen a valiant vigilante, it's time to fight injustice in the pastel-colored skies. At the beginning of each level, a traumatized denizen of this insanely freakish world will scurry to your "Help-for-Hire" business, seeking the aid of a superhero. One mission involves rescuing bunny girls from vicious penguins. On another superheroic quest, the Big Yellow Smiley Face asks for help: his smiles have been stolen and you must recover 300 of them!

Yes, the levels in this game not only involve safely navigating the terrain and putting down a vicious boss (be it a giant flying cob of corn or a naked tanuki that turns into a go-go dancer), but you must also accomplish a super-special mission objective: rescue 50 girls, massacre 20 teddy mice, and so on and so forth! To top it off, whether or not you fail or succeed determines the next mission you will face.

And to succeed at your mission, you will need supreme sexy power! As you fly along and blast flying sheep and women-in-bubble-baths to bits, various super-secret powerups will appear!

Powerup One! Big shiny bells of various color (familiar to fans of Stinger/Twinbee) grant you super-special but temporary powers such as laser beams or (my favorite) BIG, which bloats your onscreen size to triple and gives you invincibility, turning the Vic Viper into a menacing starcruiser or turning your flying pig into a Screen-Wiping Swine of Death (hereafter referred to as SWSD).

Powerup Two! Blue icons (familiar to fans of Gradius/Life Force) will destroy everything on the screen. Except they don't. They don't even destroy all of the weak onscreen enemies. In fact, you really can't count on these powerups at all.

Powerup Three! Yellow-orange icons (I call them yorange) add a level to your powerup gauge. Collect one and you can increase your speed (a necessity in this game since you move pretty damn slowly). Collect more and you can add weapons, missiles, or "option" helpers (basically a glowing ball of light that flies alongside you and shoots stuff). Collect SIX and you have access to the mighty OH! ability. What's the OH! ability? In big red letters, OH MY GOD! smears itself across the screen and you lose ALL of your powerups! Awesomeness.

Unfortunately, if you are shot or run into one of the freakish foes, not only are you set back in the level (yes, this is one of those "checkpoint shooters" you may have heard about), but you also lose ALL of your powerups. So you must do it all over again: increasing speed, acquiring weapons, and so on. And this sucks because at times the game is cheap: enemies will pop up from behind and slaughter you in one hit. A keen memory is a must if you want to finish this game -- well, if you expect to finish the game in any reasonable amount of lives, that is. Unlimited continues are provided so, with enough persistence, even a bumbling fool should be able to attain one of the multiple endings.

Unfortunately, the "bad" endings for each level are very bad. While a good ending might reveal a picture of sexy women in suggestive poses, the "YOU SUCK!" ending might show your character crying or, even worse, a 70-year-old hag in the nude. GROSS! That's certainly powerful motivation to practice hard and improve your character's techniques.

Each hero has slightly different abilities to be gained. Unfortunately, you'll be wasting your first two or three yellow powerups just to increase speed to a decent amount. Konami shooters have always been slooooooow, and this one is no exception. Fortunately, speed increases more quickly here than in their older, more familiar NES titles.

And those old NES shooters never looked this good. This is hardly breaking ground for 32-bit graphics (it's more like high-end 16-bit), but the gushing waterfalls and oodles upon oodles of bullets flying across the screen are nothing to be scoffed at! The Chinese level is filled with transparent purple haze as though it were an opium den -- and the Saturn isn't supposed to be able to handle transparencies! When you first set foot in the Sexy Parodius world, snow pours through the sky! ...then the sun comes out and you're flying over green meadows. This game doesn't make any sense -- AND IT DOESN'T NEED TO! It just needs to look cool, and it succeeds quite well at that.

And really, is there anything cooler than a well-animated Penguin boss wearing a toilet on its head? Well, is there? Of course there isn't! As it hops around the floor, flushing itself, bubbles and coins and little birdies (they must have been stuck in the plumbing) fly out of the Penguin's head.

Now that is just too damn funny. But not everyone will be amused.

"I never dreamed I would hear a rendition of Wagner so vile as this."

My friend Charles (a fan of classical music) found the soundtrack a bit... disturbing. Some of the melodies are genuinely cool remixes of famous Konami tunes: Castlevania, Goemon, and Gradius are all represented here. But most of the tunes are classical melodies performed in high-pitched carnival style. While some purists will be driven mad by three-ring circus organs performing Bach, I found the music to be not only catchy and hummable, but also genuinely well-performed! It takes skill to play the accordion -- don't let anyone else try to tell you otherwise!

The Saturn is filled to the brim with far better-playing titles, many of which are also extremely creative. And for its rarity, this game really doesn't stack up. However, Sexy Parodius is definitely a keeper for fans of insanity. Modern-era shooter fans will want to look elsewhere for their manic bullet action, but old-school gamers who regularly import Saturn games and appreciate cartoon eroticism should be pleased.

If you enjoyed this Sexy Parodius review, you're encouraged to discuss it with the author and with other members of the site's community. If you don't already have an HonestGamers account, you can sign up for one in a snap. Thank you for reading!

© 1998-2020 HonestGamers
None of the material contained within this site may be reproduced in any conceivable fashion without permission from the author(s) of said material. This site is not sponsored or endorsed by Nintendo, Sega, Sony, Microsoft, or any other such party. Sexy Parodius is a registered trademark of its copyright holder. This site makes no claim to Sexy Parodius, its characters, screenshots, artwork, music, or any intellectual property contained within. Opinions expressed on this site do not necessarily represent the opinion of site staff or sponsors. Staff and freelance reviews are typically written based on time spent with a retail review copy or review key for the game that is provided by its publisher.