Thrilling? Intense? Breathtaking? Expect a gushing review if you encounter these words, as they are intended for games that are special, that are timeless, that burrow deep into your soul. But what if the word is... comfortable? Not exactly a word I would normally use, but one that perfectly fits Shantae and the Seven Sirens.

Comfortable. Start the game up, get past the intro, and you will soon be controlling your half-genie hero in a familiar side-scrolling environment. Jump, crawl, use magical spells, and above all else whip your hair around to strike at enemies. It all feels exactly like you've done before. After all, this is the fifth game in the series, and the third on modern consoles. But, dagnabbit, there's a reason it's still the same, it's already practically perfect! Your jump is just large enough to give you high precision and degree of movement but short enough to still make platforming fun. Your hair attack is just fast enough to allow for a satisfying rapidfire assault on your foes while weak enough to not break the game. The magic and extra items are useful enough that you can have fun experimenting, but weak enough that you aren't forced into a certain style. Jump, jump, jump, duck, whipwhipwhipwhipwhip. Everything is perfectly in tune.

Suffice to say, when I envision the way a character in an action platformer SHOULD move in a game, Shantae is one of the first to pop into my head. Controlling a character who moves exactly the way you want her to is fun enough in its own right, regardless of the content surrounding it. 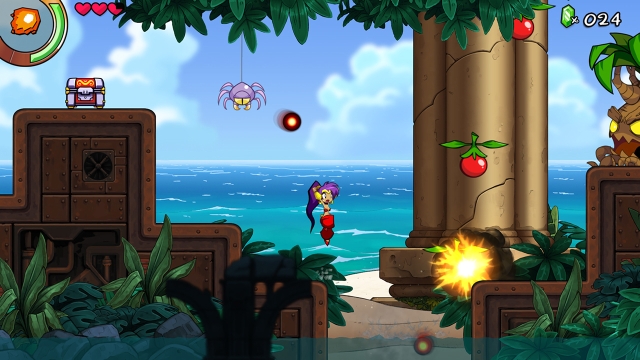 Which is a good thing, because the design of the game surrounding this perfect control is, well, comfortably adequate. It's a Zelda-esque Metroidvania, in which there's an overarching world, but with a clear differentiation between "overworld" and "dungeon" (ie, large segments of the map meant to be visited only once that reward you with an upgrade and a boss fight). There's nothing particularly inspiring about the map, no huge vistas or winding paths or clever hidden shortcuts or what have you. Oh, each area is unique, especially the "dungeon" segments. And it keeps you guessing when you will need to interact with elements and areas you can't reach yet like a good Metroidvania should. But it's more like a perfunctory backdrop rather than the highlight of a game as in, well, Metroid or 'Vania. It's there, it's good, but it's not special. Just good enough. Same with the room to room levels design. Some puzzles, some gauntlets, some corridors, lots of jumping. A good backdrop, but nothing earth-shattering.

Nor is the game challenging. Well, it's not like the series is about providing a brutal experience in the first place, but there was really only one time I felt any kind of stress. In fairness, you can regulate this. Basically, the problem is the game just throws loads of restorative items at you that can be stored and used at any time. There are enough minor enemies to whittle your health down, and enough decent minibosses or stronger mooks that you'll have to slow down and pay attention, but the health items make them irrelevant. You can create a self-made challenge by ignoring all those items if you want, but the base game itself is easy. And even if you do try to impose a challenge yourself, it just brings it to the realm of satisfying, nothing crippling at all.

So yeah, comfortable. It feels so good to play, but the rest of the game is just... there. Yes, transformations are thankfully streamlined compared to Half-Genie Hero, making the game feel even better to play than before. Some of the regions are cool and all, but mostly the experience is adequate. Many of the bosses (especially the final boss) are great to play against, but don't create an extremely satisfying challenge. Often this would be kill a game, but... the game is fun! Whip your hair! Jump around! Fling those pike balls! Climb up the wall! Dance!

And it looks good, the fancy high-res sprites from Half-Genie Hero return along with brand new fully animated cutscenes. The humor is just as top notch as usual, an irreverent nonsensical plot dripping in sarcasm, lampshade hanging, and absurdist dialogue. The music fits just as perfectly as it did before. In many ways, this is the culmination of Shantae. The fancy graphics of HGH meets the smooth gameplay of Pirate's Curse. The mission-based Metroidvania setup evolved to a standardized format. New characters fitting in and blending with some old favorites. All your favorite transformations and movements without the clunky dance mechanic, while still leaving the dancing in the game via a different format for nostalgia's sake. Seriously, what more could you want?

I'm glad I played this game, I'm glad it exists. Shantae is just so fun to play. The only question is, what now? It feels like we've reached the end of this format, brought it as far as it can go. The moment to moment gameplay is as smooth as ever, the writing is as funny as ever, the presentation is as pretty as ever, but the full experience is starting to feel a bit too standard. I fear the series is on the cusp of undergoing Megamanization, an awesome concept that eventually bogs itself down by failing to innovate. So what next? 3D? A more complex Metroidvania approach? A shakeup in combat? All very risky... But as good as comfort is, it can lead to lethargy and boredom, and thus is a risky path of its own. Perhaps it is time for Shantae to become uncomfortable.

If you enjoyed this Shantae and the Seven Sirens review, you're encouraged to discuss it with the author and with other members of the site's community. If you don't already have an HonestGamers account, you can sign up for one in a snap. Thank you for reading!

© 1998-2020 HonestGamers
None of the material contained within this site may be reproduced in any conceivable fashion without permission from the author(s) of said material. This site is not sponsored or endorsed by Nintendo, Sega, Sony, Microsoft, or any other such party. Shantae and the Seven Sirens is a registered trademark of its copyright holder. This site makes no claim to Shantae and the Seven Sirens, its characters, screenshots, artwork, music, or any intellectual property contained within. Opinions expressed on this site do not necessarily represent the opinion of site staff or sponsors. Staff and freelance reviews are typically written based on time spent with a retail review copy or review key for the game that is provided by its publisher.