I loved Super Monkey Ball on the Gamecube. I remember the pleasurable frustration of Level 7 on Expert and how it felt to finally eke past it one day, and yet eventually being able to blow past it like it was Level 1. I remember the first time (ok, honestly, probably the only time) I beat Expert without a continue after probably hundreds of tries and finally receiving my reward of playing the extra unlockable levels, something that truly felt like a huge accomplishment. I remember the shortcuts, the warp goals, all of it. And I remember the sequel being a disappointment, killing the arcade challenge in favor of playing the levels one at a time, although at least the levels themselves were fun! And then I remember never getting around to Banana Blitz when I had the Wii, with it always managing to slip off my radar.

You would think the concept is hard to screw up. You control a monkey in a ball. Actually, scratch that, you control the tilt of the ground underneath your simian friend. Press up on the control stick, the ground tilts downward, and the ball starts rolling. Keep tilting until the monkey hits the goal, move on to the next. And don't fall off the stage! Maybe collect some bananas along the way, and 20 of them will give you an extra life. It's a simple concept, but challenging to master. The tilt means you have to worry about momentum, and learning to control your speed while spiraling downhill or learning how to stop your momentum suddenly is key. Simple to learn, difficult to master, perfect for that arcade feeling. 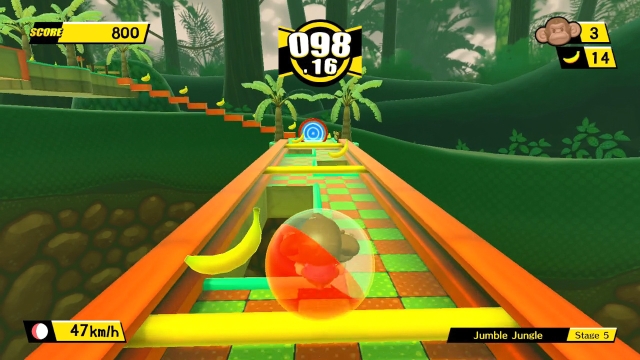 So what went wrong? To start, there are only 82 levels in this game, compared to 118 for the first game. That alone isn't horrible, but the problem is the challenge really only starts around level 30 or 40 or so. Before that, the game is mind-numbingly easy, to the point where you almost have to try to lose. The paths have fences... fences! How are you supposed to fall off the path if there's a fence in the way?? OSHA may be happy, but safety goes hand in hand with boring. You'll march through the first few worlds with nary a death, with your only minor threat being the generous timer counting down. But even then, yeah, no problem. Oh, things will pick up, and the last few worlds are suitably painful, but compared to the dozens upon dozens of challenges of the first game, it feels a bit barren.

But I would also argue that those rarer late game challenges also felt cheaper. Perhaps it's the control. The game was played with motion controls on the Wii, but can be done with the analog stick on the Switch. But I think the Switch's analog stick is just less sensitive than the GC one, so it feels like you have less control. Giving juusst the right amount of tilt to get your momentum going in the right direction feels harder these days. Hey, maybe it's just me, maybe I'm just getting older, but I could ride on rails 1/5 the size of my ball on the GC, and yet seemingly simpler challenges now see me fall to my doom.

Also, I blame jumping. Yes, no longer are you just tilting the screen to move around, now you can jump. So, it's a platformer now, but the game isn't designed for platforming! The largest issue is that the camera is near the ground and way too close to you (compared to zoomed out and slightly above you in most 3D platformers). This gives you no depth perception, making jumps across gaps feel like a matter of luck, especially in a momentum-based game where your speed (and thus, length of jump) is highly variable compared to a typical platformer. So if you're jumping over obstacles like bumpers or balls, fine, but jumping from platform to platform? Just an unpleasant feeling all around.

Speaking of which... well, let's be honest, Monkey Ball's camera has always been terrible. It simply can't keep up with any sharp movements, and will circle around your monkey as it tries to figure out which way is forward. And you have absolutely no control over it. This camera didn't matter too much in the first game when you stopped on a dime and paused to get your bearings straight, but the jump compounds the issue. One level has you jump from a rail to another rail at a 90 degree angle, and the camera will never let you line them up correctly. So you have to guess. With no depth perception. See the problem?

Meanwhile, the game also introduced boss battles. But they're just awful, no getting around it. Because of the tilt mechanic, you don't have the precision for an exciting platformer-based battle. So instead it feels almost random at times. You learn the few patterns readily enough, and then hope for the best as you try to tilt and jump your way to the obvious weak spot. Usually it's no problem, but the camera (again...) makes it hard to tell where the boundaries of the level are, so if you're focusing on attack you may just be opening yourself up to getting thrown out if you build too much momentum. So random frustration mixed with simplistic patterns and shaky execution means it just wasn't a worthwhile addition to this

Seventeen years ago, I wanted to master these levels. Now I just wanted to get through them. Remember what I said about level 7 in the original? It wasn't enough to have a lucky run once and finish it, I needed to become one with the level. It needed to be an instinct to get through, something I could do consistently every time. The initial hill, the final curvy thin line, all became second nature. That's how the game is meant to be played. But given how frustrating the controls and camera were here, I just wanted it over with. And dreading a challenge rather than relishing it is a death knell for an arcade game like this. If Sega wanted to see if there was any life left in the Monkey Ball franchise, they sure chose the wrong game to remaster.
2/5

If you enjoyed this Super Monkey Ball: Banana Blitz HD review, you're encouraged to discuss it with the author and with other members of the site's community. If you don't already have an HonestGamers account, you can sign up for one in a snap. Thank you for reading!

© 1998-2020 HonestGamers
None of the material contained within this site may be reproduced in any conceivable fashion without permission from the author(s) of said material. This site is not sponsored or endorsed by Nintendo, Sega, Sony, Microsoft, or any other such party. Super Monkey Ball: Banana Blitz HD is a registered trademark of its copyright holder. This site makes no claim to Super Monkey Ball: Banana Blitz HD, its characters, screenshots, artwork, music, or any intellectual property contained within. Opinions expressed on this site do not necessarily represent the opinion of site staff or sponsors. Staff and freelance reviews are typically written based on time spent with a retail review copy or review key for the game that is provided by its publisher.