Pikuniku was not ranked very high on my "to play" list, I must admit. And then they decided to put it on sale for $1, putting it squarely in the impulse buy range. And really, it's a great impulse purchase. Not special enough to be worth going out of your way for it, not expensive enough to hurt, and short enough that it's over before you feel like dropping it. OK, so maybe that's a bit too snarky. Seriously, it's not horrible. Still snarky? Fine, not bad.

One simple picture is enough to tell you where the appeal (or lack thereof) of this game lies. It's art style is just... weird. It all looks like it was done in MSPaint, and there's no telling what these characters are supposed to be. You play as a so-called monster - consisting only of a red oval with eyes and some spindly legs - roaming around a world filled with pear shaped morons and leaf-shaped imbeciles and a dumb badguy who's shape is oddly disturbing. And the game is just as nonsensical as these designs. Everyone has the intelligence of Ralph Wiggum, and flaunts it at every occasion. And on your adventures, you'll face off against a possessed toaster, perform a dance-off against a cloud-shaped robot, and roll an engorged worm around, all to defeat the evil boss living in a volcano. If absurdist humor and ironic low-quality art is your thing, then this has it in spades. 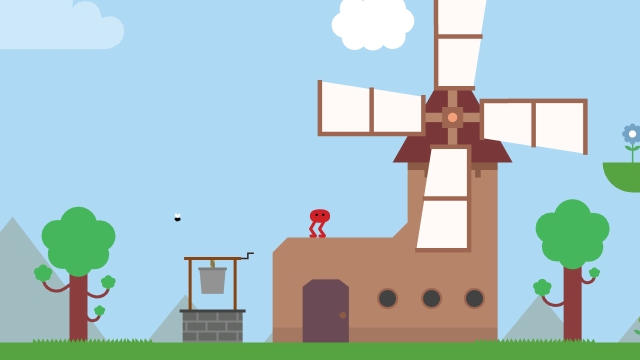 But it's not just the art and characters, it's the animation as well. Those spindly legs on the oval manage to throw themselves out there in every which direction, turning even the simple act of walking into a comedic animation. Jump off a cliff and watch the legs flail about as you tumble down. Or find the arms powerup to add two completely useless appendages and double the fun! Meanwhile, all those bizarre characters can be pushed around or tossed in the air, as can various rocks and acorns and anything else that moves. This is shown most clearly in the basketball minigame, where you face off against one of those pears in a short side-scrolling game in which you try to kick the ball into the goal... or just kick your opponent around the screen, whatever you prefer.

If that's your thing, if you like smiling at absurd dialog and bizarre animations and a purposefully low key world, then this is well worth investigating further. If you hate that aesthetic, then you might as well leave now. But if you're ambivalent, well, I'm afraid more ambivalence is in your future, because there's not much else to say for or against the title.

The gameplay and design itself is, frankly, nothing special, with no focus on much of anything at all other than the presentation. Your little red oval feels somewhat floaty to control, and the physics-based aspect makes it occasionally difficult to get him to do what you want to do. But since nothing is too challenging and there's no harsh penalty for failure, it doesn't feel too punishing.

There's a few (but only a few) challenging platforming segments, very little combat (and what is there is pretty easy), some minor puzzles, and mostly just light exploration. So just walk and jump around, looking for your next mission. Some are pretty obvious, some might require a tiny puzzle or two. Occasionally you'll end up in a lengthy platforming segment, jumping and swinging past spikes and the like. You can also search around for some optional secrets which reward you with trophies, or perhaps a new hat to wear, or a little animation of a bug doing something weird. But ultimately, you're on a mission to take down a pink blob in a top hat, which will include some basic level design like sneaking through a series of air vents or whatever. Nothing here is groundbreaking, nothing screams brilliant, nothing even feels essential. But it should hold your interest for a couple hours or so.

And since it's a short game, 2-3 hours is all you need. One might argue that this is a downside, but, honestly, that's better for a game like this. After all, the appeal is in the presentation, and the presentation is deliberately juvenile. I don't mean that as a pejorative, but simply that a longer game does not bring about greater depth or greater appreciation of the world. So the game's brevity only means it ends before the novelty of the presentation completely wears off, and before you're left staring at only the thinness of the content. You move through 6 or so different areas, do a small amount of backtracking, save the day, and then put the game away and never worry about it again. Sure, there's some minor secrets you can seek out if you want to in order to 100% it, and there is a co-op mode of you want, but that's about it. An epic, this is not.

But that's ok for an impulse buy. It was cheap, it was short, and it was unique. It was also simplistic and without any engaging hook, gameplay-wise (albeit no real flaws either). So while I don't regret playing it, Pikuniku still fails to provide a lasting impression. And, of course, it's no longer only $1, so where does that leave you? Honestly, seeing it in motion for a minute or so is enough to tell you if you'll find any value here. It's enough to tell you if you'll like the presentation, and I've already warned you that there's only a shallow yet competent game behind it. Take that as you will.

If you enjoyed this Pikuniku review, you're encouraged to discuss it with the author and with other members of the site's community. If you don't already have an HonestGamers account, you can sign up for one in a snap. Thank you for reading!

© 1998-2020 HonestGamers
None of the material contained within this site may be reproduced in any conceivable fashion without permission from the author(s) of said material. This site is not sponsored or endorsed by Nintendo, Sega, Sony, Microsoft, or any other such party. Pikuniku is a registered trademark of its copyright holder. This site makes no claim to Pikuniku, its characters, screenshots, artwork, music, or any intellectual property contained within. Opinions expressed on this site do not necessarily represent the opinion of site staff or sponsors. Staff and freelance reviews are typically written based on time spent with a retail review copy or review key for the game that is provided by its publisher.