Eleven Mega Man games, 8 in the MMX series, 4 MM Zero contributions, 2 MM ZX, and countless clones and spinoffs. And in the middle of them all is Inti Creates, who not only made a bunch of these for Capcom but have also published plenty on their own, including the Gunvolt series. With all of these action-platformers under their belt, many with similar mechanics, how can you possibly make a new game stand out?

By forsaking the traditional challenge ideal and just aiming to be cool instead.

Start with the basics. Copen (otherwise known as iX) can jump, shoot, and dash. Oh, and wall jumping too. After defeating a boss, he gains its powers as a special weapon, and of course each boss is weak to at least one other weapon. It's just like Mega Man X so far.

Except Copen can dash in the air. And, with just a press of the D-pad, angle the dash up or down. That's a little more mobility then little old X, right? Oh, but wait, we're not done yet. Copen can dash multiple times in the air, and a single air dash will take you all the way across the screen. Ok, a lot more mobility than X. Ah, you say, there's a downside here. Given the speed and length of this dash, you'll probably ram into an enemy along the way and start losing health; that sounds bad. Well, you will ram a baddie, but that's what you're supposed to do! You bounce off enemies, you don't get hurt by them. And by rammin' them, they get "tagged", and then every gunshot is autotargeted on said enemy. Fire away; no need to aim!

That sounds easy, huh? Oh, it gets better. The enemy hits you, but you take no damage. Instead, you lose two "bullits", which can also be used to dash around. Ah, so it's a tradeoff being movement and getting hit? Not much, because all you have to do to get those bullits back is press down. Press it as often as you want. So it's quite possible to be smacked around and never, ever lose health. All while automatically hitting the enemy with every strike. The game practically plays itself! 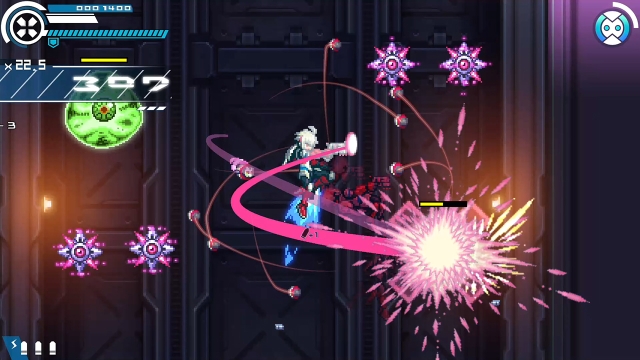 Although it doesn't play itself for very long. The game is about the length of a typical Mega Man game. You know the drill: introductory stage, the 8 robot bosses (or whatever), then the final showdown with ~4 separate stages. It's the typical 2-hour experience. All with no challenge.

Bold move, Inti Creates. Does it pay off?

Surprisingly... it does! It's all about that dash move, moving blazing fast through the air and colliding with enemies. This is no longer a jump and shoot experience like the Mega Mans of yore, it's now a dashing platformer game where speed and fluidity of movement is key. Enemies are no longer obstacles to avoid and defeat; they are beacons to aim at. See, hitting the enemy gets your bullit back, allowing you to dash again. If you want to speed through things, you hit the enemy, bounce off, and dash again. Or you can pause, slowly float down (an automatic action), wipe out the enemy, and then dash again. Either way, you're speeding through, and there's a satisfying flow when you can get through half the level without touching the ground. You know that wonderful moment in Sonic when you get to full speed and then start zipping around the levels and doing loop de loops and stuff? Well, it's kinda like that. Except unlike with the blue hedgehog, you're actually in control as you fly from one obstacle to the next.

It looks cool and it feels cool, and the game is clearly designed around this concept. While the possibility of death is low thanks to being able to tank your hits with these bullits, you still have incentive to avoid attacks in order to build up your kudos. Every enemy you kill gains you more of these kudos, but you lose them if you get hit a certain number of times or use a save point. And your kudos multiply if you string together multiple kills without ever touching the ground (thus incentivizing you to use your dash mechanic as much as possible). Meanwhile, all of this is because you are being followed around by a small flying robot, and if you can earn enough kudos she transforms into a cute green-haired winged robogirl pop-star who strengthens you with the power of her song as you fight to save the adorable little precocious children!

...That has got to be the most anime sentence I have ever written. What am I even doing with my life? 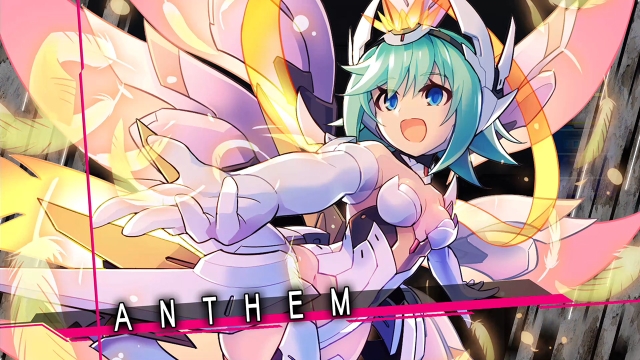 OK, regardless of your feelings on the anime aesthetic, it still feels good. And, more importantly, it succeeds in that question I asked in the beginning, about making yet another action platformer stand out. You are no longer performing the classic Mega Man X actions of dash, jump, shoot. Now, it's air-dash, hover, air-dash, hover, air-dash. Or just air-dash air-dash air-dash if you want. You CAN play the traditional MM way, but it's boring. Once you're flying around the screen, it's a brand new experience, while still maintaining a familiar feel that one would expect from ex-Mega Man folks. Mission accomplished!

...Mostly. Don't get me wrong, it's stylish, it's fun, it's well crafted, it's a new twist on the Mega Man formula. It's also short and doesn't break far enough away from the formula. Length-wise, it just doesn't feel like enough space to fully flesh out the air dash experience. There's one vertical corridor that can only be climbed by zig-zagging your air dashes against enemies. That's cool, but I wish there were more experiences like that, but sadly none come to mind. And the "steal a boss' weapon to use against a different boss in a rock-paper-scissors fashion"? That's been DONE, do something different! But more importantly, bosses themselves were rather stale, mostly because they DIDN'T rely on this new mechanic. When most boss fights only take up a single screen, it's hard to air-dash around, after all. So it's just a matter of tagging and shooting and banking your bullits and absorbing the damage when they do their special move and killing them afterwards. Sure, it's a relatively small amount of content in the game, but it's a critical miss.

I guess my final verdict is that I like the game, but I appreciate it more than I like it. It's GOOD that Inti Creates isn't just making a Mega Man clone and calling it a day. It's good that they re-thought the formula to come up with something unique, come up with a movement system that feels fresh and fun. And they molded it into a very pretty package with excellent art and visuals and it all meshes together seamlessly when you're dashing around. I like that! But it's length and inability to push that concept further hold the game back from being a completely satisfying experience. I'm glad I played it, I enjoyed what I had, but I don't think I'd want another one without pushing the envelope even further.

If you enjoyed this Gunvolt Chronicles: Luminous Avenger iX review, you're encouraged to discuss it with the author and with other members of the site's community. If you don't already have an HonestGamers account, you can sign up for one in a snap. Thank you for reading!

© 1998-2020 HonestGamers
None of the material contained within this site may be reproduced in any conceivable fashion without permission from the author(s) of said material. This site is not sponsored or endorsed by Nintendo, Sega, Sony, Microsoft, or any other such party. Gunvolt Chronicles: Luminous Avenger iX is a registered trademark of its copyright holder. This site makes no claim to Gunvolt Chronicles: Luminous Avenger iX, its characters, screenshots, artwork, music, or any intellectual property contained within. Opinions expressed on this site do not necessarily represent the opinion of site staff or sponsors. Staff and freelance reviews are typically written based on time spent with a retail review copy or review key for the game that is provided by its publisher.