How do you categorize Luigi's Mansion? It's not a platformer, since he can't jump. It's not a survival or horror game despite its setting, since it's not scary or all that difficult. It doesn't really fit as an epic adventure since it's so contained within a small space. It's too slow moving to be an action game, and too much action to be a puzzle game. It just doesn't seem to fit into anything. Ultimately, it doesn't really matter I suppose, but that lack of fit is what drove me to the game to begin with. It's a unique game, and worth checking out just for that.

The basic structure is intuitive enough. The premise is that the Mario crew decided to go on vacation to a fancy hotel, only to discover that it was all a ruse by some ghosts to capture them all. Fortunately, Luigi is smart enough to escape, grab his proton pa... uh, vacuum cleaner/flashlight combo, and can thus go about busting ghosts to save his bro. Unfortunately, this hotel only has one elevator, and the ghosts stole all the buttons on it. So you must clear the hotel, floor by floor, and fight the boss on each floor to grab a new elevator button in order to advance. Of course, this is a Nintendo game, so the "hotel" consists of an absurd number of absurdier-themed floors like an Egyptian floor and a pirate floor and a magic floor, etc. Realism dies in favor of fun, so the basic idea of 15+ themed levels in the game sounds pretty good.

But the way the game plays is completely unique. It's a fixed camera, but with a view like a TV show (with no 4th wall) rather than the typical top-down or isometric view. The fixed camera and hotel setting means there are relatively small rooms, so don't expect fast-paced movement or agility in this game. Instead, it's about fully exploring the confined space around you. With a fixed camera, the right analog stick is to control Luigi's orientation, leading to a duel-analog control. This is because the direction the vacuum cleaner is pointing is critical for how you interact with everything, from being able to pick up the corners of cloth and rip them off stuff to aiming your plunger-gun (a new adaptation to his contraption) to sucking up ghosts. 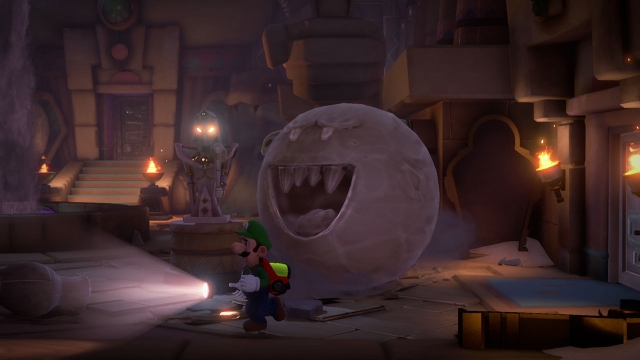 This ghost-sucking ends up being your primary source of action in the game. On a basic level, you must stun them with a flashlight, then attempt to "reel them in" with a vacuum cleaner, or at least getting them stuck enough that you can start slamming them into the ground. Some ghosts are more challenging, of course, requiring you to remove an obstacle to them getting stunned or some other mini-puzzle. It seems like a reasonably fun idea, but the fixed camera angle and duel analog approach can make it very difficult to control what you're doing. It's hard to see exactly where you're aiming, and hard to get the opposite angle when trying to suck up ghosts. But honestly, it's not a huge deal, since the vast majority of the ghosts are easy enough to grab and there's health aplenty. Your slam move knocks them out quickly once you get them hooked, and there's a decent amount of leeway in how much time you have to suck them up. Likewise, when you have to fire your plunger at the ghosts or an object, the game helps by snapping your aim in the right location once you get close. So the perspective challenge is mostly alleviated, well, until you get to the final boss. I think I won that one by pure luck... Still, it's not bad.

It's not particularly great though, or at least the basic enemies aren't. Instead, the beauty of the combat comes from the boss fights, which - in typical Nintendo fashion - tend to be more puzzle-based than action oriented. Each boss ghost is a fun caricature of a maid or janitor or chef or... Egyptian princess or pirate shark or anything you want. And for each one, you must find out how to stun them, and there's a surprisingly large number of different combinations for what to do. So while basic ghost combat is somewhat weak, boss fights are generally great. There's a lot of character and, well, just a lot of them in general.

Besides ghostbusting, though, the main draw of the gameplay is exploring every nook of the hotel. Naturally, given the cramped space, exploration isn't about seeing new areas or maze-like structures, but rather interacting with these dense rooms. Practically everything can be sucked up or blown around, and trash cans and toilets can be investigated, usually netting you some cash. Beyond cash, each floor also has 6 gems you can find, many of which require serious observation skills. Maybe a secret is hidden on the transparent "fourth wall", with only a tiny glimmer of a reflection in a mirror to tell you about it. Or perhaps you'll see a few loose bricks in the wall, which can be taken out with your vacuum to make the wall crumble down. Sure, there's no real in-game rewards for either the cash or the gems, but it gives you something else to do if you're enjoying the game. And it gives you a reason to constantly interact with everything you see.

Will you want to interact with everything? The game is interesting enough to play, but perhaps the overall experience is what matters the most. The game looks pretty, but the animation is undoubtedly among the best you'll see on the Switch, or perhaps any videogame. It's cartoonish excellence, a 3D representation of some of the classic film and television 2D animation. The way the ghosts wriggle to escape the vacuum, or Luigi's constant fear and surprise showing in the way he reacts and moves around. Bosses are all melodramatic, both in afterlife and in death. And everything, EVERYTHING can be interacted with. Vacuum up trash, rubber ducks, watermelons, Toad, whatever you want. Watch your plunger bounce off walls. Suck out the pin on a fire extinguisher and watch it go wild, WALL-E style. It almost seems like you're watching a movie rather than playing a game with how much fun the developers had with cramming details into everything.

Of course, a movie is 2 hours, while this game is around 15. And watching a silly prop pop out of a dresser door to cause Luigi to stiffen and shuffle about may be fun once, but it certainly can't sustain a game of that length. Thankfully, the wide variety of levels and bosses helps to keep one entertained and the animations fresh. You're only going to get an overwhelming amount of foliage in the conservatory level, for example. The fact that you get variety in puzzles/bosses and variety in animation manages to keep the game feeling fresh throughout the entire experience. And honestly, I think it's just about the perfect length. I didn't get tired of the repetition, but I didn't end up feeling unsatisfied or wanting more. It ended right when it needed to.

Remember what I said about not being able to easily categorize this game? It's not a trivial comment, as the uniqueness plays a major role in how you'll rate it. It's okay-ish as an action game, pretty good as a puzzle game, and is fantastic if you desire to simply experience the animation. The end result is somewhere in between. The smartest thing done here is to ditch the mansion theme and go with a hotel, allowing a ton of variety while still providing a veneer of continuity in the building. That variety helps elevate both the atmosphere and the game design itself, making the final unique little package quite pleasant.
4/5

If you enjoyed this Luigis Mansion 3 review, you're encouraged to discuss it with the author and with other members of the site's community. If you don't already have an HonestGamers account, you can sign up for one in a snap. Thank you for reading!

© 1998-2020 HonestGamers
None of the material contained within this site may be reproduced in any conceivable fashion without permission from the author(s) of said material. This site is not sponsored or endorsed by Nintendo, Sega, Sony, Microsoft, or any other such party. Luigis Mansion 3 is a registered trademark of its copyright holder. This site makes no claim to Luigis Mansion 3, its characters, screenshots, artwork, music, or any intellectual property contained within. Opinions expressed on this site do not necessarily represent the opinion of site staff or sponsors. Staff and freelance reviews are typically written based on time spent with a retail review copy or review key for the game that is provided by its publisher.