Breath of the Wild took the Zelda franchise to unprecedented heights. it's the most critically acclaimed Zelda since Ocarina of Time, and by far the best selling of the series. Returning to the franchise's NES roots and expanding it to a massive, nonlinear, challenging experience brought a whole new perspective on what it meant to be a Zelda game, a risky move that paid off enormously well. So, naturally, Nintendo decided to follow it up with a Zelda game that is as complete an opposite of Breath of the Wild in every single way.

OK, it's not as crazy a thought as I insinuated; Link's Awakening is a remake of a beloved Game Boy game, and it was clear from the beginning that this was not meant to replace BOTW. I just find it funny that, even if the game itself felt fresh and awesome for its time, LA was the first of the highly rigid and structured, purely linear Zelda experiences. One might have thought we could have added something to this remake, perhaps expand and open up the overworld in appreciation of its rediscovered roots, but no, this is pretty darn close to a 1:1 remake. And again, the game is beloved, so I can kind of understand the reasoning behind it.

But it brings up a whole new question. Sure, we can say games are timeless, but are they really $60 worth of timeless? Even if LA was phenomenal for its time and hardware (which it was), would we say it can compete with what's available today? People will have differing opinions on that, so believe what you like. Me, I can't help feeling that this remake is just a little too... basic.

Make no mistake, the original Link's Awakening was a fantastic Game Boy game. Its design was a hybrid of the more puzzle-esque approach of LttP combined with the gridlike maze of the original Zelda, but all set on a new island called Koholint. After getting shipwrecked there, Link learns his only hope of leaving is to awaken the Windfish which is being plagued by nightmares, although all is not what it seemed. This unique plot for the series gives it much of its charm, as Koholint is just weird - there's Mario characters and a perpetually flying rooster and mermaids and all sorts of stuff. The development team was clearly not concerned with making an epic high fantasy story, so the feeling of the game is basically one of whimsy. Sure, the structure is what became standard Zelda: do a mission to open a dungeon, get the item in the dungeon, use the item to solve new puzzles to reach the boss, then use the item to open up a new area of the overworld and repeat the process. But the individual pieces of the structure are fun enough. Most notably, you can put any items you have on the A and B buttons, which can occasionally lead to interesting possibilities. And by interesting possibilities, I mean pressing "bomb" and "arrow" buttons simultaneously to create bomb arrows! Long range missiles in a Zelda game! That alone makes this game awesome.

And so now it's a Switch "remake." Naturally, everything is in 3D now, using a fixed overhead camera and turning the visual style to a toy-like appearance (befitting the whimsical approach of the game as a whole, I guess). Improved music and sound effects too, of course. And there's a few obvious quality of life changes, most notably fixing several items (sword, shield, bracelet, boots) as permanently equipped, which means no more frustratingly swapping things in and out. Oh, and the overworld no longer has discrete screens that you have to scroll into, it's all a seamless world (while still looking like a grid-like system, of course). Add in a few extra bottles and heart containers and a revamped minigame or two, and that's about it. Seriously. 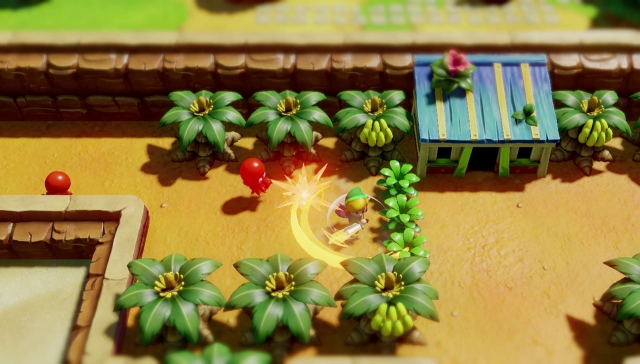 Frankly, that's the game's biggest problem: the core game still feels like it belongs on a 1994 Game Boy. Take the dungeons for example. They may have felt fresh and fun 25 years ago, but here they just feel small. In the first few dungeons, they seemed to end just when I was getting warmed up to them, making the experience feel incomplete. Sure, the last two were meaty, but ONLY the last two. The rest felt shorter than they should be. Perhaps part of the problem is a supposed quality-of-life improvement: the map that you can pull up and look at any time you like. On the GB, it only showed each room as a black square, but here all the details of the room are available to see. There's no problem tracing your route or seeing what roadblocks are in your path, and you can easily trace a path through even the areas you haven't visited yet. So there's no way to get lost, and no surprises that await you once you pick up the dungeon map.

This simplicity extends to the overworld. The original is only 16x16 screens, and each screen is only 8x8 tiles. An understandable size for the Game Boy, but this is downright tiny by modern standards. And again, arguably the quality-of-life improvement just made it worse; because each screen is not individually scrolled to, it FEELS even smaller now by not being 196 discrete locations. I can understand the reason for the change, but it definitely clashes with the decision to keep the overworld as-is and not redesign it to be larger and more complete. Even worse, many of these 196 screens are taken up on large sections that have a single use to the game and are never revisited, such as Richard's castle or the massive raft ride. So there's even less to explore than one might think.

The game is also even easier than the original. Originally, there was a max of 14 hearts, now there are 20. Originally you could get one bonus medicine that healed you when you die; now there are three bottles that you can capture fairies with in addition to that medicine. And originally, trying to control Link on that gray brick while viewing that tiny monochromatic screen was kinda difficult, and so the game compensated for that. Because the rooms were small, Link's sword was relatively huge for the space and easy to hit stuff, bosses had little recoil so it was easy to spam attacks, and regular enemies went down in a couple hits. All those things are still true, even though we have much better control and a much bigger screen to play with. The end result is that I was never in fear of dying throughout the entire game. Even the final boss posed zero challenge whatsoever. In fairness, there is a "hero" mode that eliminates recovery hearts and makes the game more challenging. And you can also impose your own restrictions if you want like not picking up heart containers or bottles. So the option is there to add difficulty, which is always good. But the base game is way to easy.

The other major change to this remake is the addition of a dungeon maker, which certainly sounds cool. You can create your own dungeons by dropping in single rooms (ie, only one-screen large) into a grid, and as long as all doors lead to other rooms and there's enough treasure chests to get keys for locked doors, you've got yourself a brand new dungeon to explore. Sounds like a blast! Except that the vast majority of the rooms you can use are rooms from this game. So forget having clever puzzles; you've already solved them in the main game so the puzzle rooms are pointless. That's not the worst thing in the world; NES Zelda dungeons are labyrinthine and combat-based with no puzzles, and they're fun to play. But being maze-like barely works here either, since you're making your own dungeons (hard to get lost in your own creations, after all), and even if you aren't the tools aren't there to replicate the Zelda experience. All chests you pick up automatically have keys in them until you have enough for all locked doors in the dungeon, so there's no creativity in chest location or providing false hope or whatever. You can't even have optional chests, because the boss key is always the last chest, so you HAVE to go get every one. So there's not much option for creating side routes in your dungeon either. There's also no map or compass items, there's very few bombable walls (so resource management isn't an option), and barely any chance for the element of surprise since you can't even create your own rooms. I've played and enjoyed randomized Zelda dungeons, but this seemed more like a chore than anything fun. It's a good idea, but execution-wise leaves a lot to be desired.

Phew, that's a lot of negativity. No, it doesn't mean this game is trash or never should have been made. If this is your first foray into the world of Koholint and don't mind the brevity or lack of challenge, there's a good chance that you'll enjoy yourself. Essentially, it all depends on if you think the easier and prettier version of a great game made for ancient hardware is worth $60 today. This isn't a massive, challenging, nonlinear adventure; it's a short, small, easy, focused romp. And it's a romp that feels smaller and simpler than it did 25 years ago.

If you enjoyed this The Legend of Zelda: Link's Awakening review, you're encouraged to discuss it with the author and with other members of the site's community. If you don't already have an HonestGamers account, you can sign up for one in a snap. Thank you for reading!

© 1998-2020 HonestGamers
None of the material contained within this site may be reproduced in any conceivable fashion without permission from the author(s) of said material. This site is not sponsored or endorsed by Nintendo, Sega, Sony, Microsoft, or any other such party. The Legend of Zelda: Link's Awakening is a registered trademark of its copyright holder. This site makes no claim to The Legend of Zelda: Link's Awakening, its characters, screenshots, artwork, music, or any intellectual property contained within. Opinions expressed on this site do not necessarily represent the opinion of site staff or sponsors. Staff and freelance reviews are typically written based on time spent with a retail review copy or review key for the game that is provided by its publisher.