As the Megamix affix implies, this release is actually a collection of stages from previous Rhythm Heaven titles, a music-based series known for its oddball, comical, light-hearted tone. Featuring the likes of a luchador constantly flexing in response to an interviewer's questions or cats wiggle-worming in delight to a bear chopping their wood, if you don't at least smile at these silly concepts, then you might have a black heart. And this is all based around a very simple rhythm system where you consistently press a button during specific moments; half the stages are essentially Simon Says gauntlets and the other half just wants you to tap along to catchy tunes. It's so easy, the devs can't possibly mess it up. Right?

Now, instead of throwing stages into a random pile and hoping for the best, the devs gave each area, consisting of four to five stages, a chronological flow, meaning each area has a Game Boy Advance, Nintendo DS, Nintendo Wii, and a new Nintendo 3DS stage. It's a smart way going about it, allowing equal screen time to each iteration of the series. Though, in one of the weirder changes to the flow, the remixed stages only make appearances in some spots of the game, instead of in every area. Remixed stages are the equivalent to boss fights for this IP, where the stages in a given area are haphazardly merged in a lengthy sequence, so I find their placement here a bit perplexing. 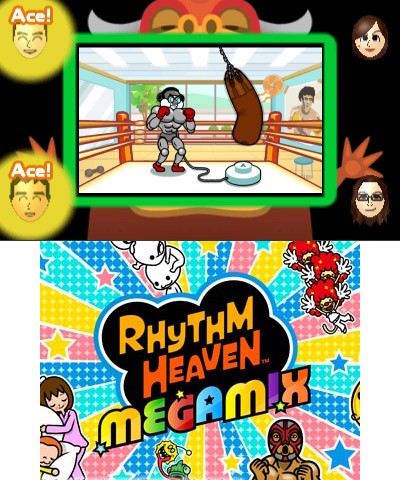 Other attributes have also been modified, with the most apparent being the visuals. Given how the series has been released on three prior systems, each showcasing differing specs and aspect ratios, these alterations make sense. The most justifiable of these changes go to all DS stages, which, if you're unaware, required gamers to play the portable on its side. Another notable example is the Advance stage called Spaceball, taking placing in a green room floating in space with a baseball player hitting balls popping out of a flower pot. That stage really exists. Anyway, due to constant zooming in and out of the room, the original looks very pixelated, but everything is smooth in the revision. Whether it'd be new basic assets due to expanded width of a stage, a different color palette, or an entirely fresh backdrop, the devs have ensured that every stage's core has at least remained intact and recognizable.

Megamix is the series' best title thus far, and I'm not saying that purely because it's an impressively hefty and lengthy compilation that spans more than 100 stages. This particular game fixed a reoccurring, irritating issue that constantly reared its head in the DS and Wii releases: a surprisingly strict and hard to read hit detection, especially on the Wii, and a questionable, indecipherable grading system that often failed players for the smallest mistakes. It was disheartening, because I wanted so bad to enjoy those two Rhythm Heaven titles to the fullest, but it wasn't happening. Mercifully, Megamix purges these flaws, one of which is with a robust grading system that not only shows you a percentage bar and other stats at the end of each stage, but is much more forgiving when it comes to mistakes; in general, you have a better outlook on what to improve, which is a far cry from being forced to guess what went wrong in the predecessors.

The hit detection also feels more lax in this outing, not to mention you actually get to see when to press buttons at specific moments of a rhythm during practice, courtesy of the 3DS' bottom screen. Oddly, failing practice makes these prompts materialize, so I purposely flunked each one that allowed it. Why not just outright show them? They don't make the game easy to beat, just easier to understand. Thankfully, this visual aid doesn't occur during the actual stages, however a compromise is made with a helpful hint system. With every press of a button, the bottom screen indicates how accurate your timing is in the form of exploding stars, with the goal being to sync the stars to the middle of the screen; if you're early, the stars appear to the left of the screen, if you're late, they're on the right, with mistakes being marked as red circles at both extremes. 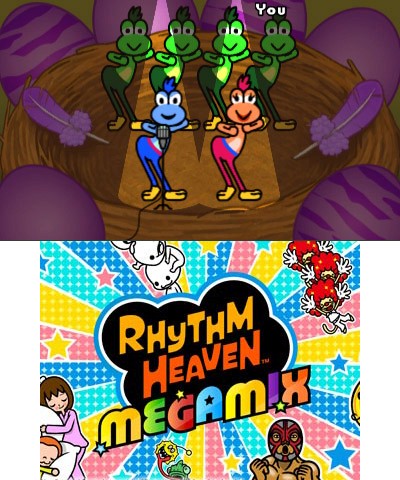 In turn, the revamping of both functions enable players to be more at ease with the game, allowing for an overall enjoyable experience. Stages that used to frustrate me in other games, such as the speedy table tennis battle or the segment of colorful marching birds engulfing the screen, are actually entertaining to play here, since I now know the proper rhythm sequences. Also, considering how much the Wii release annoyed me to no end, it's gratifying being able to revisit those stages without glaring problems clouding their quality. Even as Megamix gets really hard in the later parts, when the game requires a string of rapid button presses, I still had fun on a consistent basis; when I made mistakes, I couldn't blame the game this time around, because with the improvements, I actually conceded that the mistakes were my fault.

Weirdly, the best game in the series is a rehash, a compilation of stages from the last three titles, with a small batch of new stages and a boring story tossed in for good measure. Long time fans might be disappointed by this release because of its "lenient" difficulty and recycled composition, especially since the last Rhythm Heaven game came out approximately five years ago. If you never got around to playing one of these titles, you'll likely get more out of this release, and I wholly recommend purchasing this if you're into quirky stuff. Personally, because the game fixes some unnecessary problems that plagued the previous iterations, a lot of the stages come off like brand new, enjoyable challenges. I'm delighted, I'm having fun, and I'm even bopping my head and tapping my thumb to nearly every beat.

It's the Rhythm Heaven experience I always wanted.
4/5

If you enjoyed this Rhythm Heaven Megamix review, you're encouraged to discuss it with the author and with other members of the site's community. If you don't already have an HonestGamers account, you can sign up for one in a snap. Thank you for reading!

© 1998-2020 HonestGamers
None of the material contained within this site may be reproduced in any conceivable fashion without permission from the author(s) of said material. This site is not sponsored or endorsed by Nintendo, Sega, Sony, Microsoft, or any other such party. Rhythm Heaven Megamix is a registered trademark of its copyright holder. This site makes no claim to Rhythm Heaven Megamix, its characters, screenshots, artwork, music, or any intellectual property contained within. Opinions expressed on this site do not necessarily represent the opinion of site staff or sponsors. Staff and freelance reviews are typically written based on time spent with a retail review copy or review key for the game that is provided by its publisher.