To me, Blades of Time is a paradox. On the one hand, it's a rather enjoyable experience filled with action and intrigue. As a standalone game there's really nothing wrong with it at all. It has everything you could ever want in a hack-and-slash title. But on the other hand, it feels largely outclassed. I won't lie and say I didn't have fun slicing up hordes of monsters throughout, but at the same time, I also kept thinking, Wow, this seems a lot like God of War. It's put me in a bit of a bind that I'm hoping a fair bit of discussion will resolve.

A spiritual sequel to X-Blades, the provocative Ayumi returns on the hunt for treasure in the mystical Dragonlands. There, monsters try to eat her, traps try to mutilate her and puzzles try to stump her. She'll fight them off with a slew of deadly combos, dash out of their way, and figure a way out. She'll have to because there's more than just the minions of Chaos pursuing her.

The comparison to God of War is perhaps quite apt. You wield sadistic dual blades, sling spells without much care, and solve innumerable puzzles. It's just that the variety is lacking. Yes, it's totally fun to tear up swarms of zombies with sharpened swords, or blast winged warriors out of the air with a high-powered rifle. It's thrilling to ignite a sea of humanity on fire or freeze pesky critters in place. But the catharsis isn't quite the same. Executing combos just involves clicking the mouse. There's no rhyme or reason to it. At least with God of War you had to press a certain sequence just right to unleash swirling death. Ayumi's quick time events also lack luster: just press the use key when prompted to execute a finishing blow. Don't get me wrong; it's still fun to watch, but you'll never see anything quite like a blood geyser pouring out of a minotaurs throat in Blades of Time.

One of the first levels introduces you to the time rewind ability. Activating it produces a clone of Ayumi that re-enacts all of her actions until a certain point while freeing up her current self to do something else. My favorite trick involves casting a freeze spell on a wall of monsters, cutting them to pieces until they regain use of their limbs, then rewinding time to get the effect of the spell again. An added damage buff usually ensures they all die within seconds. See, the effect only repeats past actions; neither you nor your enemies replenish lost health from the chronological reversal. You can even rewind time in the middle of a current cycle, which produces a second clone for even more intense wholesale slaughter. In fact, you can do this as much as you want provided you're not in a Chaos Zone or some other restricted part of a level.

Without the rewind ability, things become a lot more difficult. Pockets of warped space, Chaos Zones mostly serve as impassable barriers to the next part of a level. However, weaker manifestations slow you down, disorient you, and provide great hiding spots for invisible monsters. Casting an Order spell disrupts its effect, but only temporarily, and you still can't rewind time.

So it's good that the presence of Chaos Zones never necessitates the ability. Some occasions even mandate its use. Heavily armored zombie warriors deploy magical shields that render them invulnerable except to rapid-fire rifle shots. Only by creating several clones of yourself can you push enough lead to shatter their defense. The same demand holds true for the terrifying Chaos Slasher, who cannot be killed. He's fast and can suck you into his whirlwind arms from a short distance away. He'll then chew on you until you pound on him enough to make him let go. The only way to pass him is to distract him with a number of clones so that you can destroy an obelisk, open a door or whatever it is you need to do to get out. 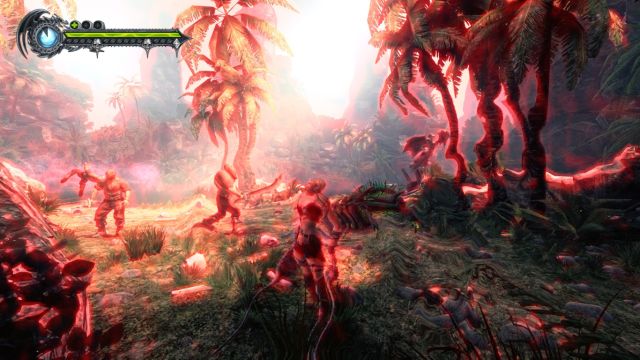 The only other time you'll need this ability is to solve puzzles. But most of these are uninspired. Step on a button; produce a clone; walk onto another button; then wait for the clone to step on the first again. Rinse and repeat. Occasionally you'll get a more challenging one that requires you to use the Order spell to channel energy bulbs into a portal or something, but these are few and far between. But they don't even require the Time Rewind ability.

There's also the fact that this skill isn't as unique as it was marketed to be. Aside from the clone aspect, you can get the same results by playing Prince of Persia: Sands of Time. Hell, even God of War II let you slow down time. While not exactly the same thing, the concept of manipulating time isn't anything to sneeze at anymore.

Bosses do provide a nice break from the usual fare found within a level. Like many games before this, these often have a specific weakness that you must exploit and attacks that you must avoid. However, they're still challenging. The tribal zombie chieftain, fought at the end of the second stage, would shoot fireballs out of his wooden staff, which he did in quick succession. The guy was huge, but you could only reach him by swinging from flying coral to flying coral until you got to his platform. There you'd have just a few seconds to lay into him before he'd release a gigantic burst of fiery energy that engulfed the whole area. This means you had to start swinging back around well before then. I had a ball with this one, mostly because I enjoyed the sheer speed and dexterity it took to continuously fly around the room. 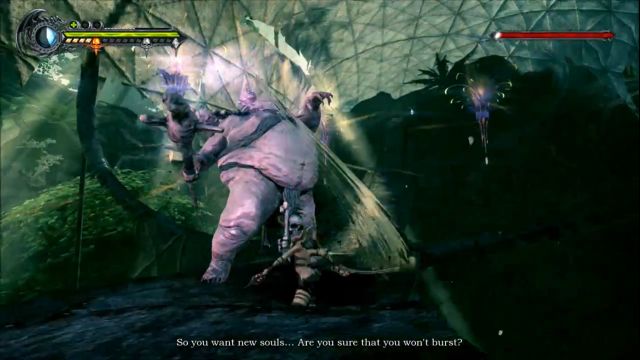 There isn't a whole lot more to be said for this game. I'm still in a bind as to how I feel about it. I mean, if it weren't for the fact that its predecessors far outclass it, this title would come highly recommended. Yet, here I am, wondering. I'll just end with a brief weigh in. Is it an enjoyable experience? Yes, it really is. It's action-packed and provides enough variety to keep it from getting old. But is it better than the likes of God of War, Prince of Persia or Devil May Cry? No, it most certainly isn't. Nor can it be, and I suppose I can't fault it for that too much.
3/5

If you enjoyed this Blades of Time review, you're encouraged to discuss it with the author and with other members of the site's community. If you don't already have an HonestGamers account, you can sign up for one in a snap. Thank you for reading!

© 1998-2020 HonestGamers
None of the material contained within this site may be reproduced in any conceivable fashion without permission from the author(s) of said material. This site is not sponsored or endorsed by Nintendo, Sega, Sony, Microsoft, or any other such party. Blades of Time is a registered trademark of its copyright holder. This site makes no claim to Blades of Time, its characters, screenshots, artwork, music, or any intellectual property contained within. Opinions expressed on this site do not necessarily represent the opinion of site staff or sponsors. Staff and freelance reviews are typically written based on time spent with a retail review copy or review key for the game that is provided by its publisher.