As far as strategy titles go, Oil Rush has to be one of the most compelling I've played in a long while. Set sometime in the distant future where nuclear war has rendered our planet a watery abyss, you, the player, are tasked with fighting a new war in an attempt to extract the world's remaining oil reserves. With no dry land in sight, the only means of transportation consist of naval vessels and aircraft.

What makes this game so compelling isn't the plot (which is fairly stereotypical) or even the environment (which is quite beautiful despite the post-apocalyptic setting). It's the careful balance between a remarkably simple interface and complex strategy. Unlike other examples of this genre, you don't need to consider eight million factors when planning a move, or gather fifty kinds of resources, or examine ninety different stats. Instead, your concerns lie with your units and, of course, oil.

At first, you'll only control light gunboats that are designed for quick captures and small raids, but as you progress through each campaign stage, you'll acquire increasingly heavier ships built expressly for demolishing towers and absorbing damage. You'll also gain control of several types of aircraft, each with similar weight classes to your ships but with the advantage of maneuverability. Also, aircraft can only be targeted by anti-aircraft towers, and, to a lesser extent, lightweight bunkers.

How you divide your units will determine your success in a mission. You can only move forces from one platform to another, and only in three degrees of strength: max, half and quarter. This leaves little room for misjudging enemy numbers. Sending only a quarter of a platform's units to capture a heavily fortified shipyard will likely end in failure, and set you back as you wait for your lost ships to regenerate. However, attacking an enemy's base at full strength leaves your own platform vulnerable to attack, especially when you don't have enough oil to build defensive towers. Things become even more complex when oil rigs come into play. You can't build on these platforms, which means the only way to defend them is to leave your own forces behind. Naturally, this means you have less to play with when assaulting other facilities.

During the course of a level, you'll earn technology points which can be used to purchase a variety of bonuses. You'll acquire points by completing target objectives or defending your own platforms from attack. However, you'll almost never earn enough to max out your tree, especially later on, so the trick comes from deciding which skills would benefit you most in a given stage. My most obvious experience with this dilemma came fairly late in the game. Trusted with leading a small group of sailboats to safety, I soon realized that I could only consistently rely on the forces given to me. Unlike most stages where I would focus on bulking up platform defense, here I neither had the resources nor the time to do this. Hounded by an enemy navy far stronger than my own, I had to press forward quickly, capturing only the platforms necessary for survival. I did not earn many skill points here, so I had to select my skills with the utmost precision. I focused heavily on unit armor and weapon upgrades, but also boosted speed when I could. I also relied heavily on the Demoralize skill, which weakens enemy units and towers on the selected platform. Even with careful planning, the mission took several tries to beat because even with careful skill choice, I still had to work out how to split my forces so as to protect the innocents I had to guide to safety. 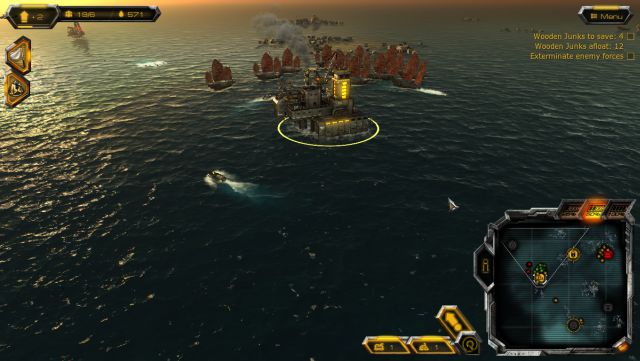 The example I just gave may demonstrate the challenge still existent even after most skills and units become obtainable. However, the game also does a great job of maintaining that challenge throughout. In most cases, you'll face technologically superior forces to your own. For instance, you won't get Anti-Aircraft turrets until well into the third chapter, but a stage halfway through the game almost mandates them. In fact, this was perhaps the most difficult level I ever played in the entire campaign.

This stage plays out like a traditional tower defense sim. You've got just one platform  a helipad  to protect, but it can't produce units. Your source of oil trickles in slowly from some outside source, so must be rationed wisely. The only way to fight off the enemy is to fortify this platform and the surrounding forts with guard towers. As enemy waves sail in, you'll be met with heavier assaults. More troops combined with stronger units will see your preliminary defenses smashed to bits in minutes. After the fifth wave, you start seeing aircraft, which will later be mixed in with traditional naval units. This deadly combination demands careful tower construction since only bunkers can take down aircraft. Further complicating things, only the third level bunker truly annihilates aircraft, so you'd better hope you've planned well enough ahead so that you'll have several maxed out before the heavy craft soar in.

To make matters worse, enemy naval units gain strength, too. Upgraded classes of Hammerheads (amphibious tanks) soak up damage like a sponge and only prove vulnerable to artillery. Capable of destroying towers within seconds, you'll have to use every skill, every drop of oil, at your disposal to finish off the incessant waves without losing your only base. Beating this level proved so difficult that I nearly gave up then, but my perseverance eventually paid off, and once I succeeded, I felt an overwhelming sense of reward. 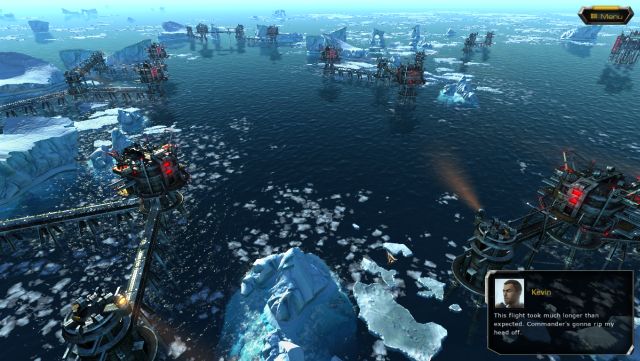 In fact, the campaign stages provide such a wide variety of challenges and scenarios that beating each of them provided its own sense of accomplishment. Sure, some yielded stronger reactions than others, but nearly all of them had something to show, and I never once found myself growing tired of repetitiveness. So, when I finally beat the whole campaign, I was both shocked and disappointed to see that the playability more or less ended there. Because while there's quite a large selection of quick-game maps to explore, they all have the same objective: capture all enemy platforms. (Occasionally, you'll have to capture just one central platform, but these are rare.) The only real differences between these smaller stages are the environments and oil availability.

I had also hoped to explore the multi-player option, but found all the server activity had died. So unless you know someone who owns Oil Rush, don't expect to find any active games to randomly join. Thankfully, you can still shoot for unlocking all campaign-related achievements, but once that's done, there's almost nothing left. This is rather disheartening because the game itself is truly fantastic. The level of strategy involved is remarkable despite the simple interface, the scenarios are challenging, and the innumerable ways to complete your objectives add much to my sense of satisfaction. I just wish I could do more than just imagine how much of a blast playing with real people would be.
4.5/5

If you enjoyed this Oil Rush review, you're encouraged to discuss it with the author and with other members of the site's community. If you don't already have an HonestGamers account, you can sign up for one in a snap. Thank you for reading!

© 1998-2020 HonestGamers
None of the material contained within this site may be reproduced in any conceivable fashion without permission from the author(s) of said material. This site is not sponsored or endorsed by Nintendo, Sega, Sony, Microsoft, or any other such party. Oil Rush is a registered trademark of its copyright holder. This site makes no claim to Oil Rush, its characters, screenshots, artwork, music, or any intellectual property contained within. Opinions expressed on this site do not necessarily represent the opinion of site staff or sponsors. Staff and freelance reviews are typically written based on time spent with a retail review copy or review key for the game that is provided by its publisher.