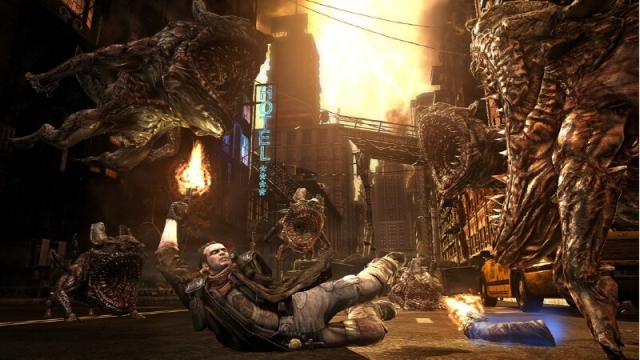 Neverdead, the upcoming third-person shooter from Konami, puts players in the shoes of an immortal demon hunter named Bryce Boltzmann. It won't be long before gamers can help Bryce slay monsters either, with Konami's recent announcement that the game would be shambling its way onto store shelves January 31st, 2012.

Neverdead is the work of Shinta Nojiri and Rebellion Software and much of its charm is made clear in the title. No matter how hard his demonic adversaries may try, Bryce simply can not die, even should he be torn to shreds.

In the press announcement revealing Neverdead's release date, Nojiri went on to talk about the affects an immortal protagonist has on the gameplay, saying, "In NeverDead, we've gone all out to change the approach the player takes in battle. Losing a limb is a mere inconvenience and Bryce's physical skills allow a wealth of ways to take out the enemy  from close-range combat, to throwing limbs into clusters of monsters and shooting them remotely."

Bryce doesn't just take himself apart to combat, either. He can throw his head to reach areas he otherwise couldn't and can even re-attach his body parts, limbs and more, back to as though they'd never fallen off in the first place.

The last bit of news Konami thought to share is that Neverdead will be getting some DLC, though they failed to specify what that DLC would be.

DLC aside, Neverdead looks to be a unique, interesting idea that third-person shooter fans will want to keep their eyes on. January 31st isn't very far away, so if immortality and demonic hunting, so start saving now.

If you enjoyed this Neverdead article, you're encouraged to discuss it with the author and with other members of the site's community. If you don't already have an HonestGamers account, you can sign up for one in a snap. Thank you for reading!

© 1998-2021 HonestGamers
None of the material contained within this site may be reproduced in any conceivable fashion without permission from the author(s) of said material. This site is not sponsored or endorsed by Nintendo, Sega, Sony, Microsoft, or any other such party. Neverdead is a registered trademark of its copyright holder. This site makes no claim to Neverdead, its characters, screenshots, artwork, music, or any intellectual property contained within. Opinions expressed on this site do not necessarily represent the opinion of site staff or sponsors. Staff and freelance reviews are typically written based on time spent with a retail review copy or review key for the game that is provided by its publisher.