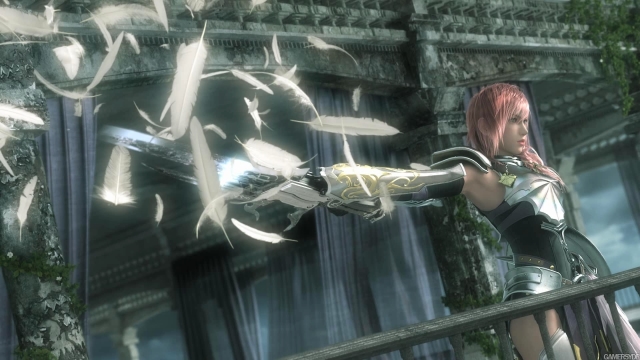 Crossovers are nothing new to video games. One need simply look at Soulcalibur to see a few out of place characters cropping up. Even so, few could have expected Assassin's Creed, of all things, to be making an appearance in Final Fantasy XIII-2.

Yet that is what Square Enix has chosen to reveal as part of the upcoming Final Fantasy XIII sequel. Ezio's outfit from the latest Assassin's Creed game, Revelations, will be available as a DLC costume for one of XIII-2's two protagonists, Noel Kreiss.

Of course, this isn't the first Assassin's Creed cameo that's been announced for an upcoming game. The previously mentioned Soulcalibur series will have him as a playable guest character in the next entry in the franchise, Soul Calibur V.

While Ezio's iconic assassin's outfit won't likely be enough to make any Final Fantasy XIII-2 doubters change their minds, it is certainly a welcome surprise for those excited for the game. Final Fantasy XIII was somewhat lacking in the DLC department, and Square Enix seems to be compensating with the wealth of planned DLC they've already announced for its sequel.

Final Fantasy XIII-2 has a planned release date of January 31st, 2012 for the Xbox 360 and Playstation 3 in the US. Square Enix have said they're reveal more details about the DLC costume at an unspecified, future date.

If you enjoyed this Final Fantasy XIII-2 article, you're encouraged to discuss it with the author and with other members of the site's community. If you don't already have an HonestGamers account, you can sign up for one in a snap. Thank you for reading!

© 1998-2021 HonestGamers
None of the material contained within this site may be reproduced in any conceivable fashion without permission from the author(s) of said material. This site is not sponsored or endorsed by Nintendo, Sega, Sony, Microsoft, or any other such party. Final Fantasy XIII-2 is a registered trademark of its copyright holder. This site makes no claim to Final Fantasy XIII-2, its characters, screenshots, artwork, music, or any intellectual property contained within. Opinions expressed on this site do not necessarily represent the opinion of site staff or sponsors. Staff and freelance reviews are typically written based on time spent with a retail review copy or review key for the game that is provided by its publisher.