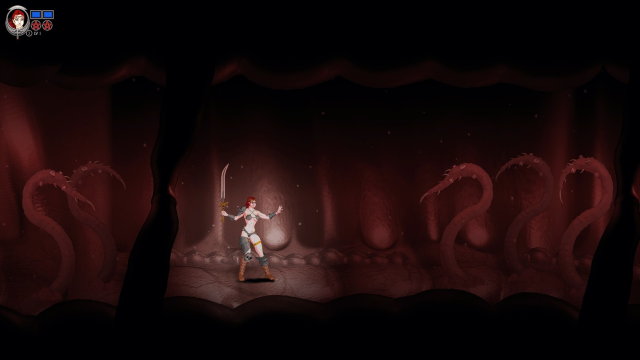 Probably won't cost you an Arm(ageddon) and a leg.

In 2060 the end of the world has come, and humanity is on the edge of extinction. Against the army of Hell, four formidable warriors, known as the Demi-Angels, arise. They will have to face horrors of all kinds and fulfill the darkest of the prophecies.

FEATURES:
◾ Run, shoot, dodge, and slice; an explosive mix that will chain you to the pad.
◾ Explore a vast, dark, interconnected world ravaged by the advent of the apocalypse.
◾ Upgrade your character, level up, buy guns, swords and armors.
◾ Celestial spells: Slow down time, turn your enemies into salt, spread your wings and fly, turn the undead and many other miracles.
◾ Bullet Hell: Freeze incoming enemy bullets with your sword and then pass through them.
◾ Share the massacre; Yes, with a friend, you can play single or local co-op.
◾ Four playable characters: Each Demi-Angel comes with unique powers.
◾ Dismemberments, Blood and Guts: Blast your enemies in a shower of blood, incinerate them, flesh them out, or just cut them to pieces.
◾ Heavy Metal Soundtrack: Delight your ears with this divine metallic music.

If you enjoyed this Armageddon Onslaught article, you're encouraged to discuss it with the author and with other members of the site's community. If you don't already have an HonestGamers account, you can sign up for one in a snap. Thank you for reading!

© 1998-2021 HonestGamers
None of the material contained within this site may be reproduced in any conceivable fashion without permission from the author(s) of said material. This site is not sponsored or endorsed by Nintendo, Sega, Sony, Microsoft, or any other such party. Armageddon Onslaught is a registered trademark of its copyright holder. This site makes no claim to Armageddon Onslaught, its characters, screenshots, artwork, music, or any intellectual property contained within. Opinions expressed on this site do not necessarily represent the opinion of site staff or sponsors. Staff and freelance reviews are typically written based on time spent with a retail review copy or review key for the game that is provided by its publisher.