I don't know how it is even possible to take characters from several Final Fantasies and Dead or Alive and come up with an endless fight scene that is ten times as crazy and awesome as the entire Advent Children (which was, itself, one long battle scene), but my mind? It is blown.

The 80GB PS3! The one with backwards compatibility! And my coveted MGS4, which we won't get until September 2012, when it has been sufficiently stripped of extra content and inflated in price to 70â¬ ($113)! And the Dual Shock 3, which I couldn't care less about but is bound to be expensive too. We don't even HAVE backwards compatibility PS3s of any kind. And it's all for a price cheaper than even our low-end crappy PS3 version by itself.

So, I still don't know how FFXIII plays or what Versus even is, but I love stylised, fluid CGI action :D Get ready to drool:

I don't have a PSP and I don't even want one, but oh God, that's the game of the year right there :D You only have to watch the video once to get the rhythm stuck in your head for the rest of the week.

Apart from the catchy music, it also seems to have awesome visual design and crazy character customisation. Let's start porting it, developers!

What follows is my own, let's say, non-serious take on a Mighty Beanz review. I think it's pretty clear that it can't be submitted officially anywhere, so I guess this is as close as it'll get to being published. It's been some time...

While in a MSN Messenger conversation, I heard the name Mighty Beanz for the first time. Upon further inquiry, I obtain the following information:

Sparky says:
It's this fucking awful puzzle game that we can't stop playing

Mart says:
so it's bad yet addictive? like phone-shopping adverts? :-O

Sparky says:
Weâve both nothing but play since it started 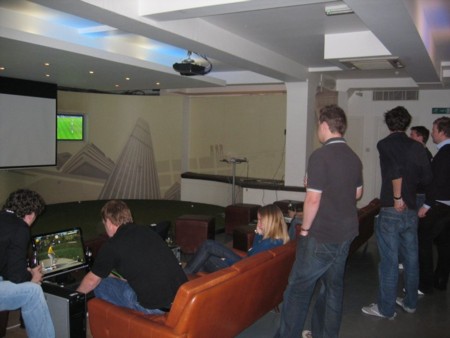 The press event concerning the future release of the computer game UTour Golf took place in Urban Golf, a slick, well-lit venue with modern furniture and tasteful minimalist decoration. It is also, strangely enough, a place where you can play actual golf in Central London.

Okay, I don't have a lot of experience with my shiny new old DS, but so far I can tell you this: Meteos is fun and addictive as hell. There's something about the launching blocks concept that works strangely well from the very first time you play.