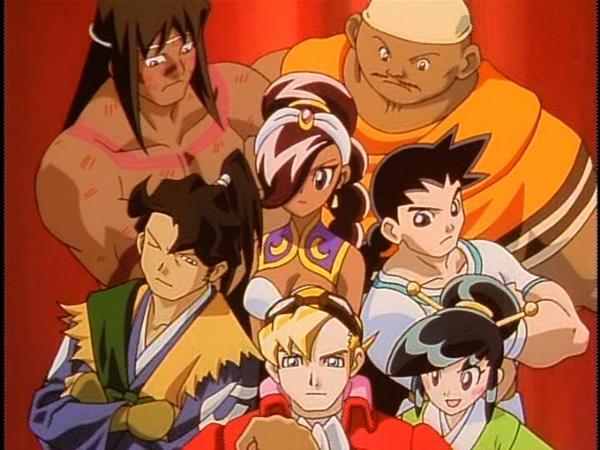 Finished watching the Anime adaptation of Power Stone not long ago. For those who know it, Power Stone was a Capcom game that got ported to the SEGA Dreamcast in the late 90s and seemingly acquired quite the popular vote by gamers to the point of becoming a cult classic nowadays. I had never played the game myself, probably might never get the chance to either, but at least saw its animation adaptation so there is that.

The series centers around Falcon, heir to a wealthy adventurer who loves running away from home and responsibility, living for adventure himself. He is followed closely by his butler who keeps reminding of his duties to no avial. One day after a prized fight, Falcon is informed that his father got missing while searching for the fabled Power Stones which he's in possession of one. Falcon and his butler sets off on a journey where he meets others holding other power stones as well as those who would try to capture them all and undermine their power, all the while keeping his hopes up in meeting with his favorite fighter in the world, Vargas.

The Anime starts a bit slow with a few quirky episodes until Falcon masters his own Power Stone to transform into his powerful entity and be able to fight off enemies that keep reappearing in any other given time, or any other similar danger that occurs. While the series does feature the entire cast of characters from the game eventually, it does not feel rushed nor cramped once they are all gathered, and can at times be quite entertaining to observe their interactions as the Anime progresses. Falcon is a brash, hot tempered young man, not one to embrace patience by any means of the word which can be a bit annoying at times.

The Anime does not go out of its way on being exceptional but it does not go too far in being unwatchable either, although most of the time episodes feel like filler even when staying the course. Its only when in the last episodes of the second season when things pick up and get quite intriguing, but by then you lament in knowing that it could had occurred much sooner. Still, 26 episodes is not too long to appreciate it all really, and the humor within it guarantees a good time in watching it all, even when it gets a bit cheesy in some parts. There is romance included within characters, but mostly it comes out for laughs much more than anything else, although characters like Rouge and Ryoma seemed to have the most development of the bunch.

The artstyle as with many game adaptations often mimics the source material, although watching it in animation seems a bit too plain and simplistic even by the time it was produced. The entire resolve at the end does accomplish the series, but it feels like it could had been much more by the time you watch the last episode. As you might expect, the English dubbing can make or brake the Anime, and Power Stone is no exception, making it feel as corny as with other Anime that got localized at that time such as with Sonic X when it aired in American airwaves. The Anime was shown in Canada and it would not be released around in America during that time until it was uploaded on its entirety on youtube for fans to watch.

So is Power Stone worthy of the gamer fan? Well, yeah, a bit to be honest. It is entertaining enough that you will stay watching till the end even if you had not experienced the game beforehand. Not sure about anyone who has played the game, but I can state that this Anime is not too bad to add it into the list of gaming Anime you must watch. Like I had stated above, it is uploaded on youtube to watch for free, but also on Anime streaming services should you decide to hunt for it. The television show was produced by Studio Pierrot in association with Capcom and directed by Takahiro Omori and was
also released in VHS and DVD.