Even if youve been playing games based on The Simpsons cartoon for as long as theyve been available, a span of time that includes more than two decades, you can probably count the number of good experiences the license has produced on one four-fingered hand. You might even have a digit or two remaining. Matt Groenigs fictional Springfield has often been the victim of crippling play control, unimaginative and repetitive levels, insane difficulty and just plain bad design. Yet there have been a few exceptions to that well-documented rule, cases where nearly everything went right. The most well-known of those exceptions is The Simpsons Arcade Game.

Until this week, you had to drop quarters if you wanted to experience that classic gameplay. You had to find a bulky arcade cabinet if you and up to three friends wanted to terrorize Springfield on the way to rescue Maggie from her nefarious abductors, Smithers and Mr. Burns. With the games release this week on Xbox Live Arcade for 800 Microsoft Points, though, its much easier to relive the arcade glory days. Thanks to the wonders of the Internet, you and your friends no longer even need to occupy the same building. 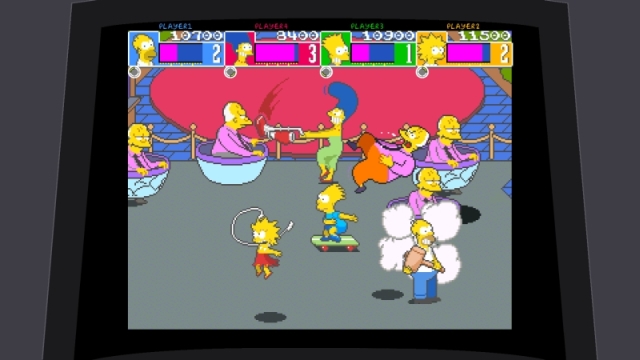 The Simpsons Arcade Game conversion was handled by Backbone Entertainment. You probably dont have a lot of trust in that name if youve played too many retro compilations, but dont worry; many of the interface issues that plagued past titles from the likes of Midway and SEGA are blissfully nonexistent here. Controls are smooth and responsive, plus it easy to configure the game so that you can experience it the way you want. Furthermore, the visuals are sharp and crisp, with a suitable border around them so that they really pop even on a large widescreen television.

Of course, the core game hasnt changed. You start your quest to rescue Maggie by choosing from one of the four remaining members of the Simpsons householdBart, Lisa, Homer or Margeand then you battle your way through eight stages that take place in familiar locations from the earliest and most classic episodes of the cartoon. Youll start in the city streets, but your quest will also take you to Moes Tavern, the Nuclear Power Plant, the television station and the cliff where Bart and Homer learned a valuable lesson about skateboarding. Youll even venture off into a dream world version of Springfield where giant and very hostile doughnuts try to cut short your mission.

The Simpsons Arcade Games plays out like a number of other popular titles from its era. If youve played Konamis classic take on Teenage Mutant Ninja Turtles or if youve played retro brawlers like Final Fight or Double Dragon or Streets of Rage, you have a good idea what to expect. Environments are largely decorative, mere arenas that you clear by violently smashing anything that gets in your way as you progress from left to right. What makes this effort stand apart from the crowd of similar titles, though, is its attention to detail. Konamis little team slapped the original game together in less than a year, but clearly someone on board took the time to watch a lot of episodes. 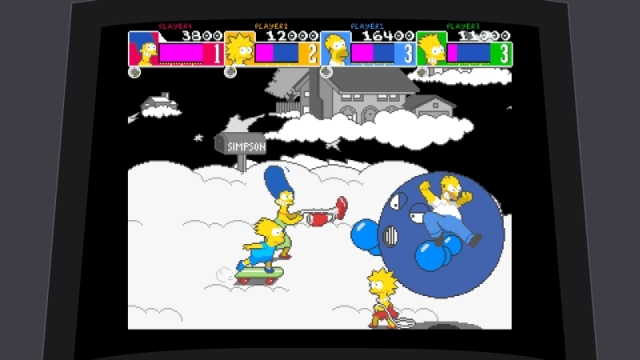 As you tear apart Springfield, youll encounter familiar faces. Barny stands at a bar, waving his arms like a buffoon. Nelson hands you a slingshot before you walk along a ledge in front of a waterfall that is teeming with three-eyed radioactive fish. Bleeding Gums Murphy puts on a show with his band in the news station, a Homer-like Sasquatch attacks you after emerging from a cave in the forest the list goes on and on. Even moments that you might not recognize from episodes have a comfortable familiarity, such as when you venture too close to a bakery door and the woman inside opens it so quickly that youre flung toward the screen.

The playable characters also have unique fighting styles that are true to their cartoon personas (at least to the extent that is possible, given the games unlikely premise). Bart swings his skateboard around as a weapon. Homer swipes with his fists. Marge hefts a vacuum cleaner or swings her bony hips. Lisa whirls her surprisingly lethal jump rope. If youre playing with friends, you can also team up for special attacks. You havent lived until youve watched Bart and Lisa run around the screen, holding hands and dodging between thugs.

As for the thugs, the variety on display here is a pleasant surprise. Certainly, youll see a large number of recycled goons, but the variety is still impressive considering the games era. There are pot-bellied businessmen, women with afros, ninja warriors, ghosts and lanky janitors, among others. New stages always have a new threat or two, and even familiar adversaries will mix things up by bringing weapons to the brawl. You can do the same thing yourself; theres a seemingly endless supply of knives, soda cans, brooms and hammers that you can put to use along the way. You can even heft the family cat in one instance, or toss Santas Little Helper across the screen to clear out a line of adversaries. 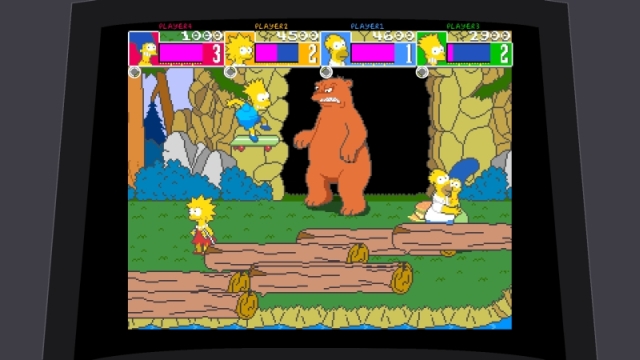 Boss encounters are similarly memorable. Youll battle an overweight wrestler who drops down from a blimp in the first stage, and later youll face a large bear, a Chinese warrior, a Krusty balloon and several other unique adversaries. Its never necessary to memorize complex patterns in order to win. You simply have to wail on anything that moves. Its a cathartic release, though, made all the more enjoyable by the familiar characters and the catchphrases they shout on occasion.

Unfortunately, the eight stages can be cleared in less than a half-hour, particularly if you play on the lower of the games four difficulty settings. Theres only so much to see here, and youll probably tire of it by the time youve earned an achievement by playing through the game as each of the four characters. You can keep going as you try for a better place on the leaderboards, or as you play Survival mode and limit yourself to just one character. Its also possible to play the Japanese ROM, which lets you gobble down food to extend your life meter while you attack with fresh weapons. Theres also some interesting extra content that you can unlock, including character profiles (as if you dont know who the characters are by now) and a timeline that outlines the arcade games original development and release. Playing with friends always makes things better, too.

Despite the enhancements, The Simpsons Arcade Game really is an adventure best relived by those who remember days spent slapping around joysticks and sticky buttons when they played the old arcade cabinet at the Laundromat, or at a convenience store, pizza parlor or even at a proper arcade. If you grew up loving the cartoon and playing bad games that didnt capture that fun, this is a palate cleanser. For the newer generation of gamer, its mostly just another reminder that times and games and even The Simpsons themselves have changed.

If you enjoyed this The Simpsons Arcade Game review, you're encouraged to discuss it with the author and with other members of the site's community. If you don't already have an HonestGamers account, you can sign up for one in a snap. Thank you for reading!

© 1998 - 2022 HonestGamers
None of the material contained within this site may be reproduced in any conceivable fashion without permission from the author(s) of said material. This site is not sponsored or endorsed by Nintendo, Sega, Sony, Microsoft, or any other such party. The Simpsons Arcade Game is a registered trademark of its copyright holder. This site makes no claim to The Simpsons Arcade Game, its characters, screenshots, artwork, music, or any intellectual property contained within. Opinions expressed on this site do not necessarily represent the opinion of site staff or sponsors. Staff and freelance reviews are typically written based on time spent with a retail review copy or review key for the game that is provided by its publisher.