Unstoppable Gorg is a tower defense game with a twist. Thats a claim that any PR person might make about any new offering within the genre. In this case, though, its an especially apt description because the twist is this: you twist things.

Envision, if you will, the vast reaches of space. Theres a black canvas, lent personality only by the presence of a few twinkling stars and maybe some of that pink discoloration that looks like someone spilled strawberry milk on an ebony floor. At the center of that expanse, drop something worth saving--a moon, or a space ship or what have you--and sketch some circles at regular intervals, spreading outward from that central point like sound waves from a radio tower. Drop some nodes on those circles, and at the edges of the screen you should place something nasty. Alien spaceships will do quite nicely. 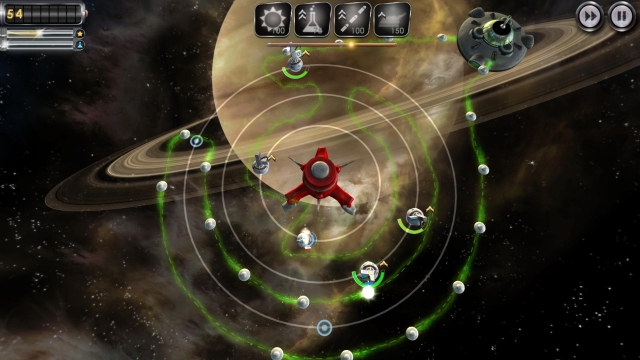 Thats your basic map in Unstoppable Gorg. After an initial phase where you decide which units youll have at your disposal, a stage properly begins when a line appears and outlines a route from the enemy vessel along the screens edge to your tower at its center. A single line will soon be joined by another one or two, and theres no predicting where those paths will appear unless youve played that stage enough that youve become familiar with each wave. Thats where the twist comes into play. If you set a defensive satellite on a node to block the advance of one group of slimy aliens, it can blast them into oblivion and then you can rotate the ring so that your satellite moves into position to defend against an entirely different threat.

Your typical tower defense game presents you with a map and well-defined routes that you must monitor. The only real question mark in a game like Defense Grid: The Awakening or even Orcs Must Die! is which of a few limited paths your foes will follow on their way to your tower. The solution in those other games is to identify the choke points and then spend the rest of your time stockpiling units that can inflict the most damage to enemy units as those foes come within range.

Unstoppable Gorg requires a slightly different strategy and feels unique as a result. Identifying choke points is easy enough and still necessary, but you cant afford to commit yourself to any one point with the same reckless abandon. Youll often find yourself with several nodes where you might easily position a gun satellite, for instance, but you cant afford to think about just the current wave. More than usual, you need to find a position that provides you with a chance to slaughter the current wave of aliens and perhaps the next two or three that follow. 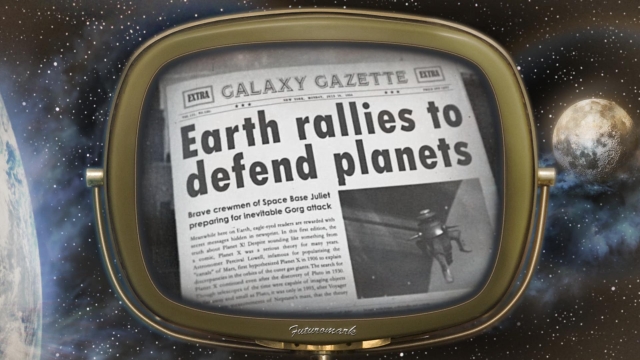 Another consideration is unit type. Do you pour your resources into a bunch of guns that may become ineffective if youre attacked by a slew of aliens wearing energy shields, or do you go with a variety of units that all have a harder time with any one type of enemy but which will be better able to adapt to surprises? Do you purchase an extra generator early on in hopes that youll recover and find yourself with plenty of resources at the end of the stage, or will the aliens come at you so quickly at the start that you cant afford expansion until most of the way through the battle?

Such concerns keep Unstoppable Gorg fresh and exciting. The longer you take to make any decision, the greater your likelihood of failure. Clearing a stage isnt always enough, either, even if you technically havent failed. Each stage also features a science award, which increases the number of upgrades you can apply to the units that you call into action in subsequent stages. If you clear a bunch of stages without science point awards, youll need to take another stab at the previous areas just to stand a chance at the later ones. A particularly good performance also grants access to challenge versions of each stage.

While the challenge stages are a welcome addition and can definitely live up to their name (while also providing replay value), they dont feel entirely necessary. Unstoppable Gorg is a difficult game, even on its easiest setting. The moderate setting serves as the default, and it can be a lot to handle by the time you find yourself approaching the final few stages. Players who are unfamiliar with the genre will find the easy mode more appropriate, but even that setting can prove frustrating. Challenge stages only tend to exacerbate the issue. If youre already having trouble with a given zone, youre hardly likely to enjoy it more when there are added complications such as constantly spinning nodes or (perhaps even worse) nodes that are locked into place. 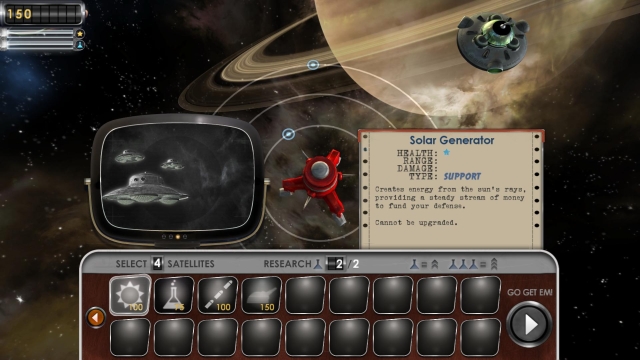 Unfortunately, some of the games challenge also comes from the wrong place: the control scheme. Theres no gamepad support, so youll have to handle everything with a keyboard and mouse. That would be fine except that sometimes a mouse doesnt feel like the right way to control the orbit of your satellites. You can click on the desired ring and spin it as you see fit most of the time. In other cases, the ring will turn erratically or it wont react at all. In particularly bad cases, such aberrations might prevent you from positioning a satellite in time, or (even worse) they could lead to your satellites unwelcome destruction as you accidentally place it in the path of a poisonous cloud or a string of lethal enemies instead of moving it to safety. Such occurrences arent frequent, but theyre always unwelcome.

The game also has other rough edges. Nothing ever feels visually arresting, for instance, even on the highest graphical settings. There are seemingly endless streams of aliens on-screen at once in later stages, but often they look like nothing more than tin cans or slugs. Between levels, cutscenes tell an intentionally corny tale in the style of old sci-fi flicks (presented here in mock news reel format), but such sequences are brief and they often reuse a number of assets. The end result feels decidedly low budget. It works, sure, but it still feels weak at times.

If youre a fan of tower defense games and youve already played through Defense Grid, Plants vs. Zombies and Orcs Must Die!, consider spending some quality time with Unstoppable Gorg. Youll likely be pleased by the challenge that awaits you, even if the production values and occasional control issues leave you unimpressed. Genre newcomers should probably start elsewhere, perhaps with the less expensive iPad version. Hows that for a twist?
3.5/5

If you enjoyed this Unstoppable Gorg review, you're encouraged to discuss it with the author and with other members of the site's community. If you don't already have an HonestGamers account, you can sign up for one in a snap. Thank you for reading!

© 1998-2021 HonestGamers
None of the material contained within this site may be reproduced in any conceivable fashion without permission from the author(s) of said material. This site is not sponsored or endorsed by Nintendo, Sega, Sony, Microsoft, or any other such party. Unstoppable Gorg is a registered trademark of its copyright holder. This site makes no claim to Unstoppable Gorg, its characters, screenshots, artwork, music, or any intellectual property contained within. Opinions expressed on this site do not necessarily represent the opinion of site staff or sponsors. Staff and freelance reviews are typically written based on time spent with a retail review copy or review key for the game that is provided by its publisher.