Skylanders: Spyros Adventure is a competent adventure game for kids made remarkable by its gimmick: collectable figurines that let you play in new ways.

As you can deduce from the title, Skylanders is the latest entry in the Spyro franchise that began on the PlayStation and expanded to other platforms. Some of the recent installments, while interesting, failed to really captivate the public. The games tended to be rather complex and frequently they played awkwardly, plus a lot of them were part of a trilogy. That made it difficult for someone to get involved partway through the story. When it came time for the latest adventure, Activision wisely went back to the drawing board with a fresh developer and a unique idea. 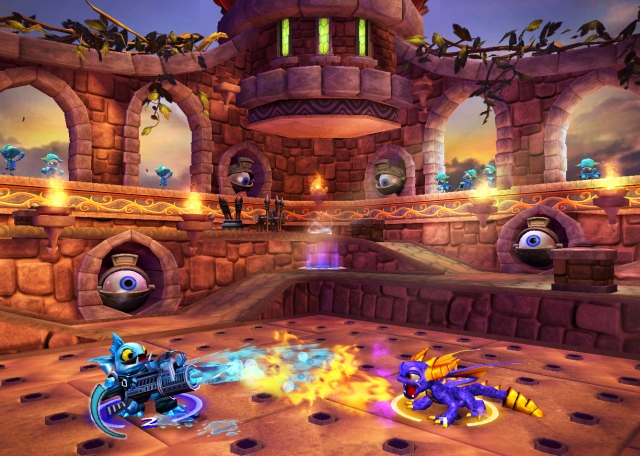 Skylanders tells the story of a chain of islands that float above a sea of clouds. There, a wise old man named Eos serves as the portal master. He has powerful magic that allows him to control mythical beasts. With their strength, he is able to keep evil at bay. Yet as the game begins, Eos is growing frail. Thats bad news for the islands, particularly when a nasty fellow named Kaos invades and then destroys the Energy Core from which Eos derives his power. Now darkness is spreading over the islands and only you--a fresh portal master--can save the day.

Spyro is one of more than 30 different creatures who will assist you in your efforts to defend the chain of islands collectively known as Skylands. If youve grown to appreciate Spyro because of his past adventures, you can enjoy a reunion with him now and meet new friends along the way. If youve never been a fan of the purple dragon, or if youve never played any of his games, theres no law saying you have to use him here. You can instead save the day with a variety of unique monsters (including a few other dragons) with one of eight elemental affinities: magic, tech, life, undead, fire, earth, air and lightning. Just know that youll have to pay for the privilege.

Skylanders ships with a plastic portal accessory and three figurines. The sturdily-constructed portal is about 8 inches in diameter and it attaches to the front of your Xbox 360 using the USB cable. No batteries are required. The cord is long enough to reach most places in your living room, for the most part. As for the figurines, theyre all quite small and you cant pose them, but theyre intricately modeled so that they truly have a collectible quality even if you dont give a hoot about the actual game. Youll start with the Spyro, Gill Grunt and Trigger Happy figurines. 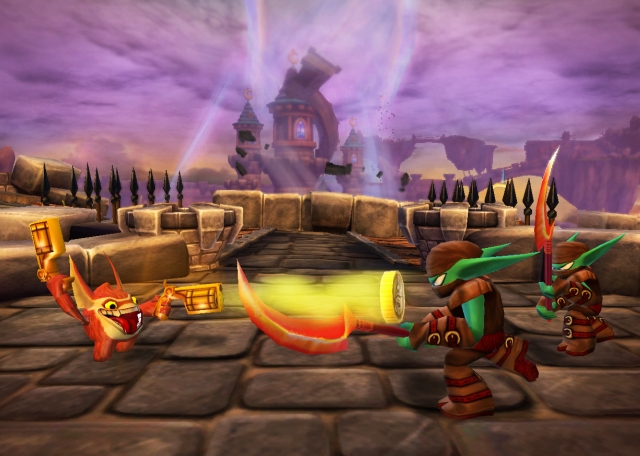 Its not possible to play the game without the figurines. You set your figurine of choice on the glowing pedestal and the corresponding character appears on-screen. As you play the game, youll gain experience points that increase your characters levels (up to a maximum of 10) and youll find currency that you can spend on useful upgrades. Every character collects both experience points and currency separately, and each character also has distinct moves that you can unlock. Furthermore, you must eventually choose one of two paths for your character to follow. All of that information is then stored within the figure so that if you take it over to a friends house, you can play there with your stats in place. Gaming platform is irrelevant as long as theres a portal base, so you might build up your character on Xbox 360 and then play with a friend who has the game for Wii.

As you play through a given level, your characters health is vitally important. There are health pickups along the way that restore your life when you take damage. If your characters health meter drains completely, though, hes out of action until you exit the stage. Should you happen to run out of characters, youll have no choice but to restart a level, which can be frustrating near the games end when some areas take around 10 or 15 minutes to clear.

Levels feature lots of loot and they all contain special areas that are locked behind gates. To pass through gates, you must have a character with the matching affinity. As long as you have such a character and he hasnt been disabled for that stage, you can simply pull the current character off the pedestal and replace it with a new one. The whole process takes mere seconds and it lets you feel like youre actively involved in the adventure. 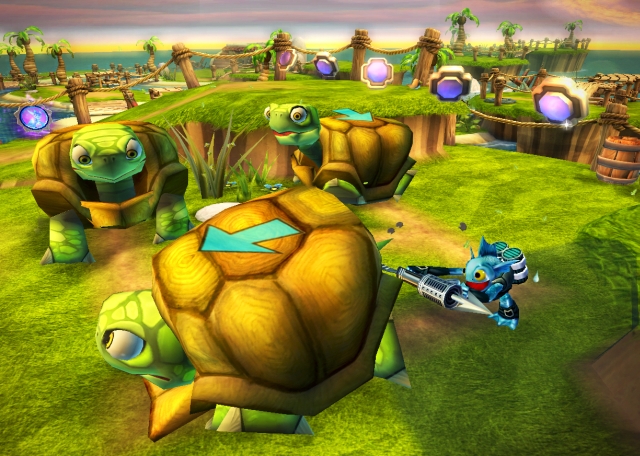 Kids should love the entire concept, and the game capitalizes on that. While every stage can be conquered using only the three characters that ship with the game, most stages feature areas that you cant access unless you have additional figurines. Given the MSRP of each figurine (around $7 or $8), youll have to spend around $40 to gain access to a character of each element. Every stage also contains discs that you can collect to gain additional special moves, even for skylander creatures you dont currently possess. Unless you indicate that youd rather not watch, youll see video showing off how much that character kicks butt with its new move. The likely result: kids will constantly be begging their parents for additional figures until they have all of them, which could easily wind up costing a couple of hundred dollars on top of the cost of the game. Another potential issue is that stores currently are having a hard time keeping the figurines in stock. You may head to the nearby Wal-Mart with big plans to expand your fleet of monsters, only to find bare shelves and an apologetic sales associate.

Assuming that you do buy some more figures, at least theres some genuine value in each purchase. The special areas that you access will typically allow you to gain new hats for your beasts that grant new stats and can make them look pleasingly silly as you summon them. Besides that, you can visit familiar regions as often as you like after completing them, in search of new loot or experience points or perhaps just for the heck of it. You can also bring a friend and tear up an environment together. Not only that, but there also are battle arenas where you can play one of three mini-games. In one, you brawl and grab special abilities as you try to decimate your opponents life meter. In another, you fight for a ball and try to kick it through a goalpost before your opponent does. Finally, the third challenge is to collect randomly-generating crystals ahead of your rival.

Skylanders: Spyros Adventure is an enjoyable but largely unremarkable game when you only factor in the core experience. Despite giving you a lot of ground to cover and a number of puzzles involving switches and crates that should challenge and delight younger gamers, the adventure can start to feel repetitive and the camera is annoying at times. Let yourself get caught up in the spirit of things, though, and youll be surprised by how addictive it all becomes. Skylanders may rely on a gimmick, but that gimmick works beautifully.

If you enjoyed this Skylanders: Spyro's Adventure review, you're encouraged to discuss it with the author and with other members of the site's community. If you don't already have an HonestGamers account, you can sign up for one in a snap. Thank you for reading!

© 1998-2021 HonestGamers
None of the material contained within this site may be reproduced in any conceivable fashion without permission from the author(s) of said material. This site is not sponsored or endorsed by Nintendo, Sega, Sony, Microsoft, or any other such party. Skylanders: Spyro's Adventure is a registered trademark of its copyright holder. This site makes no claim to Skylanders: Spyro's Adventure, its characters, screenshots, artwork, music, or any intellectual property contained within. Opinions expressed on this site do not necessarily represent the opinion of site staff or sponsors. Staff and freelance reviews are typically written based on time spent with a retail review copy or review key for the game that is provided by its publisher.