Some of us may remember TaleSpin as the high-flying action-adventure series on the Disney Channel that featured characters vaguely reminiscent of those out of the Jungle Book. It received decent reception, airing more than 60 episodes and running for almost a decade after the finale. It also earned an Emmy nomination for its introductory movie. Later, it inspired several variations, including a comic book series, and, of course, a small selection of video games.

I don't remember the cartoon as fondly as some of us might. Perhaps because I rarely watched it. But, I do remember the scrolling shooter released for Nintendo only a few months after the last episode debuted.

Like the show, you play as Baloo, the carefree bear that pilots the Sea Duck, a mono-wing flying boat used to carry cargo from the fictional Cape Suzette to other parts of the world. Eight levels present a number of challenges as you haul your freight to expecting customers.

In the first level, enemy planes try to ram you as you fly over large expanses of water dotted with oil platforms. Halfway through, you confront the infamous air pirate Don Karnage, who is hell-bent on ruining your day. You can't beat him yet, so you must evade his shots while pressing forward until he gives up. Next you must dodge bubble mortars, flying subs that rapidly dart towards you, and anti-aircraft guns mounted on the floors and ceilings of ships. Manage to survive it all and you'll confront the boss of the level  a submarine whose only vulnerability is its periscope.

The second level sees you soaring through a baseball stadium, as renegade hotdog vendors lob homing tube steak missiles at you. More anti-aircraft guns dot the ground, firing in deadly arcs. Dive into the dugout, and you're forced to wend your way through cramped corridors as you dodge proximity mines. Sometimes, the situation turns desperate, leaving you with a tough choice: continue forward and get squished between the advancing screen and the rock face, or flip upside down and fly back into the nearest mine. Conquer the dugout, however, and meet the final boss of this stage: a floating baseball that switches from an invulnerable ball that bounces around to a robotic thing that only moves vertically, firing three bullets in three predictable directions. 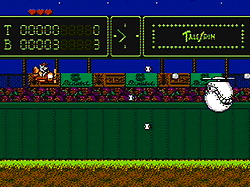 Other levels see you storming through thunderclouds blasting miniature sharks before they smash into you, cruising through a haunted house chased by ghosts that split apart into smaller pieces when shot, and climbing cliffs lined with snakes that slither into your way as you ascend. 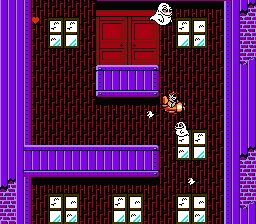 The end of level bosses are a mixed bag. Some just require you to stand in one spot, exploiting their weakness, while others involve a lot more maneuvering as you try to dodge their quick attacks and follow their rapid movements across the screen. The city features a showdown with a sentient crane that shoots a constant stream of flaming bullets, but they only reach a certain height and are easily avoided. Once you dispose of the wrecking ball that can easily threaten your life, all you need to do is stand in one spot and blast. The alligator statue found in the jungle, on the other hand, fires three fireballs in quick succession that lock onto your craft, forcing you to flit around or shoot them down. Furthermore, junglemen dart across the ground, throwing spears towards your plane without a moment's hesitation. This means you need to be incredibly fast with your reaction time, or else you'll run out of health quickly. 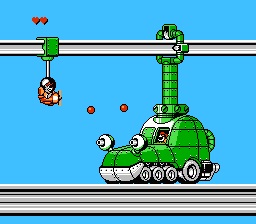 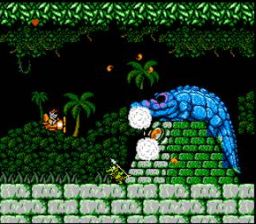 Of course, you're not really expected to power through the whole game without some help. Upgrades become available at the end of each stage where you cash in points for money, which you use to purchase weapon boosts, faster engines or extra lives and health. To maximize your return, you'll have to obtain all the extra cargo boxes and moneybags located in each level, as well as complete each of two bonus levels per stage successfully. The bonus rounds are fairly straightforward. As Baloo's sidekick, Kit Cloudkicker, you have to jump around the level collecting balloons worth a number of points. There are no enemies, but the advancing screen means you need to move quickly or else your fun will end before it even began, though thankfully at no cost to you other than missed opportunities.

Even with this, however, the game can become quite challenging. I made it to the last stage with all the upgrades except for the final weapons upgrade, which would have let me fire up to four bullets at once. When it came to the final confrontation with Don Karnage, as was expected at the beginning, I couldn't win. Even with the extra health and faster engine speed, I wasn't fast enough for him. His pattern of attack was too erratic, and he darted around the screen in circles so quickly that keeping up proved impossible. His was the challenge I had been waiting for, one that made me consider going back and trying to get that last upgrade. Because maybe then I'd stand a chance.

Not bad for a game based off a Disney cartoon.

If you enjoyed this TaleSpin review, you're encouraged to discuss it with the author and with other members of the site's community. If you don't already have an HonestGamers account, you can sign up for one in a snap. Thank you for reading!

© 1998-2021 HonestGamers
None of the material contained within this site may be reproduced in any conceivable fashion without permission from the author(s) of said material. This site is not sponsored or endorsed by Nintendo, Sega, Sony, Microsoft, or any other such party. TaleSpin is a registered trademark of its copyright holder. This site makes no claim to TaleSpin, its characters, screenshots, artwork, music, or any intellectual property contained within. Opinions expressed on this site do not necessarily represent the opinion of site staff or sponsors. Staff and freelance reviews are typically written based on time spent with a retail review copy or review key for the game that is provided by its publisher.