Saints Row: The Third (SR3) keeps one important detail in mind: the meaning of the word 'sandbox'. It invokes the spirits of the sandbox, those who love to frolic, play, laugh, and hit random people in the face with a spiked baseball bat. It isn't overly concerned with spinning a human yarn, pushing games as art, or appealing to realism. SR3 trades realistic driving physics for the ability to cause people to explode with a single punch. It takes away stringent excitement-demeaning punishments, like having the cops perpetually on your tail, so you can steal a top secret plane-helicopter hybrid and rain missiles on the new fictional city, Steelport. This isn't to say that it's a title without any consideration for smooth mechanics or challenging situations. No, SR3 is not a wimpy imitation of the real world; it's a balls-to-the-wall, tongue-in-cheek romp with killer missions complimented by stellar distractions. It's a veritable playground of insanity.

Blazing from one checkpoint to another whilst gunning down random gang members isn't enough. Volition needed to push the envelop further and dance all over the corpse of plausibility. Rather than relying solely on genre standards like racing against the clock or raiding a warehouse, SR3 takes you down such avenues as invading a bordello while naked and drugged, making for difficult marksmanship. You'll have your share of gunfights and car chases, but you'll also battle against snotty cyberpunks in virtual reality, leap off a building to escape an explosion, engage a professional wrestling champ/organized crime lord in a body-crushing bout in the squared circle, and gun down goons while free falling sky high above the city. Each mission is not one objective, but a series of two to four strung together with a decent variety of mission styles, giving each one its own identity. As such, no mission is a repeat of a previous one with added difficulty. 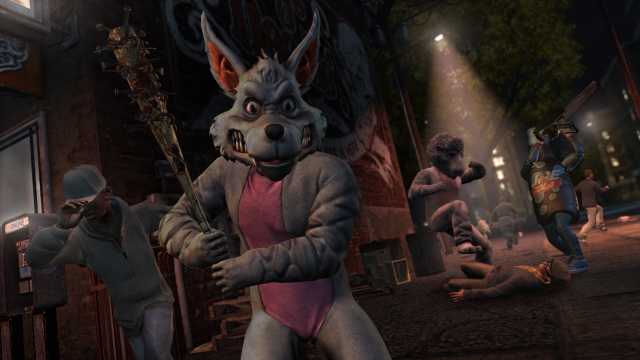 Gunning down enemies is no longer just a standard objective. Volition turned up the challenge on the combat, demanding more of your skills in precision and evasion. You have to know when to go all out, when to hold back, when to pick enemies off carefully, and when to stand and fight or just breeze past your opponents. Areas are well designed and little more fleshed out, even elaborate, allowing for more intelligently-placed enemy groups that accentuate challenge and definitely entertain. This isn't to say that SR3 is a skull-crusher, but it won't simply lie there and let you win.

It helps that enemy types are more diverse than previous genre entries, moving away from the basic 'man with a gun' or 'man with a blade'. Gigantic brutes will send your body skidding across the pavement with a single shoulder smash; masked thugs armed with high-tech guns launch a nasty swarm of explosives in your direction, easily wrecking your dream car; light speed punks zip around you, slashing you and your homies to bits with laser-blades. It'll require more than holding down the fire button to deal with all of them, and you'll find that early outings in Steelport end in death.

But the Saints know anything can be solved with money. With each side mission you complete, business you purchase, and gang operation you shut down, you'll obtain a chunk of the city. Gaining more assets leads to more money gained per in-game hour; money that can be put towards upgrading weaponry and doling out fiercer punishment to your rivals, unlocking new power ups to raise your health and various resistances, or even invested in making more money. Drop $50,000 and you can be the proud owner of an airport, drawing even more revenue. Do you want an improved laser rifle with infinite ammunition, a muscle car tricked out with all of the meanest upgrades, and a leather gimp suit complete with zipper mask? Raise more money and your wishes shall be granted! 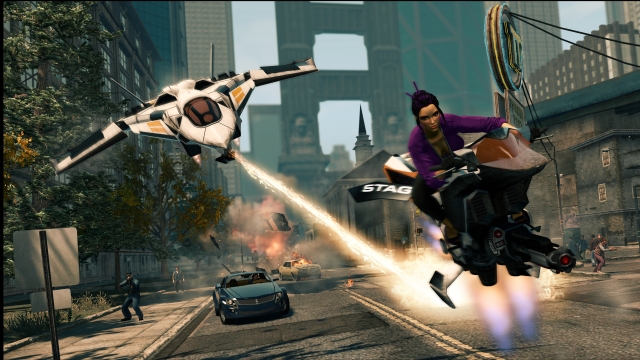 While waiting for your paycheck, you cause civil disorder with side activities. What better way to make a little extra cash than to commit insurance fraud? You too can throw yourself in front of speeding automobiles in the hopes they will send your body rag-dolling into other vehicles. After you've scraped yourself off the pavement, you can rush to Dr. Genki's Super Ethical Reality Climax for an exciting round of gunning down psychopaths in mascot suits while avoiding deadly traps. The more you shove off the mortal coil before completing the challenge, the more cash you'll earn. When cute mascot slaughter loses its flavor, you can cruise through the streets on an ATV while set ablaze in Trail Blazing. Guiding your burning body into vehicles, pedestrians and explosives, the object is to reach each checkpoint before time runs out--with death and destruction netting time bonuses.

Many might complain that each activity location only provides a single level of an activity rather than six to eight as in previous Saints games. I know I was a little let down at first, but discovered I preferred it after thinking about it. Volition trimmed the fat, cutting down the repetition. There wasn't much change from level to the next in previous games, and some were even precisely like previous levels with the exception that the cash prize at the end was a bit larger. Rather than twelve total levels with only three or so worthwhile ones, you have six total levels with all six worthwhile.

This is true about much of SR3. It's shorter than previous titles, yet it accomplishes the same and even more. Sure, Volition cut out small details like the ability to use random objects as weapons, or deeper clothing customization. But they also improved the all-around structure, crafting a much more efficient and exciting title. Cutting back on the number of missions also prevented the overuse of certain mission objectives. Ultimately, it's worth it. Not only is SR3 more efficient, but it handles better. Vehicles drive more smoothly, animation is more fluid and takes full advantage of high definition, and each scenario stands on its own. I'll gladly trade the ability to wear a tie with my hoodie for quality activities, less repetition, and improved mechanics any day.

However, there is one flaw that grinds my gears: glitches! Think there's nothing more irritating than jacking a car and then dying for no reason? Try advancing through a mission and hitting a point where your next objective doesn't load, leaving you stranded until you either die or restart from the last checkpoint. Some folks, albeit very few, have reported that they were unable to complete one the final missions because a certain objective refuses to load no matter how many times they play it. If that doesn't get your goat, try to keep your cool when neither essential menus appear no matter how many times you press 'Start' or 'Back', preventing you from manually saving or accessing new missions. Thank goodness for autosaves. These glitches are mostly minor inconveniences and fairly infrequent, but they're enough to harm SR3's shine. Volition still has a chance at redemption, thanks to the advent of patches. However, whether or not I'll overlook this one minor flaw will depend largely on whether or not Volition patches the glitches. 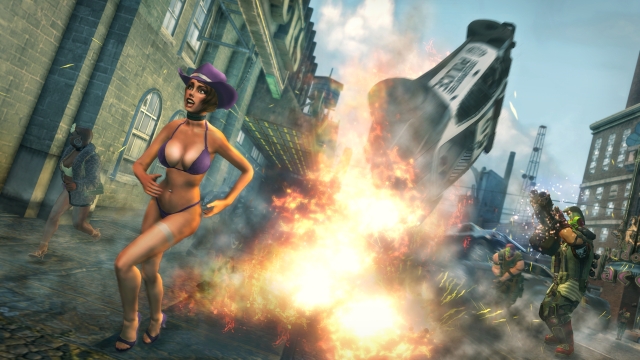 SR3 is improved insanity. It accomplishes everything it sets out to do: to entertain with measures of wackiness, lewd humor, and over-the-top action while improving upon the franchise as a whole. You don't linger in small arenas and pick off twenty of the same enemy just to race to another location and run through a basic building while doing more of the same. Missions are exciting and activities are fierce and loaded with cathartic mayhem. Volition tosses out realism for the sake of entertainment, granting you the use of high tech gadgets, vehicles and aircrafts. Lacking realism gives rise to a greater range of creativity, allowing for a wider variety of mini-games and distractions--components that make up a great sandbox title. Congrats, Volition. Saints Row: The Third is the type of game that begs for sequels and keeps a solid franchise alive. The only unfortunate thing is that it will be a tough act to follow.

© 1998-2021 HonestGamers
None of the material contained within this site may be reproduced in any conceivable fashion without permission from the author(s) of said material. This site is not sponsored or endorsed by Nintendo, Sega, Sony, Microsoft, or any other such party. Saints Row: The Third is a registered trademark of its copyright holder. This site makes no claim to Saints Row: The Third, its characters, screenshots, artwork, music, or any intellectual property contained within. Opinions expressed on this site do not necessarily represent the opinion of site staff or sponsors. Staff and freelance reviews are typically written based on time spent with a retail review copy or review key for the game that is provided by its publisher.