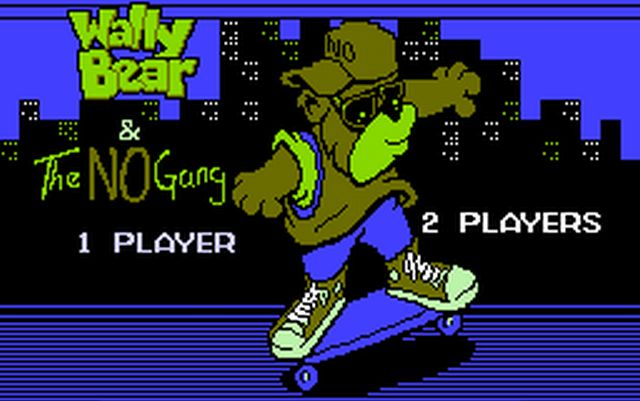 Wally Bear and the No Gang starts off in the vanilla scenery of suburbia, represented by a single no-frills side-scrolling stage. True to suburban structure, you will skateboard past the same dull houses and shops, leap over the same bulldogs, and crouch under the same Hitchcockian birds ad naseum--and all while trying to assuage a headache caused by a grating soundtrack. All that separates one scene from the next is the presence of power ups: skateboards to increase speed and flying discs to chuck at enemies.

If you haven't shut the game off by now, you'll segue into a cutscene with a horribly deformed anthropomorphic rabbit babbling about Ricky Rat and his endeavors to convince Toby Turtle to pop some pills. Ever the vigilante, Wally Bear springs into action!

...by skateboarding his way through a subway stage in which the same car has been copied and pasted about ten times. The entire level consists of you leaping/killing the same enemy as you blast through each car. You don't even wonder at this point if the developers had ever played a contemporary side-scroller, because you know they hadn't.

Your meeting with Toby Turtle isn't the illogical boss battle you'd hoped for, nor a tear-jerking dramatic development. Wally says taking drugs is stupid and Toby decides not to take them. Problem solved! Wally Bear is obviously not there to inform children about drugs, nor provide a logical basis for a straight edge lifestyle, nor even setup realistic situations or interactions, but to tell kids that drugs are bad, m'kay. The developers figured kids would listen to Wally Bear simply because he's cool. I mean, come on, he wears high tops, sunglasses, and a sideways baseball cap. Who wouldn't listen to a cartoon bear wearing the most generic "cool" getup?

Wally Bear's primary objective isn't to entertain, but to proselytize the dogma of the War on Drugs. All of the first five or so levels are nothing more than a straightforward race from left to right, with the occasional duck or jump situation. Each stage consists of the same screen or two of hazards repeatedly rehashed. It's clear the developers didn't care about the gameplay, but threw together the barest minimum they could so they could inject their anti-drug cutscenes--all of which are so laughable, poorly written, and generic that couldn't convince a hardline DEA agent not to take drugs. When a developer axes the fun from a title, they've already dug a grave for it. When they've even failed at said title's main emphasis--which they had used to excuse the lacking gameplay--they've desecrated that grave.

Wally Bear only earns points for having stable play control, which comes handy in the latter half. After a run in with Ricky Rat in an empty parking structure, you'll find yourself in the sewer for several levels of aggravating platforming. Where Wally Bear was an all-too-easy snoozer, it's now become a frustrating exercise in cheapness where you must leap from one ridiculously tiny platform to the next. Bear in mind, five lives, no continues, no passwords; and this gauntlet goes on for an eternity. Once again, we see the same situations over and over again, only this time we absolutely rue them.

Wally Bear and the No Gang is a largely broken piece. There isn't a single scenario or cutscene that reflects a true effort. There was minimal planning in regards to level design, all around game structure, and definitely little thought behind the cutscenes. Sure, American Game Cartridges wanted to keep the title simple for younger kids, but don't sell our youth short. If we want them to really use their noggins and not just nod like zombies, we need to give them the tools they need to do so; namely logic. It's our jobs as adults to teach our children how to think, not what to think.

Lesson learned from Wally Bear and the No Gang: taking drugs is reprehensible, but killing neighborhood dogs with hubcaps is a-okay!

© 1998-2022 HonestGamers
None of the material contained within this site may be reproduced in any conceivable fashion without permission from the author(s) of said material. This site is not sponsored or endorsed by Nintendo, Sega, Sony, Microsoft, or any other such party. Wally Bear and the No Gang is a registered trademark of its copyright holder. This site makes no claim to Wally Bear and the No Gang, its characters, screenshots, artwork, music, or any intellectual property contained within. Opinions expressed on this site do not necessarily represent the opinion of site staff or sponsors. Staff and freelance reviews are typically written based on time spent with a retail review copy or review key for the game that is provided by its publisher.