Here in the real world, war carries a terrible price tag. The soldiers who battle for our freedom put their own lives on hold, endure torturous conditions and all too often make the ultimate sacrifice as they protect ideals that are bigger than any of us.

As I played through the single-player campaign in Call of Duty: Modern Warfare 3, it occurred to me that no game has a real chance of bringing home the true tragedy of war. Most gamers probably wouldnt want that, anyway. As we virtually unload enough bullets to flood a landfill, our tendency is to forget that there are real men and women in uniform who engage in these activities without the comfort of illusion. Those brave soldiers dont have checkpoints to fall back on if they make a mistake, just loved ones who will mourn their passing if the worst happens. 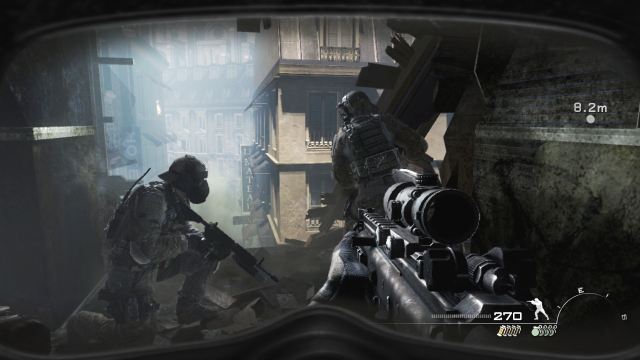 Modern Warfare 3 deserves credit, I suppose, for making me think so much about the true cost of war (such thoughts certainly werent on my mind ahead of time), but Im reluctant to call it a resounding success because Im fairly certain that my personal response wasnt the one the developers had in mind.

When Call of Duty: Modern Warfare released as the fourth in an already fantastic series, it immediately captured my imagination. I enjoyed placing myself in the shoes of the various soldiers as they blasted, sniped, ran and crawled through a variety of impressive set pieces. The technical polish on display was astounding, but even more impressive to me was the emotional connection that I established with the characters and the story. That connection that carried me through what I soon realized was the finest military shooter that I had ever played. However briefly, the game made me think about war in ways that I never had before.

When the sequel arrived in 2009, it gave me new reasons to feel invested in the outcome of the fictional third world war. As I marched through the tragic remains of a suburb in Anywhere, USA and later struggled through a shell-shocked District of Columbia, I was horrified by what I saw but thrilled by the role I played in the effort to set things right. Betrayals meant something to me. My failures mattered. I was a part of something huge and I loved that feeling.

As I worked through Modern Warfare 3, though, I simply felt tired. 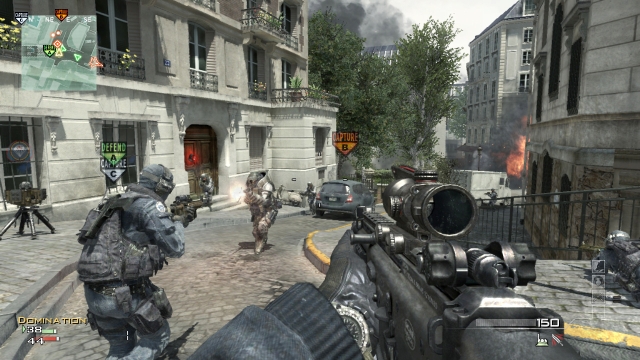 You may have heard by now that Modern Warfare 3 picks up immediately where its immediate predecessor ended so memorably. Thats true. If you havent played through that previous game, youre going miss some important references and you wont have the strong connection with the principle characters. There are flashbacks to remind you where the story left off, but mostly you just see a guy in a uniform falling to the ground with a knife in his forehead. Unless you remember the events that came previously, it feels random and is never properly explained. Then, without so much as a pause to complete a dull tutorial stages (not that Im complaining), youll immediately find yourself battling through a near-future version of New York as explosions rock buildings around you and helicopters swarm roofs lined by snipers.

Modern Warfare 3 is full of such intense moments. This final chapter in the trilogy provides what is unquestionably the purest adrenaline rush that the series has yet seen. Im left imagining someone on the development team turning a giant crank until it rests at 11 and then just leaving it there. Explosions are huge. Planes crash. Buildings collapse. There are moments that feel like they were torn out of the previous games, except here the ante has been upped. You dont just wander along aisles on a huge plane, gunning down terrorists the way you did in the first game; youwell, I dont want to spoil anything. This is a game that delivers value in the form of shocks to the system.

The unrelenting chaos wears on a person after a while, though. As the body count continued to rise and eventually those among the dead included comrades that the writers had bothered to give actual names, I began to feel that I myself had also become a victim. I stopped caring what happened because I no longer felt a connection with any of it. The explosions blurred together and became background noise. Dazed, I stumbled through one disaster after another. My critical side marveled at the visual polish, the technical wizardry that made such unrelenting madness possible, gave each explosion actual impact. I was no longer a participant, though, just a mindless drone. Fortunately, Call of Duty games dont rely solely on their single-player campaigns. Theres an abundant supply of other content, including Special Ops missionswhich are never really my thing, but they certainly add hours of value for those who dig the extra challengeand the tough-to-top multiplayer offerings. Ive sunk dozens of hours into those same modes in previous Modern Warfare titles and (schedule permitting) Ill still be playing this third installment months from now.

If youve invested much time in previous Modern Warfare titles, you already know almost exactly what to expect. Theres an assortment of spectacular maps that all feel like they must have taken forever to design. Building placement is a thing of true beauty. Every structure seems to have been considered so that you have multiple ways to approach nearly any point youd care to reach. If you just sit back sometime and watch players fan out after a match begins, its a bit like watching ants attack a pile of food left on a sidewalk. Standing around to admire things isnt really recommended, however; its a good way to get shot.

Perhaps inevitably, Modern Warfare 3 is downright nasty to players who dont bring their best game to each match. Until you memorize a particular map, youll routinely find yourself being flanked on all sides, gunned down before you even have time to think about where you can best find shelter. Multiple routes may lead to each key point on a map, but some of those routes offer more protection than others and no one on the other team is going to think twice about gunning you down if you dont put any available shelter to its best possible use. Unless youre playing along with friends (the best way to experience the game, hands down), you dont have a snowballs chance in hell until you invest some serious time. This is a game where the difference between life and death is routinely a 20th of a second in reaction time. 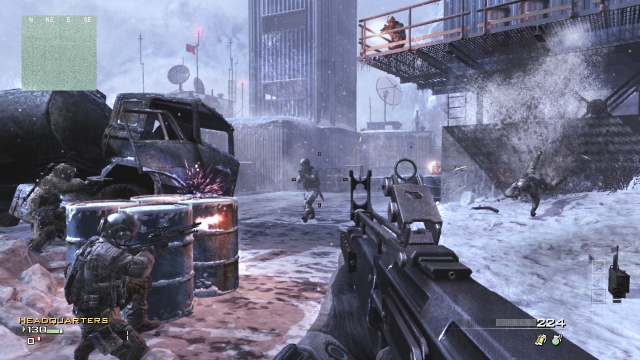 The good news is that you dont have to overcome such obstacles alone, even if none of your friends are anxious to play (an unlikely prospect, that). With a Call of Duty Elite membership, which is available in both free and paid versions, you gain access to a ridiculous range of stats that let you know where youre dying, who is killing you andby extensionwhat you might change about the way you play in order to slowly climb your way up the rankings. People who pay the annual fee (or who picked up the Hardened edition, which comes with a free code) can also look forward to additional clan features, a series of nine downloadable map packs and exclusive competitions and prizes. Call of Duty can easily wind up taking over your free time for the next year, if you let it, and the Elite service adds genuine value on top of that.

With or without the extra investment, Call of Duty: Modern Warfare 3 boasts enough content that no concise review can ever do justice to everything. Even before you see the massive wall of names in the closing credits, youll be able to tell that this product was the labor of a virtual army of talented individuals. Few games have ever provided this much value to justify your $60 investment, yet its hard at times to escape the feeling that the creative spark that once lit the fuse has been snuffed out and now were just left with the bombastic explosions. As a result, the trilogys epic conclusion is basically everything you expected but with more spectacle and less heart. Clearly, fictional war comes with a price tag of its own.

If you enjoyed this Call of Duty: Modern Warfare 3 review, you're encouraged to discuss it with the author and with other members of the site's community. If you don't already have an HonestGamers account, you can sign up for one in a snap. Thank you for reading!

© 1998 - 2022 HonestGamers
None of the material contained within this site may be reproduced in any conceivable fashion without permission from the author(s) of said material. This site is not sponsored or endorsed by Nintendo, Sega, Sony, Microsoft, or any other such party. Call of Duty: Modern Warfare 3 is a registered trademark of its copyright holder. This site makes no claim to Call of Duty: Modern Warfare 3, its characters, screenshots, artwork, music, or any intellectual property contained within. Opinions expressed on this site do not necessarily represent the opinion of site staff or sponsors. Staff and freelance reviews are typically written based on time spent with a retail review copy or review key for the game that is provided by its publisher.