I hope that I will always remember how exciting it once was to play GoldenEye 007 on the Nintendo 64. Until dementia or death takes the memories away, Ill fondly recall the four-player matches in the college dormitories where everyone in the room except for me was drunk or high and I was dominating one round after another using just the pistol. Less fondly, Ill recall single-player games where I tried to escort Natalya through a jungle and she kept walking into turret fire or picking fights with goons toting automatic weapons while she herself may as well have been armed with only a peashooter. Ill remember struggling to shoot locks off a plate of metal so that I could escape a train and Ill remember wandering around the archives building for hours, unsure of where Id been and where I was going.

I know that Im not the only old school gamer who cherishes such memories. To this day, if you ask a group of long-time Nintendo fans to name their favorite Nintendo 64 games, GoldenEye will be mentioned early in the following discussion. The game is an icon, so of course someone eventually got around to remaking it. That inevitable effort was last years GoldenEye 007 for Wii. I meant to play that one, but I never got around to it. Which is okay, it turns out, because this week Activision released a visually-upgraded version for Xbox 360 (and for PlayStation 3). Now Ive totally made up for my initial failure. 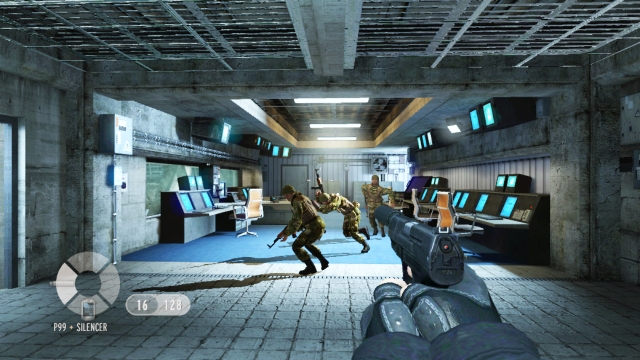 The first thing you need to know about GoldenEye 007: Reloaded is that its a gussied up version of the Wii title, not the Nintendo 64 edition. Youre due for some disappointment if a current-gen trip down memory lane is what you wanted. Development duties this time around were assumed by Eurocom (the same developer responsible for many of the EA-published 007 titles from the GameCube and PlayStation 2 era), which results in a familiar and polished experience that expertly caters to the nostalgic among us while providing everyone else with compelling new reasons to play.

Despite providing a great foundation, Reloadeds history also works against it. Both the Xbox 360 and the PlayStation 3 are capable of producing incredible architecture and expansive environments like those youve seen if you played something like Assassins Creed or Grand Theft Auto IV. Nintendos little white box lacks that sort of horsepower, which naturally informed level and scenario design. Youll find a lot of confined spaces here, serviceable but largely unremarkable areas with limited real estate that fail to provide a grand sense of scale.

The developers also appear to have made their peace with a number of less significant technical quirks. Your play style will affect how many of those you encounter. I often find myself involved in shootouts with goons where I use a doorway for shelter so that I can pause to recover. During such shootouts, youll often see the circular nicks that bullets produce when they slam against stone walls. The problem here is that those nicks often appear and then float inside the doorframe, without a surface to cling to beyond pure oxygen. They serve as a jarring reminder that nothing youre seeing is real. 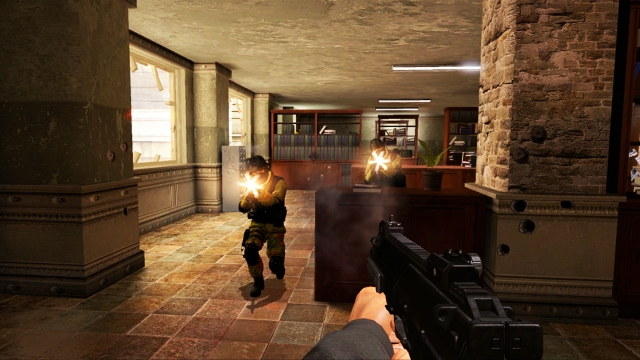 Elsewhere, youll strike an enemy with a melee attack and hell buckle backward even though no contact seems to have been made on-screen, or youll find a texture that provides painted-on dimensions to what is clearly meant to be a three-dimensional object (but which was never rendered as such). It doesnt happen often, but its always distracting when you see a small element of the architecture--a fire alarm, for instance--that looks like it was painted on in a hurry.

While issues like that are disappointing, they dont prevent Reloaded from telling a terrific story more effectively than perhaps any 007 title before it. When I played the original iteration of GoldenEye, following the plot proved difficult because I hadnt seen the movie. Years later, I still havent seen the movie but now I was easily able to follow along because the voice work and character models are generally well-produced. Who knew that Natalya was actually a gorgeous woman and not a Chris Farley lookalike? I cant help but wish that Pierce Brosnan had stepped back into his familiar role to add to the classic feel, but Daniel Craig does a fine job as the new face of James Bond.

Visual improvements arent all that you should expect, either. Stages may feel generic, but they now flow in a more natural fashion and enemy placement was more carefully considered to provide interesting challenges. Its clear that youre going through the same motions you always did, but now those motions are more enjoyable. Late in the game, I was delighted to find that I actually enjoyed protecting Natalya when the need arose. With the exception of the frustrating final area, which mostly requires trial-and-error experimentation until you figure out the route that you must take through the middle of the stage, most of the game is a testament to just how far shooters have come. 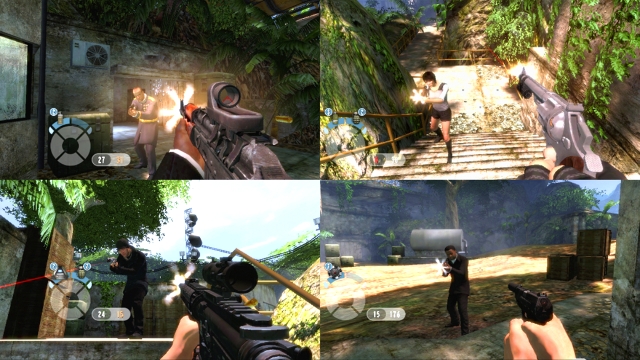 While a lot of recent titles within the genre provide the commendable flair as a substitute for volume of content and replay value, thats not the case here. I played through the entire campaign on the default difficulty setting (Operative). I would mostly describe the process as relaxing, aside from a few hiccups. However, several additional difficulty settings are available for those who want more. The advanced modes add extra objectives that force you to play levels differently than you would on a lower setting. The Classic setting is especially welcome. Your health no longer regenerates and instead you must rely on item pickups, like you would if you were playing the Nintendo 64 version. Thats a nice touch.

Multi-player modes also received a lot of attention, though presently it would seem that they still didnt receive quite enough. There are both local and online modes, but I tried several times and I was only able to play local games because I kept getting booted immediately if I tried to join an online match. Ive heard of other gamers having the same issues. The interface seemed decent enough, so I expect that GoldenEye will provide a fantastic online experience once server troubles are resolved. Even then, I may keep playing offline instead of venturing onto the Internet. If I learned anything in college, its that GoldenEye is better when youre seated in the same room as your opponent when you take him down with just a pistol.

Some people will tell you that GoldenEye didnt need to be remade. It was once good enough to provide memories that will last a lifetime. Shouldnt that be enough? Perhaps it should, but the reality is that gamers always like newer and shinier things. GoldenEye 007: Reloaded may not fill a new generation of gamers with wonder, but its a high-definition homage to the best of the classic 007 titles and it proves that being a virtual spy can be fun even in these complicated times. Sometimes, its nice just to find a new reason to remember that.

If you enjoyed this GoldenEye 007: Reloaded review, you're encouraged to discuss it with the author and with other members of the site's community. If you don't already have an HonestGamers account, you can sign up for one in a snap. Thank you for reading!

© 1998-2021 HonestGamers
None of the material contained within this site may be reproduced in any conceivable fashion without permission from the author(s) of said material. This site is not sponsored or endorsed by Nintendo, Sega, Sony, Microsoft, or any other such party. GoldenEye 007: Reloaded is a registered trademark of its copyright holder. This site makes no claim to GoldenEye 007: Reloaded, its characters, screenshots, artwork, music, or any intellectual property contained within. Opinions expressed on this site do not necessarily represent the opinion of site staff or sponsors. Staff and freelance reviews are typically written based on time spent with a retail review copy or review key for the game that is provided by its publisher.