I've been reading about how the new Batman game, Arkham City is being widely considered a nice step forward from its predecessor, Arkham Asylum. In theory, that's how things should be in gaming. A company puts out a game and then refines and improves their formula for future releases.

Unfortunately, things don't always work out that way. Beenox's Spider-Man: Edge of Time seems more like it's simply piggybacking off 2010's Shattered Dimensions in a way that makes it seem more like a fairly lengthy expansion pack than an actual stand-alone game. It does things right, but Shattered Dimensions did them better and to a larger degree, which is a shame as Beenox earned the rights to Activision's Spider-Man games after doing such a good job with that title. It almost reminds me of the professional athlete whose performance declines immediately after signing that fat contract and being set for life. 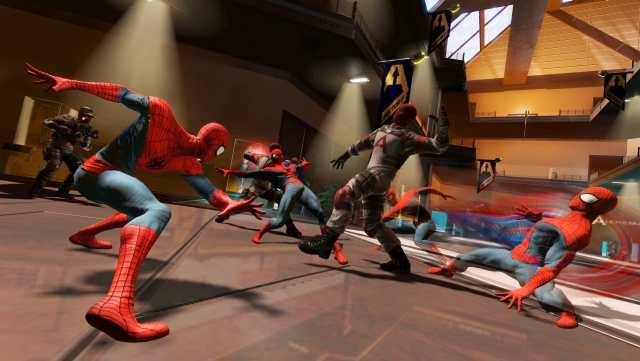 Part of the issue is in Edge of Time's structure. For me, Shattered Dimensions was like the cartoons I watched when I was young. Each stage revolved around one particular villain and had its own look and enemies. You also had four different versions of Spider-Man. Sure, the Noir incarnation was the only one that played different from the norm, but when everything seems different on an aesthetic level, it's easy for players to ignore that they're doing little more than beating up hordes of generic thugs with the occasional boss fight sprinkled into the mix. If each level LOOKS different from the rest, then it has to be! Shattered Dimensions had a bunch of self-contained levels that greatly entertained me to the point where I didn't care that the overall plot just seemed thrown in as an excuse to have Spidey fight a bunch of villains.

Edge of Time cuts down on the variety and makes the story more of a focus. The modern day's Amazing Spider-Man teams up with the 2099 version to stop a futuristic scientist from achieving his time travel dreams  namely going back in time to start up the Alchemax corporation, so that it (and he) would be an unstoppable force of world domination by the future. The beginning of the game sees this guy succeed in that goal almost immediately, so it's up to the Spider-Men to go through each era's Alchemax building to try to reverse things and preserve the natural flow of time. While there are some interesting twists to the storytelling, putting more energy into that didn't seem to help the rest of the game. 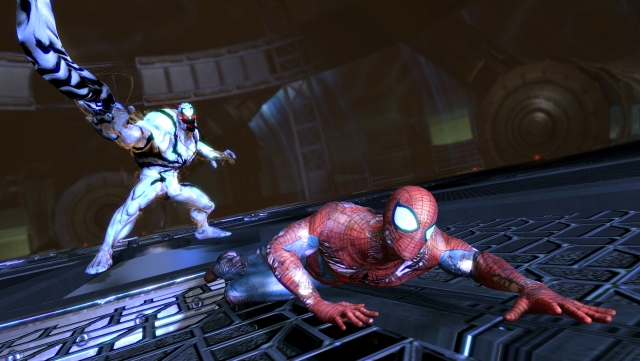 Regardless of whether you're controlling the present-day or futuristic version of Spider-Man, you'll be essentially doing the same things in the same locales. A lot of corridors and rooms containing security guards, robots and automated guns will be your playground, as you travel on rails. Pretty much 90 percent of this game can be summarized in a handful of bullet-point paragraphs.

 Brawls for keys. There are many locked rooms in this game. Despite Alchemax being a futuristic corporation, these doors are locked with actual keys that are held by random guards and robots. So, you'll enter rooms and have to fight a dozen or so guys with one of them holding a key. Some of these doors require three keys. This means you'll be fighting more groups of enemies before being able to move to the next area.

 FREEFALL! Like in Shattered Dimensions, the 2099 Spider-Man has segments where he freefalls for an eternity or so with you controlling him so he doesn't splat against too many girders (or other obstacles). They seem tougher in this game and are more integrated into the plot, leading to some very tense moments such as the three-part freefall mission to save a particular character from perishing as the elevator she's in plummets down a shaft. At the very least, I can say that these parts of the game were the ones where I was most likely to be perched on the edge of my couch completely focused on what I was doing.

 Dealing with lasers and guns. You'll find security lasers all over the place. Red ones zap you for a certain amount of damage, while blue ones spin around set paths and trigger machine guns to blast anyone who walks into them. Also included in the automated security system are various guns that send bullets, fire and missiles towards you. The missile-launchers can be used to blow open certain sealed doors, as one of your moves involves creating decoy Spider-Men to lure enemies and attacks; but for the most part, these things exist to make whatever you're doing a bit trickier.

 Timed missions. These spring up now and again and often are used to illustrate how actions in one time period can influence how things turn out in the other. Early in the game, 2099 Spider-Man is getting abused by a big robot that's apparently too powerful for him. Controlling Amazing Spider-Man, you'll have to destroy a prototype of that robot to prevent it from ever being created. So, you'll have a couple minutes to fight off enemies and smash enough parts of the prototype to save the 2099 version before he gets killed. Other ones involve timed locks on doors where you have to unlock them from a computer and then quickly get to the door before the lock reactivates.

When not churning through any of these challenges, odds are you're crawling through vents to get to one of them. While a lot of things in the game are fun, it does get repetitive after awhile, especially since most of the locales are similar in appearance and populated with the same limited set of adversaries. 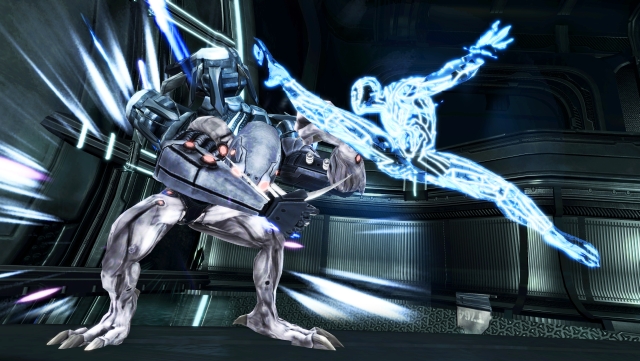 The game tries to alleviate this by allowing the player to collect energy orbs and golden spiders to unlock a variety of power-ups; as well as giving a few optional challenges in each level. The only problem  like so many other aspects of this game, this all feels like stripped-down versions of what we were given in Shattered Dimensions. The Spider-Men of that game seemed to have more moves available to them than the ones in this one and the Shattered Dimensions challenges seemed more integrated into the game  in fact, some of them simply involved completing mandatory tasks for points towards buying new power-ups. I don't know if I can put a finger on the exact reason why, but I didn't feel so compelled to even try challenges in this game as I had in its predecessor.

Or maybe I can. While I found Shattered Dimensions to be a fun game with a dozen or so varied levels that featured a number of classic villains, Edge of Time kept things confined to the inside of a giant building. This game has the same sort of camera problems that the previous did, but they're magnified here because of how cramped the confines of corridors can be, which caused me to remember how useful the wide-open arenas of Shattered Dimensions were for avoiding things like getting caught on walls.

This game's a reasonably entertaining brawler with good presentation (I loved how the opening credits were displayed on walls and buildings while 2099 Spidey was crawling through vents) and voice acting. It just isn't a worthy successor to Shattered Dimensions, a game I enjoyed so much that I've dropped its name a whopping TEN times throughout this review. Edge of Time just seems to be that game on a smaller scale. Half the number of Spider-Men battling through a bunch of short chapters taking place in the confines of a gigantic building isn't what I expected from its successor. Taken completely on its own, this game is a reasonably competent use of a license, much like the games based on various DreamWorks movies like Monsters vs. Aliens (interestingly enough, also designed by Beenox). It just isn't something special, which disappoints me, as like most people who played Shattered Dimensions, I was hoping for something on that level, if not an improvement. Eh, maybe next time

If you enjoyed this Spider-Man: Edge of Time review, you're encouraged to discuss it with the author and with other members of the site's community. If you don't already have an HonestGamers account, you can sign up for one in a snap. Thank you for reading!

© 1998 - 2022 HonestGamers
None of the material contained within this site may be reproduced in any conceivable fashion without permission from the author(s) of said material. This site is not sponsored or endorsed by Nintendo, Sega, Sony, Microsoft, or any other such party. Spider-Man: Edge of Time is a registered trademark of its copyright holder. This site makes no claim to Spider-Man: Edge of Time, its characters, screenshots, artwork, music, or any intellectual property contained within. Opinions expressed on this site do not necessarily represent the opinion of site staff or sponsors. Staff and freelance reviews are typically written based on time spent with a retail review copy or review key for the game that is provided by its publisher.