My earliest memories of Frogger revolve around the summer day when I took a stroll along the gravel road to the neighbor kids house. He had an Atari 2600 (or was it a 5200?), and even though I owned an NES that featured all sorts of cool games with mind-blowing graphics, I was quite willing to sample software on systems that werent as cutting-edge as what I had at home. That was especially true when my schoolmate pulled out Konamis classic game about a frog trying to cross the road and a nasty swamp. I found the whole experience mesmerizing. Some of that days wonder remains with me even now, waiting to be revived each time I hear the familiar jingle or see the lettering on the side of an old arcade cabinet in a dimly-lit pizzeria.

Frogger 3D, the latest installment in the classic franchise that I once enjoyed so much, appears to have been designed specifically for people like me. Ive played games long enough and often enough that now it sometimes feels like theres nothing new to see thatll ever stack up to the stuff I was playing two decades ago. Increasingly, I find myself getting the most enjoyment out of games that are updates to the digital conquests of my youth. Like so many other gamers my age who just never gave up the habit, I am always ready to abandon todays flash and flair in favor of something basic and fun. Its probably not a good sign, then, that Frogger 3D didnt utterly captivate me. 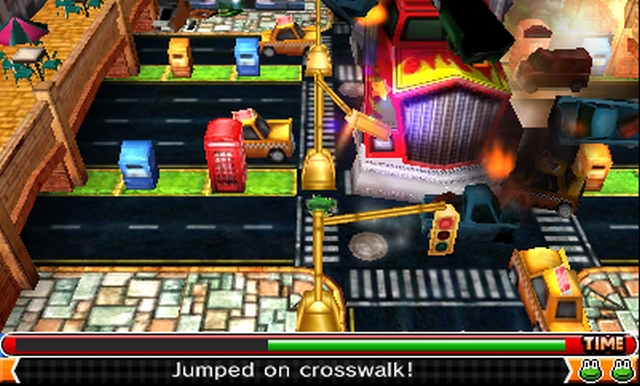 Perhaps the change in setting is part of the problem. Although Frogger 3D eventually covers all of the same ground as its predecessors--and much more on top of that--the early stages only capture that content in pieces. The first few levels in the single-player campaign are devoted almost entirely to crossing crammed city streets and climbing around crates, for instance. Cars race back and forth across the screen, or up and down if the road is pointed in a different direction, and you have to time your movements so that you can negotiate the gauntlet without winding up a monstrous stain on someones windshield or grill. The goal is positioned somewhere in the middle of all of that mayhem, a glowing beacon that no sane frog could possibly resist.

As in classic Frogger, though, simply reaching the goal isnt enough to win or even improve upon the day. When you arrive at your initial destination, you are taken back to the start of the level and a second target area is provided. This one is more difficult to reach than the last one was, thanks to less convenient placement (kind of like in the old game where it was easy to get to the two middle bases but the ones on the left and right required much more careful timing and a bit of luck). There also are now coins that you can grab along the way and those allow you to unlock later stages--which can also be unlocked by completing the preceding challenges--and an extra game mode. Coins are mostly lying about to increase the risks youre willing to take as you try to reach that second goal and then find that theres a third one waiting in the wings.

While its easy to appreciate that the developers were holding true to the classic convention, its easier still to appreciate the fact that they dont require you to reach the once-standard four goals in order to clear a stage. Three goals amount to enough tedium, especially in some of the less engaging or more convoluted stages. For example, there are a number of particularly offensive levels in World 3. In one case, you must ascend a slot machine while avoiding dropping coins. Then you have to stomp on three buttons to stop the slots at just the right time and win a jackpot so that the goal will appear and you can tag it. If you mess up too often, you run out of time. If you run out of time or get hit by coins or whatever else, you might have to restart the stage and that means patiently engineering another few jackpot wins. It doesnt feel quite fair. 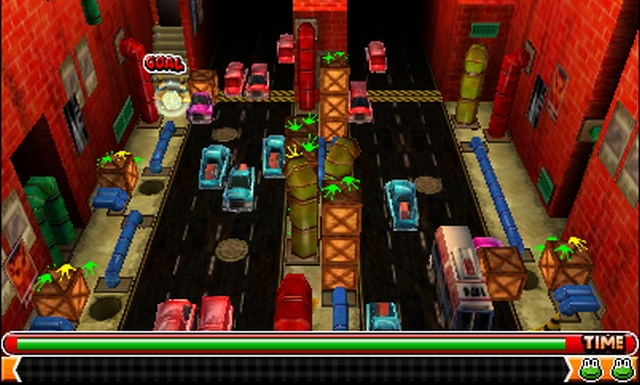 There are other moments that feel less than fair, as well. Its always been the case with Frogger games that venturing too close to the edge of the screen puts you at greater risk because you have less time to react if something enters suddenly from the side, but in Frogger 3D you also have to worry about late arrivals along the top and bottom of the screen. In some areas, that can get downright cheap. Youll be in the middle of a lane of traffic with no room to dart to the side and suddenly a huge semi rolls along the road, flattening everything in its path. A smart player will time his rushes for the moments following that semis appearance, but a player who is fresh to the stage might not even realize that the truck will be coming.

Fortunately, theres also plenty of good news to go around. The example I provided with the slot machine shows how things went wrong in cases where the developers got too imaginative, but there are also plenty of situations where youll find yourself playing through something fiendishly clever and youll realize that its a perfect extension of the classic gameplay. Of particular note are the stages that finish up each of the worlds. To complete the first world, youll have to flatten the tires of a huge truck (the same one that elsewhere has been squishing frogs, I like to think) by pushing a spike strip into its path. The second world concludes with a harrowing ride atop several trucks as you avoid low-hanging signs, eagles and holes. 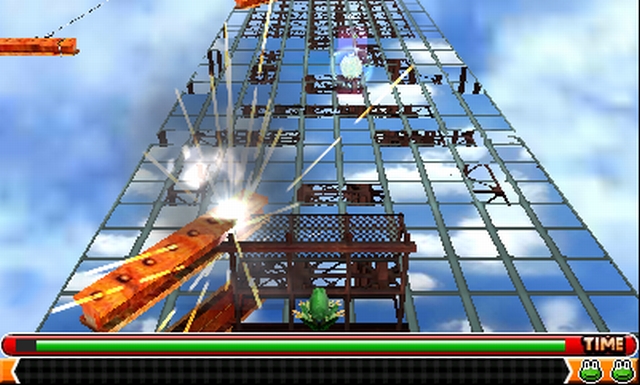 In some ways, Frogger 3D feels as much like a puzzle game as it does an action title. There are cases where youll have to try a stage a few times before you figure out--for instance--that you must hop on the back of one of your larger frog friends and quickly gobble up cherries before his timer expires so that you can then hop through a space that the large fruit blocked. Elsewhere, stages can have multiple exits and you have to figure out how to reach them if you want to most conveniently experience every one of the 60 or so stages in the game. Since high scores and rankings on stages are also saved, thats another way that you can challenge yourself and have fun playing long after youve beaten a given zone. Theres also an endless endurance mode where you can hop along an infinite number of streets and ponds pulled directly from the original Frogger.

Throughout the years, Konami has tried a number of tricks to make Frogger relevant for a fresh audience. Some of those attempts have fared better than others, but nearly all of them have complicated the play style too much. The result was typically something that strayed too far from its roots. Frogger 3D avoids that particular trap. While imbuing this new project with greatly improved visuals and a wider variety of stages and challenges, the developers at Alpha Unit also showed uncommon respect for the core elements that made the original title so much fun to experience. For all of its shortcomings, theres the distinct possibility that this is the best implementation of the classic Frogger formula that the world will ever see. Whether or not thats enough to warrant a purchase really comes down to how much of a kick you figure youll get out of seeing a frog revival, the price on the sale tag and possibly your proximity to a working Atari console.
3/5

If you enjoyed this Frogger 3D review, you're encouraged to discuss it with the author and with other members of the site's community. If you don't already have an HonestGamers account, you can sign up for one in a snap. Thank you for reading!

© 1998-2021 HonestGamers
None of the material contained within this site may be reproduced in any conceivable fashion without permission from the author(s) of said material. This site is not sponsored or endorsed by Nintendo, Sega, Sony, Microsoft, or any other such party. Frogger 3D is a registered trademark of its copyright holder. This site makes no claim to Frogger 3D, its characters, screenshots, artwork, music, or any intellectual property contained within. Opinions expressed on this site do not necessarily represent the opinion of site staff or sponsors. Staff and freelance reviews are typically written based on time spent with a retail review copy or review key for the game that is provided by its publisher.