Sometimes I want to give into my most basic desires.

I want to wear a Dickies jumpsuit and work on a car, put in a hard day's work at a blue collar job, and then come home and eat a hearty meal with grime, car grease, dirt and sweat still caked in layers on my hands. That dinner would consist of a bleeding steak wrapped in bacon and a few beers, followed by ice cream covered in nuts and chocolate sauce. After that I'd like to jump into a plane and fly off to a far away country where I can gun down an oppressive regime while belting out cheesy one-liners. It's times like these that I don't want in-depth strategy or witty puzzles, or anything other than explosions, gunfire and mayhem. 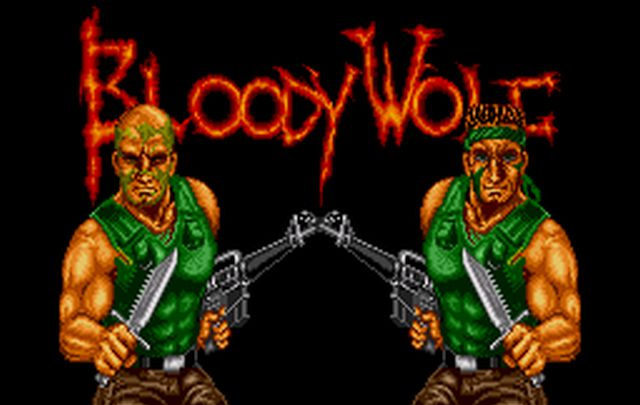 Before duty called and medals were honorable, wolves bathed in blood.

What better way to sate testosterone-injected desires than to spend an afternoon slaughtering millions of copies of the same guy? Bloody Wolf plays like many others of its ilk--games like Guerrilla War or Heavy Barrel--yet has that extra ridiculous kick. You don't simply gun down baddies. You burn them, blow them up, stab them, and even run them over with a motorcycle. Yeah, you remember that major police action the US lead where soldiers ran over the opposing forces with motorcycles?

Enemies don't hit the ground and flash when they die. They grasp the gory open wound, take a moment to examine the blood on their hand, then thrust the hand toward the sky as if cursing their creator for fating them to cross paths with you. It's one of the many ways Bloody Wolf strokes your ego. Playing as a muscle-bound commando badass on a motorcycle apparently isn't enough of an ego boost.

Ah, but if the only the game started out ridiculous. The early stages can be described as modest. There aren't many more commandos on the field than you can handle, most of the situations don't ask of you anything more than to dodge a bullet or to and shoot up a few standard baddies, and the power ups you receive are decent. Now and then the game will flood you with enemies, as it does after the mid-boss of the first stage. Gunning them down isn't a problem, but doing so without taking a tomato-shaped bullet to the face is the tricky part. Bloody Wolf does one thing many lesser war games weren't able to: it gives you boat-loads of bullet dodging, but with responsive controls there's no fear of dying because of a bullet you couldn't logically dodge. It stacks the deck against you big time, but doesn't cheat you. To help compensate for the lack of additional help, the developers carefully placed typical power ups like a shotgun, bazooka or even a flamethrower to help even the odds and up the destruction factor. There's nothing more satisfying when you're pinned in a corner than taking out several bastards with a bazooka shell.

But just as you think you're going to quench your blood thirst, the Bloody Wolf slips back into easy mode. It doesn't really pick up until after the third level. From there it's balls to the wall ridiculous. In the fourth level you storm a compound holding the president, and enemy forces will surround you by the scores. Flamethrower-toting assholes block your path with tongues of fire and grenade-tossers keep you on your toes with plentiful explosions. Every bullet, every enemy demands precise aim (or a lot of wild shooting and hoping) and skillful dodging as well as aggressive combat. When you get to the boss, your character thinks it necessary to fight him using only a knife. And what kind of weapons does the boss get? A powerful gun that shoots fireballs and metal boomerangs. Believe me, it's a trip through hell.

Win the fight and rescue the president and your character won't put the knife away and opt for the gun. You'll have to escort the president back to the beginning of the stage and fight off twice the number of enemies while still only using a knife! That might sound like too much of a task, but thought of playing a crazed, Rambo-looking mofo fighting off dozens of troops while probably frothing at the mouth and snarling was what guaranteed that I'd see this game to the end.

When thinking back on it all--having yet another knife fight with a psychopathic murderer in a grass hut, speeding down a river on a raft while dodging swarms of bullets and grenades, fighting two difficult tank bosses, and charging up a mountain while blowing away troop after troop only to have a climactic battle with a gargantuan sniper--I'm glad I had the experience. I probably would never have had it if not for those infinite continues. And Bloody Wolf implements this system wisely by not having you respawn where you die. Instead, you respawn at designated checkpoints so as not to disrupt the challenge.

If I could point out any other qualms, it's that you must complete the whole affair in one sitting. This is one game that, albeit short, would have benefited from passwords. Even though the levels aren't a hundred mile hike, the difficulty is tough enough that beating it in one go is not an easy task. For newbies, the game could last a few hours.

Bloody Wolf is an old school war game worth experiencing. It's for those of us who want some blood with our steak. Unlike lesser war games (Ikari Warriors comes to mind), it sports responsive controls and keeps the difficulty fierce without going overboard. Bravo, Data East. Holy crap, I never thought I'd say that!

If you enjoyed this Bloody Wolf review, you're encouraged to discuss it with the author and with other members of the site's community. If you don't already have an HonestGamers account, you can sign up for one in a snap. Thank you for reading!

© 1998-2021 HonestGamers
None of the material contained within this site may be reproduced in any conceivable fashion without permission from the author(s) of said material. This site is not sponsored or endorsed by Nintendo, Sega, Sony, Microsoft, or any other such party. Bloody Wolf is a registered trademark of its copyright holder. This site makes no claim to Bloody Wolf, its characters, screenshots, artwork, music, or any intellectual property contained within. Opinions expressed on this site do not necessarily represent the opinion of site staff or sponsors. Staff and freelance reviews are typically written based on time spent with a retail review copy or review key for the game that is provided by its publisher.